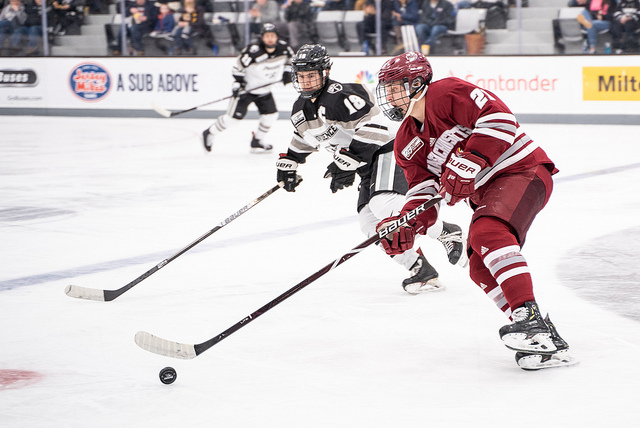 PROVIDENCE—In November, the Massachusetts hockey team beat Providence twice, both by scores of 3-2.

Three months later in the rubber match between the two top-10 squads, the final score was 3-2, the only difference being it was the Friars who skated away with the win this time around.

Scott Conway scored the game-winner at 17:04 of the third period after his shot trickled past Minutemen goalie Matt Murray in Providence’s (19-9-5, 12-7-2 Hockey East Association) win Saturday night at Schneider Arena.

Cale Makar started the scoring for No. 2 UMass (24-7-0, 16-5-0 Hockey East) in the first period after stealing the puck from a Friar along the Minutemen blueline. With open ice in front of him, Makar took it, raced in on Providence goalie Hayden Hawkey and lifted a beautiful backhander into the net to give UMass a 1-0 lead at 11:04 of the first period.

The Friars tied it up on a goal from Jason O’Neill following an odd-man rush into the Minutemen zone a little over six minutes into the second period.

Just over two minutes later, Josh Wilkins put Providence ahead 2-1 after slamming in a loose puck along the crease.

Captain Niko Hildenbrand evened the score with his third goal of the season, beating Hawkey five-hole with a shot from the slot. Colin Felix sent the initial shot on net but the puck never reached Hawkey and Hildenbrand was in the right place at the right time to tie at 2-2.

“[Brett] Boeing probably had five scoring chances, he seemed to have the puck a lot around the net. Niko [Hildenbrand], that’s a huge goal and [Kurt] Keats played heavy so that helps when your third line is almost your best line in the game,” Carvel said.

The third period offered numerous chances to both squads but it wasn’t until Conway’s wrist shot from the hashmarks that either team capitalized.

The power play wasn’t going for either team as the Minutemen finished 0-4 with two shots while the Friars went 0-5, with a major penalty included in the mix, and seven shots.

UMass lost Mario Ferraro about midway through the first period after the defenseman was assessed a game misconduct for hitting from behind.

“I think Ty Farmer really stepped up,” Carvel said about his defensemen following Ferraro’s departure. “Colin Felix and Jake McLaughlin, the guys who don’t get a lot of the publicity, I thought those three played extremely well tonight, extremely hard.

“Mario’s our toughest, hardest guy back there, he never runs out of energy so when you lose him it’s almost like losing two players.”

The Minutemen outshot Providence 36-30 with Jake Gaudet and Boeing each recording a team-high six shots on goal.

In his fifth straight start in net, Murray turned aside 27 Friar shots in the losing effort.

“Every time we’ve lost a game we’ve learned a lesson and got better,” Carvel said. “Since Lowell, I think we’ve gotten a lot better without the puck and tonight is an extension of that.”