No. 2 UMass shut out by No. 15 UMass Lowell in best-of Hockey East matchup 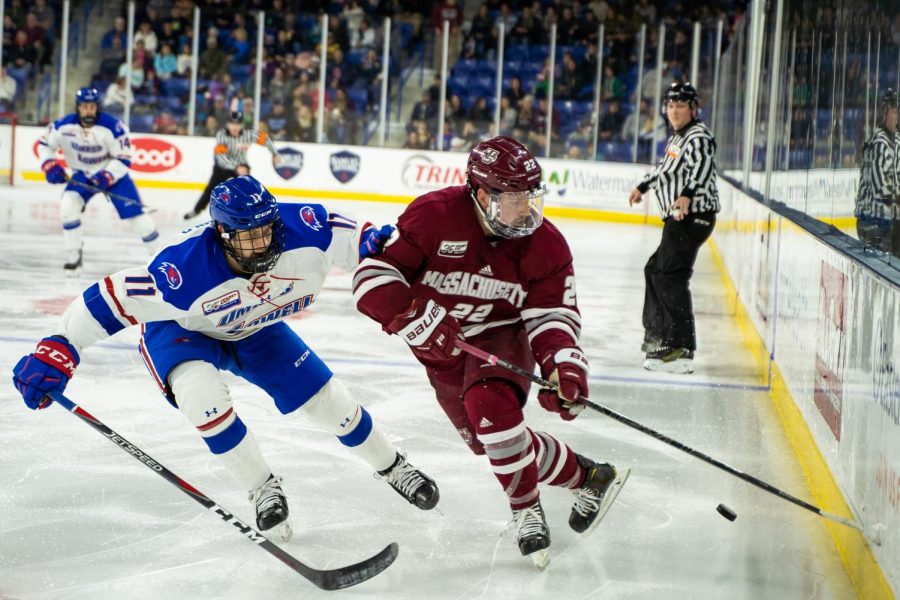 LOWELL – In a marquee Hockey East matchup, the No. 2 Massachusetts hockey team was shut out by No. 15 UMass Lowell Saturday night at Tsongas Center after failing to overcome two, first-period goals that helped the River Hawks extend their unbeaten streak to 10 games in 2019.

The Minutemen (21-6-0, 13-4-0 Hockey East Association) were outshot in two of the three periods and struggled in the faceoff dot, finishing with a 28-40 disadvantage from the circle.

UML (17-8-2, 11-4-2 HEA) has been the team to beat in the second half of the season, as the River Hawks have shut out opponents in three of their last four contests at home. The win puts the River Hawks two points below first-place UMass in the Hockey East Standings.

“Our strength coach has a real thumb on the pulse of our team, and I asked him before the game ‘do you think they’re ready?’” coach Greg Carvel said following the loss. “And he said ‘I don’t know, I can’t tell.’ So, that’s not a good sign.

“I tried to get them revved up before the game and I don’t know [what happened], because we were ready to play last night,” he added. “This was for first place and I know we’re still in first place, but this would’ve really separated us from the pack.”

Carvel said he hoped the Minutemen would treat the matchup as a playoff-like challenge but felt that they weren’t ready to play. He anticipated a low-scoring game but was disappointed in the early goals his team let up.

Five of the first six shots of the game belonged to the River Hawks as they controlled the pace early. Shot number seven went in for Chris Schutz as he wristed the puck right over Matt Murray’s shoulder 2:12 into the first.

The early tally ignited some speed in the Minutemen, leading to lengthier possessions as the period went on but nothing would connect for UMass. By the end of the first, UML had hit its stride again and Anthony Baxter one-timed a drop-pass to the back of the net for the two-goal lead.

In the middle frame, both teams earned a man-advantage opportunity and failed to capitalize– an area both squads struggled with all night. UMass couldn’t get a shot off until six minutes in and failed to generate any quality scoring chances. The River Hawks played aggressively in the neutral zone, breaking up any momentum headed toward netminder Christoffer Hernberg.

“I give Lowell a ton of credit, they’re obviously the best team in our league right now,” Carvel said. “They play extremely well defensively and wait for their opportunities. Offensively, they’re heavy and strong around the net, and they were better than us in those areas tonight.

“We weren’t ready to play a playoff-style game,” he added. “I think as the game wore on we kind of played more accordingly and finally in the third period I think we got more shots than they did.”

But Carvel could see the comfort in UML’s play with the 2-0 lead under its belt and credited the squad for finishing out with “strong, defensive hockey” that made it difficult for his team to make any sort of comeback. The Minutemen did hold a 13-5 SOG advantage in the third, but it wasn’t enough.

John Leonard had a team-high four shots and one of the Minutemen’s best chances of the night late in the final frame on a partial breakaway that Hernberg denied with his pad. Hernberg finished with 31 saves while Murray turned aside 32.

UMass continues play with a home-and-home series against Boston College next weekend, beginning with a 7 p.m. start on Friday night in Amherst before traveling to Boston for an 8 p.m. start on Saturday.