No. 3 UMass storms back, sets program record with 22nd win

The Minutemen defeat the Eagles for the first time since 2013 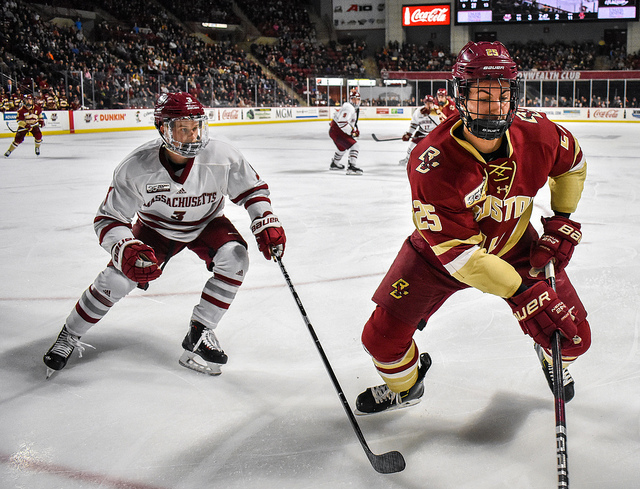 The Massachusetts hockey team battled through adversity Friday night at the Mullins Center and beat Boston College, 4-3, in the final seconds to pull out a crucial win and two Hockey East Association points.

After going down by two goals in the first period, No. 3 UMass scored three straight tallies to build a slim edge entering the third. Following David Cotton’s equalizer it for the Eagles (10-15-3, 9-6-3 Hockey East) late in the final frame, the Minutemen (22-6-0, 14-4-0 HEA) looked to the late-game heroics of Jake McLaughlin.

With the final seconds ticking off the clock and the puck skittering around the front of the BC net, the junior defenseman took a pass from Mitchell Chaffee and slammed it home with 2.3 seconds to play.

“We live by the motto ‘You get what you deserve,’” UMass coach Greg Carvel said. “Honestly, I was like ‘We deserve to score a goal here’. The puck had been banging around at the front of the net a lot and the guy who deserved to score was Jake McLaughlin. I’ve challenged him in the last two weeks and he’s really elevated [his game]. I thought he was outstanding tonight — I thought he was our best player”.

“Leading up to this point, I haven’t really gotten the bounces I wanted, so it was nice to get that one,” McLaughlin said. “I didn’t really know how much time was on the clock, but it was a surreal feeling.”

The Minutemen set a program record with their 22nd win of the season and beat the Eagles for the first time since 2013. Chaffee and Cale Makar each notched three points in the first half of the weekend set.

“Our main thing is to just be able to keep chipping away,” Makar said after the defiant victory in front of 7,835 fans. “A few things didn’t go our way in the first period and we kind of just reset and refocused after that. We know that if we just keep chipping away, things will come. Fortunately, they did tonight.”

With Matt Murray (21 saves) making his 21st start in net, BC jumped on UMass right away in the first period. After Casey Fitzgerald started the scoring, Connor Moore added on and pushed it to 2-0 early.

Things began to shift for the Minutemen just 29 seconds later. As Chaffee raced down the ice on a two-on-one chance, he patiently waited for Makar to join him, and slid a pass over which the sophomore buried.

“I wanted to just contribute,” Makar said of the first goal. “I took a bad penalty before that and I just wanted to get on the ice and try and do something productive to get the energy back for the guys.”

Following Makar’s 10th of the season to pull within one entering the first intermission, John Leonard erased the deficit completely in the second on the power play when Makar made yet another big play.

As the sophomore slid the puck through the scrum in front of Eagles’ netminder Joseph Woll (26 saves), Leonard, in the right place at the right time, connected with the pass and evened the scoring at two.

Just over a minute later, Philip Lagunov notched his 8th goal of the season on a feed from Jacob Pritchard, who stole it from BC defenseman behind Woll, and UMass earned its first lead of the night.

It didn’t last long, however, as Cotton followed up his own rebound from Murray and tied it at 13:11. But as the Minutemen have shown several times this season, the game isn’t over until it’s over.

During an all-out puck battle in the front of Woll in the waning seconds, McLaughlin slid down from the blue line and took a pass from Chaffee, which he threw directly on the net and barely beat the buzzer.

But just as soon as the crowd at Mullins exploded in celebration and UMass earned its record-setting win in front of the home crowd, the Minutemen turn the page and ready to battle the Eagles again Saturday.

“At some point, it’ll be a special day, but we’ll quickly turn the page and get ready for tomorrow,” Carvel said of the record-setting win. “Believe me, my staff, myself, my players, we take a lot of pride in what we’re doing and the success we’re having. Our goal was to bring respectability to the program. We take a lot of pride in that record, but we have bigger goals. That’s a nice one to check off on the list for sure.”