Minutemen score three times in second and never looked back 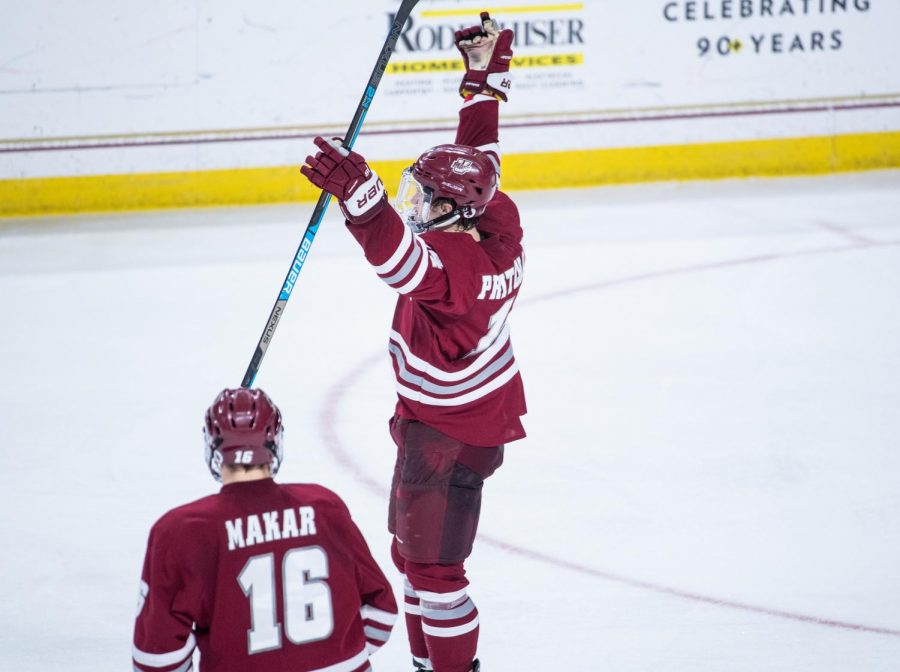 CHESTNUT HILL—Milestones are the new normal for the Massachusetts hockey team.

Graduate transfer Jacob Pritchard notched the game-winner with a snap shot from the right faceoff dot that surprised BC goalie Joseph Woll (27 saves) at 12:05 of the second period.

The goal marked Pritchard’s 14th goal of the season as well as his 100th career point.

The Eagles brought it back to a one-goal game with a Graham McPhee power play tally 1:51 later but the Minutemen held tough throughout the third before Jake Gaudet iced it with an empty-net goal at 19:40.

“I thought tonight was an excellent road game,” UMass coach Greg Carvel said. “We executed our game plan, all the guys played well without the puck and we find ways to score goals. We have some gifted offensive players, but I really liked the way we played defensively.”

The Minutemen fell behind 1-0 in the first period when McPhee wristed a shot past Matt Murray (23 saves) just inside the far faceoff dot.

It wasn’t until the start of the second that UMass got on the board. John Leonard scored the equalizer after he unleashed a furious shot from the slot 42 seconds into the frame with the Minutemen on the power play.

UMass doubled its advantage 1:08 later on another man-advantage marker, this one courtesy of Oliver Chau. A BC defender fumbled the puck around the crease and a Chau stick-lift, followed by a spin-o-rama resulted in a top-shelf goal for the sophomore winger.

“I think it’s just once we get that first one, I think we just rally from it and use that momentum,” Leonard said. “Chau made a great play in the slot there and he got a quick shot off and we just went from there and kept going.”

Pritchard’s goal came through the middle portion of the period to give the Minutemen a 3-1 lead.

The Eagles appeared to have tied it in the third period when a bouncing puck eluded Murray and was on it’s way into the net, however an active stick from Jake McLaughlin swiped the puck away before it completely crossed the goal line.

BC also found itself on a 5-on-3 in the last 20 minutes but a tenacious UMass penalty kill prevented the Eagles from knotting it up.

The Minutemen’s effort on that PK was a reflection of the entire defensive performance against BC.

“I just liked the way the whole game, the guys were committed to being above the puck and being really heavy and making [BC] go through our bodies to get into the offensive zone,” Carvel said. “We played a good, heavy game.”

Gaudet and Leonard each finished with a goal and assist to lead UMass.

“I’m very proud of my team tonight,” Carvel said. “I think everybody was waiting for us to get to this part of our schedule. We swept BU a couple weekends ago and now to sweep BC, it’s quite a statement for our program.”