Voting to begin on Tuesday, Feb. 19 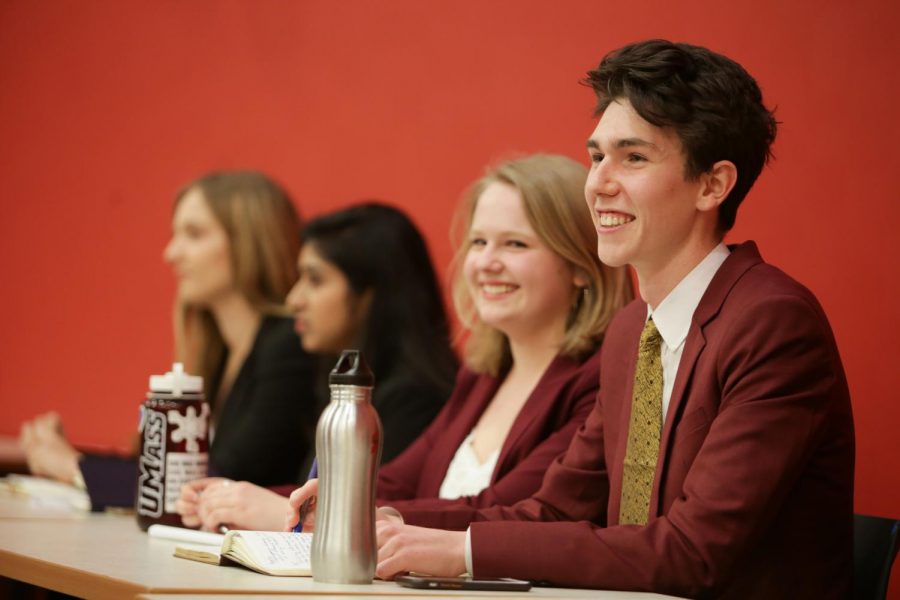 The debate was hosted by The Massachusetts Daily Collegian and was moderated by Michael Connors, an assistant news editor for The Collegian. Candidates for president and vice president respectively were incumbent Timmy Sullivan and Hayden Latimer-Ireland, Allie McCandless and Moksha Padmaraju, and Stephanie Margolis and Colleen Coakley. Coakley was not present for the event. Additionally, Jake Binnall was running uncontested for student trustee.

Connors began the debate by asking what would be the top priority of each candidate if elected. McCandless, the first to answer, responded with the dealing of current Student Union renovations. Students voted in favor of a referendum in the 2018 Spring semester, which allotted $25 million to be used to renovate the Student Union, a price that was added on to $25 million from the University and came from an increase in student fees.

McCandless was also critical of Sullivan, claiming that Sullivan had promised to displace the costs of the projects so that students would not have to pay anything for the project, and had not delivered on that promise.

In response, Sullivan said that the $12 million increase was not a part of the initial $25 million students voted for in the referendum.

Sullivan said, “I have never once permitted an increase in direct payments from students’ pockets.”

McCandless and Sullivan continued their criticisms of each other in their closing remarks.

“The reason Moksha and I are running for these positions is because in the past year, the SGA has not created real, positive change in the lives of students. We have seen a record number of students not satisfied in their leadership,” McCandless said. “Every year people campaign on fixing the SGA, and every year, it doesn’t happen.”

In response, Sullivan said that “there was a lot wrong” with McCandless’ criticisms and said that McCandless had never asked him a “single question” on the Student Union project, to which McCandless responded with “wrong.”

Sullivan added, “If you think you can walk in and clean up shop, you’re mistaken because we’ve already entered into a contract, and unless you want to violate Massachusetts labor laws and not pay people for their labor, you will not be able to decrease the costs.”

Later in the debate, in response to a question on how the candidates will handle incidents of racism on campus, Margolis said, “We can’t necessarily rely on the University to make a fix for us. We can’t go to them and ask them to fix it for us because they haven’t, and it’s not a new issue, it’s an issue that has been around for a really long time.”

Margolis added that she felt the solution to such incidents is communicating with students.

In her own response to the question, Padmaraju called for an increase in listening to students of color, which included in diversity of SGA.

“We can’t help the entire student body if you don’t hear all of the voices,” she said.

Padmaraju also said that the emails sent out by the University following incidents of racism and hate in campus were “a step in the right direction” but not enough to solve these issues. She then called for an increase in communication with the administration.

She said, “I think we definitely need to do more, and work with [the University] and work with people involved because it’s hard to know the whole story when you don’t talk to everyone.”

In a later question to Binnall on how he plans to effectively communicate the interests of the student body to the Board of Trustees, Binnall said that he plans to work individually with the board and other student trustees. Additionally, he noted that he would “call people out” if he had to.

During the portion where questions were taken from social media, in a question from Facebook Live, one person asked how the candidates will address the issues faced by registered student organizations who were forced to move due to the Student Union renovations. In response, Latimer-Ireland noted that she would still be a student when the project is completed in Fall 2020.

She said, “I think having strong continual leadership through that process is going to be very helpful for all of the RSOs involved.”

Jon Blum, a sophomore economics major and a supporter of Sullivan and Latimer-Ireland, had a positive reaction to the debate.

Students can vote through Campus Pulse beginning on Tuesday Feb. 19 and continuing through Feb 21.