The Buckeyes outscored UMass 4-0 in the third 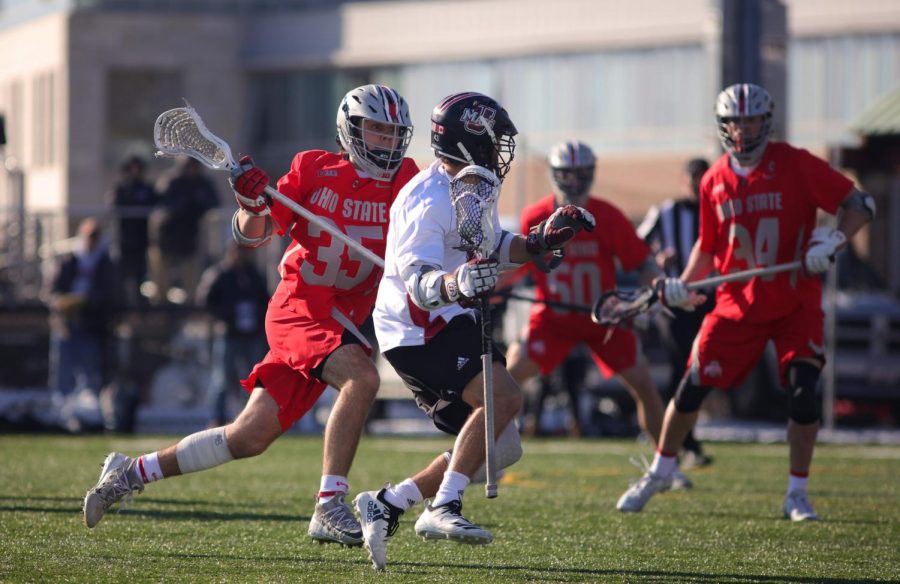 The Massachusetts men’s lacrosse team dropped its second game in as many contests so far this season on Saturday, falling to No. 13 Ohio State 11-7 at Garber Field.

UMass played well throughout the entirety of the game and were tied with Ohio State at the start of the second half, but the Buckeyes rattled off 4 unanswered goals in the third quarter and shutout UMass offensively in the same frame. The Minutemen had their chances and were able to get off 11 shots in the quarter, but their inability to score is what ultimately cost them.

The first half had nonstop action on both ends of the field and saw each team pushing the pace offensively. Ohio State scored a quick two goals in the first three minutes of the contest to take an early advantage. UMass was then able to settle down and get a pair of goals from attackman Gabriel Procyk in the first and entered the second quarter trailing just 3-2.

The Minutemen then tied it up early in the second with a Scott Del Zotto goal after a nice feed from junior Jeff Trainor. The Buckeyes then ripped off two straight goals to bring the contest to 5-3. However, goals from Trainor and Procyk tied the score at five with less than four minutes remaining. The two teams then traded goals and entered halftime tied at 6 apiece.

After struggling last week against Army, goalie Sean Sconone had 20 saves which tied the senior’s career-high for a single game.

“Hopefully, it’s a confidence builder for him,” said head coach Greg Cannella. “Typically when your goalie makes 20 saves you win the game, but [Ohio State’s] goalie made 17 and they won. So, I’m disappointed that that effort from Sean doesn’t really show up cause we didn’t come out on top.”

Meanwhile, freshman Gabriel Procyk continued his strong start for the Minutemen, posting another hat trick and bringing his goal total to a team-high seven. It now appears that UMass has two of the top attackman in the CAA with Procyk and sophomore Chris Connolly, who had a pair of assists Saturday. The duo also played together in high school for year while at Trinity-Pawling.

“I think they just feel comfortable with each other,” said Cannella. “Chris has done a good job of being able to feed the ball, whereas last year he was more of a scorer and above the cage guy. This year he’s behind the cage and feeding the ball and Gabe’s a great finisher, he caught a couple right inside and put them in the back of the net.”

“Gabe’s awesome,” said goalie Sean Sconone. “He shoots on me everyday in practice so I know what he’s capable of, he scores the ball all the time in practice. He’s got Chris [Connolly] down there and Devin Spencer helping him out, leading him a little bit, and Gabe’s gonna step up to a leadership role soon.”

UMass will now be embarking on a four game road trip and won’t have a game on their home turf until March 12th. Their first game on the trip will be next Saturday when the Minutemen travel to Cambridge to battle unranked Harvard. The Crimson are 0-1 on the year after losing their season opener to North Carolina.