UMass outscored 38-14 in first half 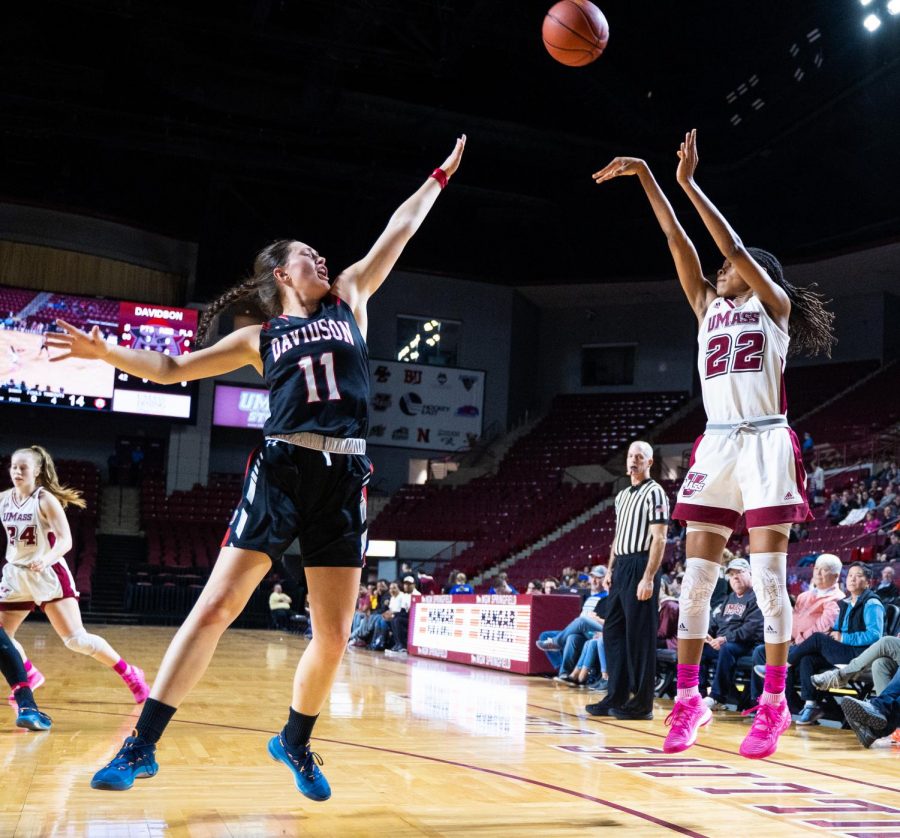 The Minutewomen (13-13, 5-7 Atlantic 10) failed to gather any real momentum throughout the entire game as the Wildcats (15-10, 9-3 A-10) shut them down. UMass showed some signs of life early in the second half, but ultimately couldn’t overcome the deficit.

“We got outworked for 40 minutes,” said UMass coach Tory Verdi. “We got outplayed for 40 minutes. You’ve got a team that came in here and they wanted it more than us. That was disappointing because we’re both playing for something and Davidson did exactly what we did to them when we went down to their place.”

UMass started the game on a horrendous pace, only scoring five points in the first quarter. The deficit would only get worse in the second quarter, as the Minutewomen allowed 24 points while only scoring nine points themselves.

The second half was a different story for UMass. The Minutewomen started out on fire and hit a multitude of shots that brought them back within a shot at winning the game, but a return to the sluggish play that plagued them in the first half killed any momentum they may have garnered.

The Wildcats were locked in offensively after a sluggish first quarter, bombarding shots from the outside all game. Davidson was led by sophomore guard Katie Turner, who led all scorers with 17 points, and also received major contributions from senior guard Kianna Speight, who scored 16 points and fired from the perimeter in the second quarter.

Davidson also outrebounded UMass 43-28. The Wildcats grabbed 31 defensive rebounds and absolutely dominated the Minutewomen with their hustle. They also played stout defense throughout the game, holding the Minutewomen to just 32 percent shooting from the field and prevented them from getting into any sort of consistent offensive sets.

“We took ill-advised shots,” stated Verdi. “We took bad shots. We took off-balanced shots, we took rushed shots, and we didn’t work the offense. We didn’t break them down and we didn’t make them have to defend.”

On a lighter note, Saturday’s contest was Senior Day for the Minutewomen. The team held a pregame ceremony to honor seniors Jessica George, Genesis Rivera, Mackenzie Sullivan, and team managers Yvonne Chen and Annie Zampitella. The players each got some game time as well, as Jessica George played 37 minutes and tied for the team lead in scoring with 11 points. Genesis Rivera played 14 minutes and scored 3 points while providing some decent defense. In a great moment in the waning minutes of the game, Mackenzie Sullivan checked in to a roar of applause from the crowd.

The Minutewomen will return to the Mullins Center on Wednesday when they face George Washington at 7 p.m.

Javier Melo can be reached at [email protected] and followed on Twitter at JMeloSports.