Students and alumni fight for the future of Hampshire College 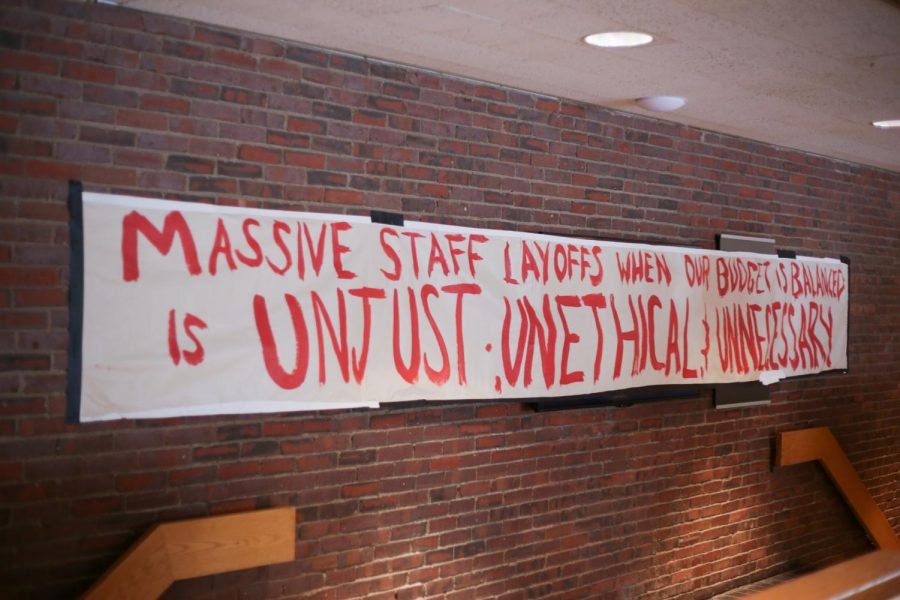 On Friday, Feb. 15, student activists at Hampshire College entered their 15th straight day of non-stop occupation of the office of the school’s president, Miriam “Mim” Nelson.

With makeshift sleeping arrangements strewn across Nelson’s place of work in the Cole Science Center, students in the “Hampshire Rise Up Coalition” have been taking shifts — making sure that at least a handful of protestors take up space at all times.

The peaceful demonstration began on Jan. 31 in response to a letter sent from Nelson to students weeks earlier, detailing the school’s plans to seek a “strategic partnership” as it faced an uncertain financial future. On Feb. 1, the school’s Board of Trustees announced their intention to admit only 77 freshman in the fall, and layoffs of staff members are expected to begin on Feb. 19.

For many students and alumni, the administration’s decisions were unexpected. Along with the sit-in, an alumni-led group focused on starting a conversation around the situation called “Save Hampshire” began to organize.

“Community is a revolution,” said Whealon Costello, a student at Hampshire College who has been taking part in the sit-in since it started. Dissolving non-disclosure agreements for transparency in administrative affairs, electing student trustees and equitable decision-making are reasonable demands, she explained.

“The reason I’ve wanted to be in the sit-ins is to do everything I can to support through the process of people sharing and hearing each other’s needs on this campus,” Costello said. “If change is going to happen, and people are going to use their powers, whatever they may be to effect change, they’re doing it together.”

Originally in both the Dean of Students Office and the Cole Science Center, the sit-ins had consolidated to just Nelson’s office in the Cole Science Center following Hampshire College’s decision to adhere to one of their demands, the dissolution of NDAs. The college also announced a plan toward shared governance by promising to build an oversight committee made from a student, faculty and staff.

In response to the compromise, Hampshire College Rise Up released a statement on their Facebook page including the sentence “You are not doing enough.”

“To get us out of the president’s office, you will not only have to make promises, but visible, public and tangible actions to push toward the Hampshire Shared Governance model we wrote about,” the statement adds.

Marlon Becerra, a student at Hampshire College in the class of 2019 studying economics and pre-law, said that constant pressure on administration to open a conversation with students had proven to be effective.

“We are in dialogue with them consistently,” Becerra said. “Hopefully they will meet those requests.”

Hampshire College provides an alternative and unique space for students to learn and grow as people, Costello said. When that space’s future is put into question, it’s the community’s obligation to stand up together, she said.

“The potential that this place has as far as the kinds of people who are here, the kinds of experiences they have had…” Costello said. “People come here knowing things, having dealt with things…people have incredible projects, problems they want to solve.”

Costello has seen firsthand the amount of stress the past month has placed on students. Even she’s felt the burnout of constantly keeping a space occupied, but for her, the experience has been rewarding.

“I feel like that the ways the community has had of communicating and organizing have gotten better and more developed even as more people have gotten more tired,” Costello said. “And that’s really, really exciting to me.”

Students at Hampshire College aren’t alone. Just down the hall from the demonstration in the Cole Science Center was a white fold-out table filled with food for protesters that was donated by alumni.

And even as the sit-in continued its work on Feb. 15, the same day a teach-in organized by “Save Hampshire” drew around 50 people to Franklin Patterson Hall across the quad.

Centered around upcoming staff layoffs, the event was focused on both explaining the school’s financial status and coming up with ways to adapt to a changing university landscape.

Hampshire College has always been a small school, said Suzanne Perkins, an alum of the school and the head of research at “Save Hampshire.” Hampshire College had 1,191 students in 2018, which is down from a high in enrollment in 2014, according to Perkins.

But pointing to just the decline is deceitful, she explained.

“We’ve had a much lower population prior to this. So we’ve had a big bump there and we understand enrollment is a serious issue and that every kid who comes here brings with them some dollars,” Perkins said. “But at the same time, it is a little dishonest just to show the decline.”

Even the college’s $52 million endowment is at a more than reasonable level for a school of its size, Perkins said.

“We have the biggest endowment we have ever had,” Perkins said. “It’s a very strong endowment for a school that is less than 50 years old.”

Set on saving the college and admitting a full fall 2019 freshman class, Perkins pointed to efforts started by Hampshire alum Steve Aronstein that raised $250,000 earlier this month through crowdfunding.

“The claims that there is no money available is disingenuous,” Aronstein said. “It’s our opinion that we can raise what needs to be raised.”

Alumni would need to raise around $10 million to keep the school open for another year, Aronstein said, adding that a non-profit is being organized to help facilitate raising money.

“The goal is to raise that over the next few months, and we’re confident it can happen,” Aronstein said.

Alumni at the event reiterated at the teach-in that they would do anything that needed to be done to help save the school.

“Hampshire is still a fairly young experiment,” Joanna Lawless, an alum of Hampshire from 1995, said. “And I still want to prove the experiment positive. I want to say that there is a place for a sustainable alternative education.”

Batya Sobel, who also graduated from Hampshire in 1995, said that she believed Hampshire College already had a partnership with the rest of the Five College Consortium. But while admitting she did not have all of the facts the Board of Trustees do, Sobel insisted that a private merger between the school and another company is not what is needed.

“I would like the five colleges to step up, we’ve already been in a partnership, that’s who started us,” Sobel said referring to the “New College Plan” of 1958 that created Hampshire from the other four schools in the Pioneer Valley. “We just want the faculty, staff and students to maintain the Hampshire education. And I think there’s a lot of paths forward. They do not include some private merger with Starbucks. F*** that.”

Though President Mariam “Mim” Nelson’s office or representatives from the Board of Trustees were not present at the teach-in, the demonstration did prompt a response from both administrative bodies the next Monday.

Though Nelson did reiterate the need for staff layoffs and “short-term downsizing” of Hampshire College, she did address the future of the school’s autonomy.

“We are also pursuing an approach where Hampshire maintains independence by means of transformative financial support from our community of alums and other long-engaged donors,” Nelson said in an email to the Hampshire College community.

At the teach-in, Hampshire College director of media relations John Courtmanche confirmed that faculty would not receive a pink slip on Tuesday, but staff members could be at risk.

On Tuesday, Feb. 19, an letter was sent out to the Hampshire community from Nelson stating that, effective April 19, 2019, nine staff members in the admissions and advancement offices were notified that they were laid off.

“I share this news with a heavy heart and immense gratitude,” Nelson said in the statement. “We are losing valued colleagues and friends whose thoughtfulness and dedicate  have had measurable, and immeasurable, impact on our students, families, alums, and the campus community.”

In a separate statement, the Board of Trustees reaffirmed their commitment to Nelson’s leadership, stating “We greatly respect and appreciate her integrity, knowledge, skill and fortitude as together we work to forge the future for this extraordinary institution we all cherish.”

Courtmanche explained that the school understood why students would be worried about the value of their degree and the fate of their school.

“If we had accepted a full class without the confidence that we have the finances to graduate them in four years, that could risk our accreditation,” Courtmanche said.

Editor’s Note: This article has been updated to include information on staff layoffs as of Feb. 19.