Three-goal second period lifts No. 2 UMass over BU in 4-2 victory

First sweep of the Terriers in UMass history 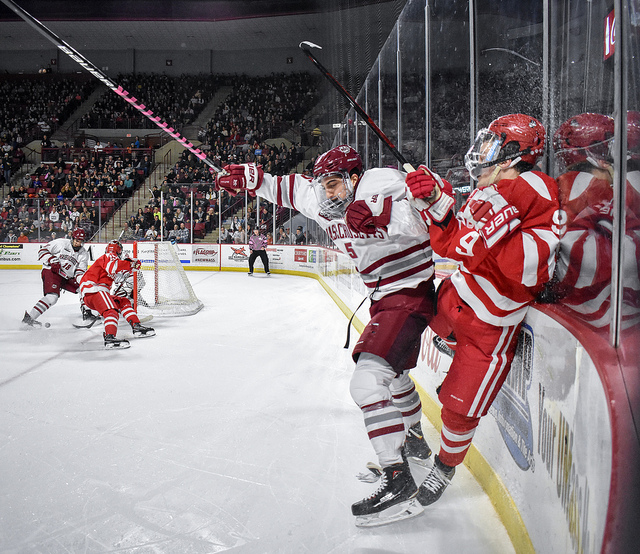 After entering the second period trailing by a goal Friday night, the Massachusetts hockey team turned on the jets and notched four straight tallies to down Boston University, 4-2, at the Mullins Center.

In a rematch of last Friday’s 7-5 barn burner in Boston, No. 2 UMass outwilled the Terriers (10-13-3, 8-7-2 Hockey East Association) on a trio of goals in the middle frame and completed the season sweep.

It is the first time the Minutemen (21-5-0, 13-3-0 HEA) have swept the Boston powerhouse in program history. UMass also tied its program record for the most wins during a season, dating back to 2006-07.

“The game last Friday, obviously it’s tough to win on the road and we found a way to win, but giving up five goals was not good,” Minutemen coach Greg Carvel said Friday. “So, our focus this week was playing better defensively and trying to limit BU’s offense, and I thought we did a very good job of that tonight.”

John Leonard and Marc Del Gaizo each scored their 10th goals of the season in the Hockey East victory, while bottom-six forward Jack Suter and defenseman Jake McLaughlin potted their first of the season.

“Real happy with the way we played,” Carvel added. “It was great to get goals from two guys that didn’t have a goal this year. I liked our compete. Just another win. Very happy and very excited to move on.”

It took the Terriers less than seven minutes to jump on the board in the first period. After UMass was whistled for too many men on the ice, Dante Fabbro blasted a one-timer on net to make it 1-0 early.

At the start of the second, the Minutemen came out of the dressing room and could not hold onto the puck. With the chance of going down by even more in front of a sold-out Mullins, Carvel called a timeout.

Just seconds after the unorthodox break, UMass came alive and did not turn back. Spurred by a precise, timely pass from forward Jacob Pritchard, Leonard let it go from deep in the slot and evened it at one.

“Let’s put the pedal down here and play faster up and down the ice,” Carvel said of his message during the turning-point timeout. “Because when we try to play fast and play hard, we’re a good hockey team.”

Less than two minutes later, Suter gave the Minutemen a lead they would not surrender for the rest of the game. In the aftermath of an explosive, end-to-end rush from defenseman Cale Makar, who started behind one net and made it all the way to the other, Suter took Makar’s pass and banged it home.

“Just being able to get that first one past gave us a lot of momentum,” Makar said after the record-tying victory. “We were fortunate that the second one went in, as well, and we kind of just rolled from there.”

Seven minutes after Suter’s first of the season, McLaughlin followed suite and gave UMass breathing room entering the third. On a cross-ice pass from above the faceoff circle, Brett Boeing connected with Suter, who sent a shot on Jake Oettinger (35 saves), which McLaughlin swiftly cleaned up and buried.

Marc Del Gaizo notched his sixth power-play goal of the season midway through the third to make it 4-1 and Shane Bowers beat Filip Lindberg (25 saves) in the final 60 seconds, but the battle was already over.

With only eight regular season games remaining, Carvel couldn’t help but reflect on the team’s success.

“It’s awesome,” he said as the Minutemen swept the Terriers for the first time ever. “Our goal this year was to bring respect to this program, in the league and nationally, and we’ve done a lot of things that haven’t happened in a long time. It’s a special group. To sweep BU is a big statement for this program.”

UMass is back in action Saturday night when it travels to No. 15 UMass Lowell for a 7 p.m. showdown.