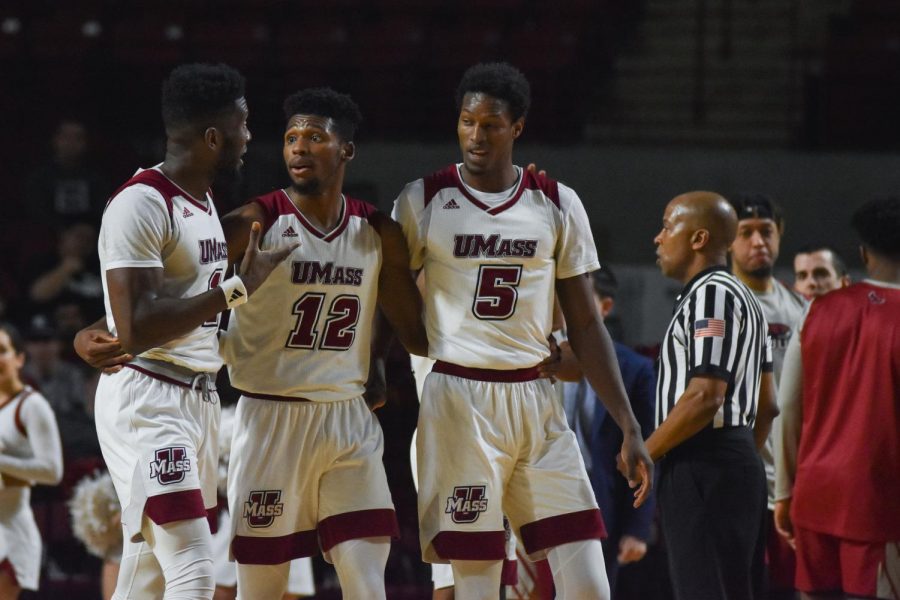 It wasn’t that long ago that the following statement would sound a bit far-fetched, but here we are: Carl Pierre is the most important member of the University of Massachusetts basketball team.

I say “a bit” far-fetched because of course everyone knew he was good and he was definitely important, but when you’ve got an A-10 preseason All-Conference First Teamer like Luwane Pipkins, there’s a mountain to climb to take that mantle.

Pierre’s 21 points — second only to Jonathan Laurent’s 24 — led UMass to a crucial comeback win over Saint Joseph’s, as the sophomore put up 19 points in the second half and hit a couple huge shots down the stretch to close the show for the Minutemen.

Pierre’s started to make that jump from a spot-up shooter and secondary scorer to someone comfortable demanding the ball, as he does in this clip: Keon Clergeot tries to wave him into the corner but Pierre comes and grabs the ball to initiate the offense late in the second half.

With the Minutemen down by four with 20 seconds to play, Pierre came out to the top of the key and took it from Clergeot. A year ago, I think he would’ve hesitated. On Saturday he caught it, set and fired the Minutemen back within a point.

There were some concerns about Pierre’s shooting early in the season, and rightfully so: he struggled for quite a while to find his rhythm, and up until he single-handedly dragged the Minutemen back from the brink of a blowout against Providence in December, he wasn’t stellar.

But something has changed over the last few games. Through the first three months of the season, Pierre was taking between five and six threes per game and hit at a 40.5 percent clip in November, 37 percent in December, and then saw a bit of a dip to 34.7 percent in January (though his numbers going to the basket improved in January, as did his overall scoring output).

Suddenly, through six games in February, Pierre’s taking just over eight 3-pointers a night and hitting four per game, a 48 percent clip from deep. The percentage bump could be anything, but the output bump is confidence.

Pierre’s been forced to take on a much bigger scoring load with Pipkins in and out of the lineup, and if you look at those monthly splits again, he’s succeeded — 11.3 points per game in November, 8.6 in December, 9.9 in January and a huge jump to 17.7 in February.

His scoring output in February has just about doubled his average over the previous two months. As a result, a UMass team that lost its first six games of conference play is 3-5 in its last eight — not exactly stellar, but a real improvement, considering Pipkins only played in one of the three victories, a forgettable 2-for-14 performance from the field against Rhode Island, as Pierre went 6-for-9 from deep and scored 22 to lead UMass to its first A-10 win of the season.

And to tell you the truth, I’m not even sure his shooting is his most important contribution to this team. Having started conference play 0-6, the Minutemen were in desperate need of leadership, and Pierre has consistently stepped up. He pulls huddles together, he pulls aside struggling teammates — he even pulled Matt McCall back toward the bench after his coach earned a technical on Saturday for blasting the refs midway through the first half.

I thought this McCall quote was telling: “Carl Pierre is grown. He’s grown. He cares, and I’ve said this a thousand times in the press conference, he embodies everything we want this program to be about, on and off the floor. His work ethic, his competitiveness, his appreciation for being here.

“Our four core values, team, passion, toughness, discipline, he’s got them all. And he brings it every day.”

I’m usually never one to start preaching the importance of “intangibles” because you never really know what’s going on in the locker room or within the program, but it’s pretty clear Pierre has taken a vocal role on this team, and with the leadership vacuum that C.J. Anderson left behind, it was sorely needed.

I want to be very clear that none of this is a shot at Pipkins — on his best day, Pipkins is by far the best player on this team, and can go shot for shot with any player in the A-10. There’s a good reason he was in the discussion for a potential A-10 Player of the Year run in October; but every time the Minutemen have needed a lift, it’s been Pierre who’s provided it, and he very well may be the only reason this team isn’t winless in A-10 play.

We’ve seen this team find a way to win without Luwane Pipkins or Jonathan Laurent, we’ve seen them do it without Rashaan Holloway and without Keon Clergeot (or at least with a limited Clergeot). But without Pierre, I don’t think this team can be successful.

Tuesday’s matchup with Dayton is a chance for the Minutemen to make a statement against one of the A-10’s elite teams, having gone down to the wire the last three times they’ve met the Flyers — Dayton hasn’t won a regular-season game at Mullins since 2004, and McCall would very much like to see that streak continue.

And if there’s any chance of that happening, I’d be very surprised if Pierre weren’t center stage, leading the way.