Track and field has another strong showing at New England Championships

UMass continues their march toward the Atlantic 10 championships 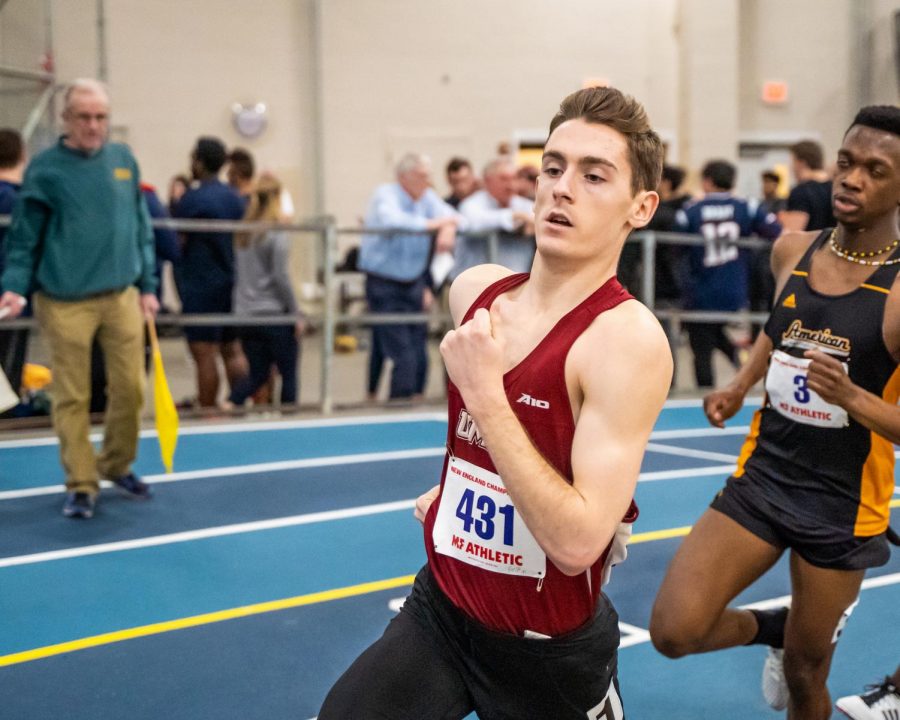 The Massachusetts men’s and women’s track and field teams didn’t disappoint in their first championship meet this past weekend. Each squad sent their best athletes who qualified for the New England Championships to the Reggie Lewis Center, in Boston, to compete against the other top competitors in the New England region.

The men’s team placed 10th out of 27 teams with 18 points and improved on their 16th-place finish from last year’s meet. Meanwhile the women’s team finished sixth for the second-straight year, but earned five more points this year with 53.5.

University of Connecticut’s men’s team won their 24th New England title, while the Northeastern women continued their run of dominance at the New England championships with their sixth-straight title.

On Friday, the Minutemen tallied six points in five scored events and were entrenched at 11th place overall by the day’s end. UMass’ distance medley team were the top scorers with a finishing time of 10:07.69 for sixth place.

Evan Burton earned seventh in the weight throw after a heave of 57 feet, .25 inches, while junior Mason Lord rounded out the men’s teams scoring on the first day after placing eighth in the pole vault.

The next day, the 4×800 team of Kyle Guzman, Nicholas Santos, Zachary Frahlich and Brian Gendron led the way for the Minutemen as they finished in second place in the event with a 7:39.49 mark. The 4×400 team also came up big with a time of 3:22.35 in an eighth-place effort, which bumped the Minutemen into 10th-place overall.

“We wanted to put together some relays where they could work harder together as a group and not just focus on individual-best performances,” said coach David Jackson. “As we get into championship season, we want to learn how to perform well as a group and score points for the group. So, the relay teams doing well was a learning lesson for the guys and how we can start to put that together more.”

Seniors Michael Famiglietti and Nathan Adeyemi earned points for their individual efforts on the second day of action. Famiglietti ran a personal best 4:16.74 in the mile for eighth place, while Adeyemi leaped 47 feet, 1.50 inches in the triple jump for seventh.

UMass’ women’s team had an even better showing, earning five medals over the two days of competition.

Star runner Emilie Cowan, who was the most recent A-10 track performer of the week, stole the show, again, earning the Minutewomen’s sole gold medal with a winning time of 1:12.21 in the 500 meter.

Junior Jada Harris also had a big weekend after taking home a pair of bronze medals. The first came on Friday when Harris cleared 5 feet, 5.25 inches in high jump, while she earned her second the next day when she finished the 60-meter hurdles in 8.53 seconds. Fellow junior Samantha Thompson also collected points in the high jump after earning sixth-place.

The final two medals came from sophomores Bryanna Rivers, who earned silver after running 2:14.07 in the 800, and Kira Kopec who posted 3,507 points in the pentathlon en route to a bronze medal.

Other scorers included Danielle Reicherts and Lindsay Witt who earned sixth and eigth in the 60-meter dash.

Colette O’Leary picked up eighth in the 1000 meter and Danielle Notarfrancesco threw for fifth place in shotput. The 4×400 and distance medley relay teams finished off the scoring for the Minutewomen with sixth and seventh-place finishes, respectively.

This weekend, each team will split their squads between the David Hemery Valentine Invitational, in Boston, and the URI Coaches Tribute meet. Oval sprinters, mid-distance and distance athletes are expected to travel to the Valentine invitational, while straightaway sprinters, hurdlers and all field events will be competing at Rhode Island.

The women’s team starts the action on Friday with the Valentine invitational, while the rest of their program and the men’s team will compete Saturday.

Sean Richardson can be reached by email at [email protected].