The freshman defenseman scored the game-winner on a breakaway goal 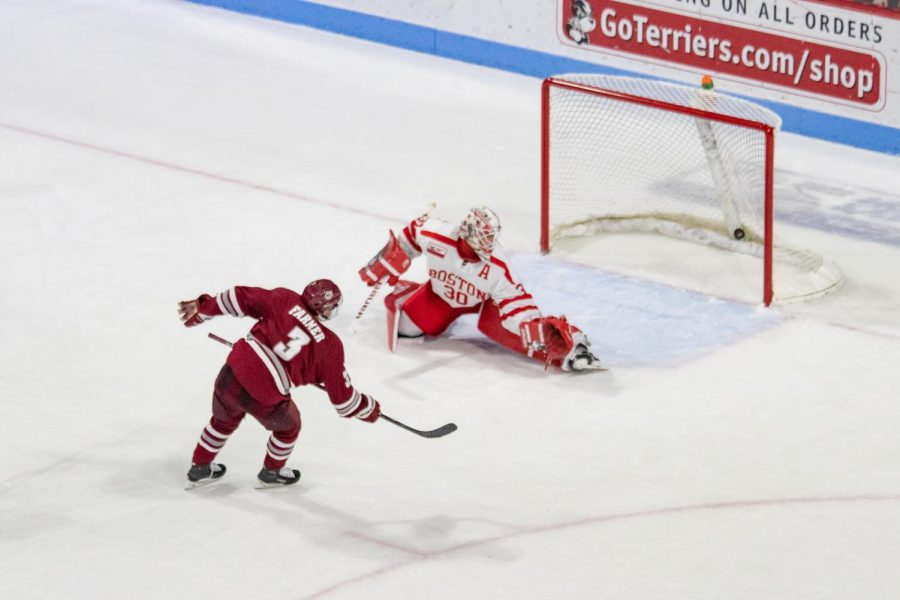 If you didn’t know who Ty Farmer was before, you sure do now.

The freshman defenseman scored two goals, including the game-winner, in the Massachusetts hockey team’s 7-5 win over Boston University Friday night at Agganis Arena.

With under two minutes left in regulation and the scoreboard reading 5-4 Minutemen, Farmer blew past everyone to a loose puck in the neutral zone and was off to the races. With just Terrier goaltender Jake Oettinger to beat, Farmer snapped a shot past the BU netminder’s glove to push the score to 6-4.

“He’s a very skilled offensive guy, you got to understand he isn’t the best defensive player and against good teams it gets exposed, but we recruited him for what he was able to do with the puck,” coach Greg Carvel said. “He’s an excellent offensive player. That was an unbelievable burst of speed there. When I saw him on the breakaway I was actually glad it was him and not one of our forwards. He’s pretty good at putting the puck in the net.”

“It kind of just popped up and I saw it was a good chance to go for it,” Farmer added. “Some will say it’s risky but I thought it was a great play, so I went for it.”

Farmer’s first tally came earlier in the third period on a Minutemen odd-man rush. Bobby Trivigno controlled the puck on the far side over the attacking blueline and whizzed a shot on goal that Oettinger stopped with his left pad. The rebound popped right out to Farmer, who was just outside the right post, and No. 3 guided the puck over the goal line to initiate the scoring.

Farmer’s game didn’t start so well, according to Carvel, but the blueliner recovered and ended up being the hero for UMass.

“Well I was hard on him the first half of the game because he was cheating the offense and on one of the goals in the d-zone faceoff I think was his responsibility, so he wasn’t an angel tonight but he comes out looking like one,” Carvel said.

The Minutemen ran into some penalty trouble late in the first and through the second period, including a 5-on-3 that BU capitalized on, but UMass bounced back, just as it did all game.

“Just stay positive – I was in the box for one of them so, I’ll own up to that,” Farmer said on the mindset of the team when it found itself in the box. “Just stay positive, have to stay out of the box and quit taking selfish penalties. If we took a few more it could’ve cost us the game and we’re lucky it didn’t.”

That positivity ultimately paid off with Farmer potting a pair in the final period to propel UMass to an impressive win past the Terriers.

“Ty Farmer, you get a defenseman scoring two goals in the third period on the road shows how good he is offensively,” Carvel said.