Civility in discussion was emphasized 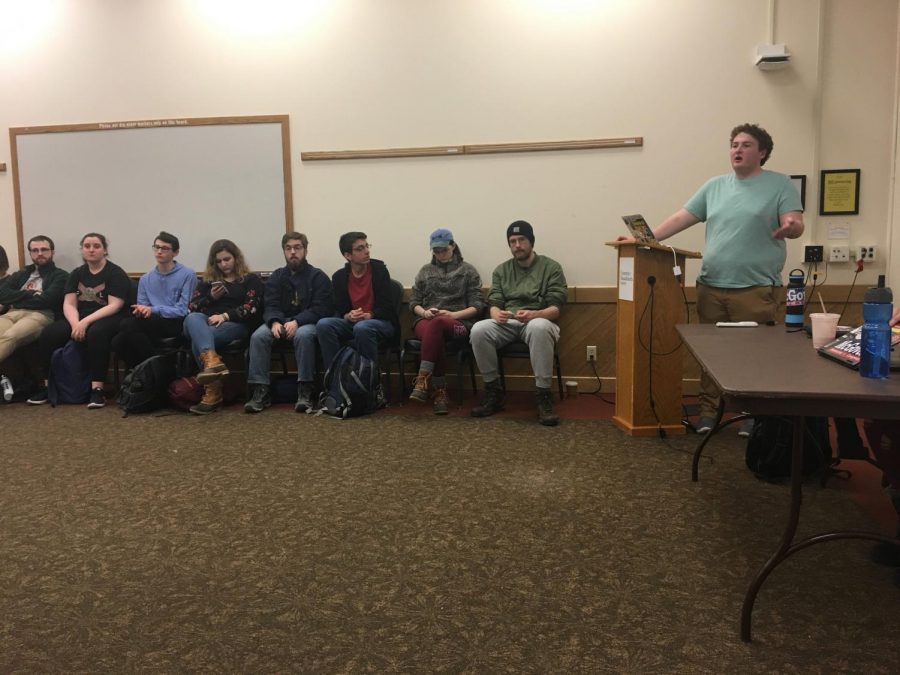 At the UMass Democrats’ event, “Discussion on Israel and its Role in Democratic Politics,” there was an air of anticipation in the room as students and campus community members filed in. The topic, with its potential for lively debate, brought roughly 30 people to a small room in the Campus Center basement on Wednesday night.

The event was sparked by a series of Israel-related incidents within the Democratic Party, notably Minnesota representative Ilhan Omar’s tweet last week that appeared to suggest that Jewish money influenced members of Congress, which many people called an anti-Semitic trope.

The discussion’s moderators, Tim Ennis and Carla Montilla, sat at a table facing the attendees, seated in a half-circle of chairs. To open the forum, Ennis gave a presentation on the history of Israel and the United States’ relationship with the country. As the presentation continued, Ennis and Montilla asked questions to the audience and moderated the ensuing debates.

“We want to keep it civil,” said Ennis, a sophomore political science major, before he opened the floor to discussion, referring to the likelihood that people would hold strong opinions about the topics being brought up.

Ennis brought up the “Boycott, Divestment and Sanctions” movement early in the event. The movement, which advocates for companies and organizations to remove their presence in Israel, is considered controversial and anti-Semitic by many people.

Jack Eccles, the president of the UMass Dems who was one of several main speakers during the debate, expressed his disapproval of BDS but affirmed that he believes it has a right to exist. This was in response to questions about a piece of congressional legislation that would allow states to punish companies that engage in the BDS movement.

Speaking in support of the legislation, which is part of S.1, the Senate’s first bill of its new session, was Andrew Abramson, a freshman economics major. Abramson drew a distinction between a company advocating for a cause and consumers doing so. He used the example of a bakery refusing to service a same-sex wedding, saying that it was wrong for companies to discriminate on who they sell to, but that consumers could decide who they buy from.

Also speaking against BDS was Assaf Elroy, an Israel Fellow at Hillel. Elroy, who is Israeli, lived in Israel for a significant amount of his life and served in the Israeli Defense Force, said that BDS causes Israel to step back from good-faith negotiations with its neighbors and harms the peace process. Though he said that boycotts are “totally alright,” Elroy called BDS problematic, saying that it is about “denying the right of the Jewish State to exist.”

When Ennis brought up Omar’s tweets, several people used the term “tone-deaf” as a description. But multiple people, including senior public health major Aron Unger, claimed that reaction to Omar’s comments would have been different if she were not Muslim.

Lucas Harrington, a political science major, agreed that the tweets were tone-deaf, but asserted that “they do this s*** all the time,” referring to Republican politicians posting similarly anti-Semitic tropes on social media. He cited a tweet by House Minority Leader Kevin McCarthy which claimed that three billionaires – all of whom are Jewish – were buying an election, as well as one by then-candidate Donald Trump which displayed Hillary Clinton next to a Star of David labeled “Most corrupt candidate ever” with money in the background.

Eccles also noted that there was a legitimate concern of anti-Semitism on the political left, citing prominent party members’ connections to Nation of Islam leader Louis Farrakhan, who has been widely condemned as anti-Semitic. He also described the “actual security threats” facing Israel, which he said the discussion had not covered in depth. There are “a lot of actual people in the world who want to wipe Israel out,” he said.

Toward the conclusion of the discussion, several people voiced more general beliefs about Israel’s situation. Kevin Casey, a senior political science major, made the claim that “the solution of Israel was the best we could do” at the time in light of the Holocaust and World War II.

“It’s hard to support some of their more dicey actions,” added Nina Donaldson, a sophomore political science major, saying that “it’s hard to be critical and not be called anti-Semitic.”

Wrapping up the meeting, Elroy said that he saw “a lot of nuance” in the discussion. “It’s important, what you’re doing right now,” he concluded.

Will Katcher can be reached at [email protected] and followed on Twitter @will_katcher.