UMass and Duquesne take opposite approaches on the offensive end 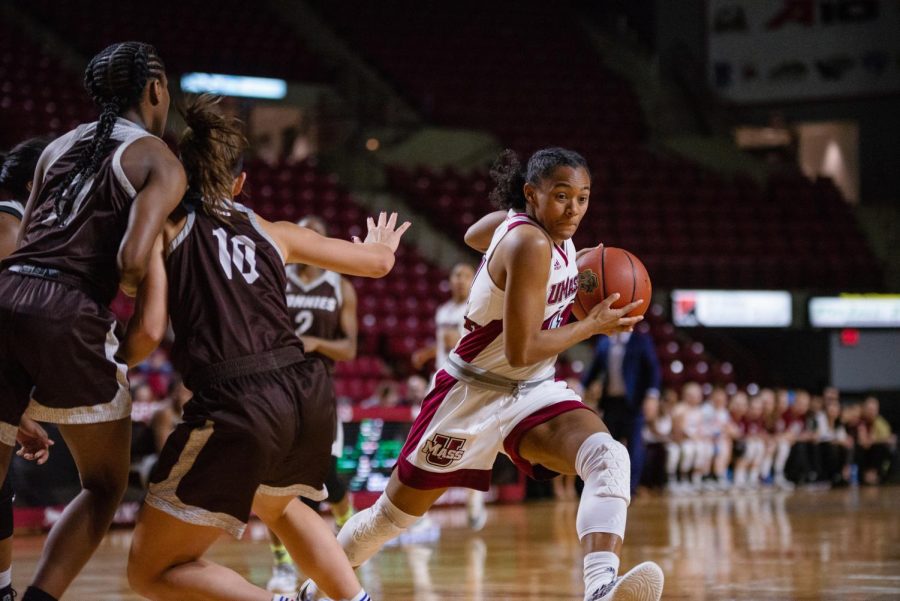 When the Massachusetts women’s basketball team faces off against Duquesne, it will be tasked with slowing a team that ranks fifth in the Atlantic 10 in scoring. However, UMass matches with a prolific offense of its own, sitting a notch above the Dukes at fourth in the conference.

“We need to be consistent in what we do,” Hailey Leidel said of slowing their offense down.

The Minutewomen rely on working the ball to get open shots that they then knock down at a high clip. 3-point shooting has been especially lethal for UMass this season as it leads the A-10, making threes 34.4 percent of the time.

“We need to make defensive rebounding our best offense,” coach Tory Verdi said. “Take the ball off the rim and then score on the other end.”

Duquesne, on the other hand, pushes the ball up-court, hoping to score a lot of points by taking a lot of shots. Because of this, the Dukes rely on getting out in transition by creating turnovers, which they do well, forcing 7.0 steals per game along with 4.3 blocks.

“We need to do a great job at taking all of their transition points away from them,” Verdi said. “They want to get out, they want to push, they want to attack, so if we can slow them down and make them play in the half court, we’ve done our job.”

Kadri-Ann Lass has been crucial to Duquesne’s ability to play fast. The senior is currently averaging 1.9 blocks a game, second-best in the conference.

On top of Lass, Libby Bazelak has been key to starting the Dukes’ high-paced attack, as her 1.7 steals per game rank fourth in the A-10.

Forcing turnovers allows Duquesne to maximize the number of possessions they have and make up for their poor efficiency shooting the basketball.

“They score the ball,” Verdi said. “They are a high-volume shooting team and they put points up on the board.”

“They can score it, and we need to do a great job defensively,” Verdi said. “We’re going to mix some things up and try to keep them guessing and keep them out of their comfort zone.”

One area where Duquesne is very efficient, however, is from the free-throw line. The Dukes have made 72.7 percent of those shots, good for second in the A-10. Taking most of their shots close to the rim also allows for more chances to draw contact and get the opportunity to take the shots they excel at.

Thursday’s game will feature two drastically different approaches on the offensive end of the floor, but if this season has been any indication, a high-scoring contest may be in store in Amherst.

“We know they push it in transition a lot,” Leidel said, “so that is going to be big key to the game we’re assuming.”

Tip-off is set for 7 p.m. Thursday at the Mullins Center.