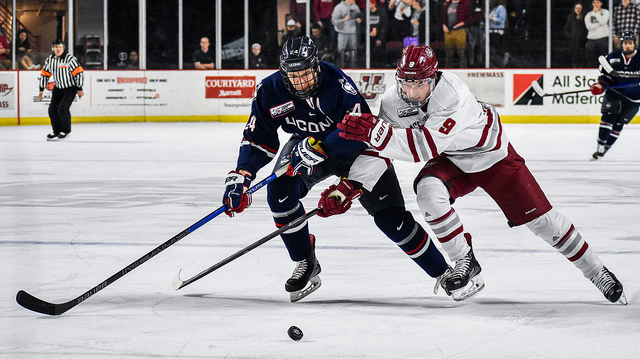 It was a record-setting night for Matt Murray and the No. 2 Massachusetts hockey team.

With a 3-0 win over UConn Thursday night in the Mullins Center, UMass (24-6-0, 16-4-0 Hockey East Association) collected its program-high 16th win over a Hockey East opponent this season. The victory tied the Minutemen’s record for home wins (14), as well.

“I consider that a real solid win for our group,” coach Greg Carvel said. “Our focus the last two weeks has been in defensive play. We had four or five shutouts last year, and we hadn’t had one this year.

“To me, it’s not overly surprising because of everything we ask of our guys to focus on, they’ve done a good job,” he added. “And I thought we played pretty well defensively tonight, didn’t give them a lot of speed up and down the ice.

The Minutemen managed to chip in a goal each period, finishing the night with 15 more shots than the Huskies (10-19-2, 5-14-2 HEA). They dominated most possessions, leaving Murray to face under 10 shots each period.

Two of the three UMass goals were collected while on the power play, as UConn put itself on the penalty kill four times through the first two periods. The Huskies only put up two shots on net with the man-advantage, failing to get anything going all night.

Murray tied the program record with his fifth shutout of his career, turning aside all 21 shots he faced throughout the night. Carvel said he challenged the sophomore netminder to get back to the mindset he was in during his undefeated streak in the first half of the season and he delivered.

Cale Makar got things going for the Minutemen a handful of minutes into the first, when he caught a partial breakaway that was ultimately spoiled by Huskie netminder Tomas Vomacka.

Roman Kinal was called for holding shortly after Makar’s chance, sending him right back to work.

The Alberta native kept with it and started the next shift with strong play in the corner, managing to carry the puck out of a scuffle and find John Leonard stationed by the right post to tap it home at the 10:58 mark.

Makar’s assist on Leonard’s 13th of the season tied the UMass record for total assists from a defenseman in a single season (25), which is currently held by former NHLer Thomas Poeck.

With 6:45 left in the middle frame, the Huskies nearly evened the score when Alexander Payusov ultimately shot wide while attempting to go glove side on Murray. But the Minutemen managed to add to their lead in the second off of Mario Ferraro’s first goal of the season.

Adam Karashik was called for interference, sending UConn on the penalty kill for the second time of the middle frame. Ferraro sent a hard wrister from the middle of the zone that blew past Vomacka to officially get the monkey off of his back.

“I definitely had the monkey on my back all year, but it was nice to get it in,” Ferraro said. “It was never something that was something on my mind with how successful we’ve been. Just got to keep rolling and we’re going to find some big success as long as we keep working hard.”

Marc Del Gaizo added an empty-netter in the third period to seal the win.

Carvel was particularly happy with UMass’ first-period performance, as they outshot UConn 18-4, and accumulated more shots on the power play (7) than the Huskies did all period. He commended the Minutemen for their ability to get pucks to the net and pull out a solid win.

UMass travels to Providence this upcoming Saturday to play a No. 10 ranked Friar squad.

Mollie Walker can be reached at [email protected] and followed on Twitter at @MollieeWalkerr.