UMass searching for first win on Saturday versus turnover-prone Harvard 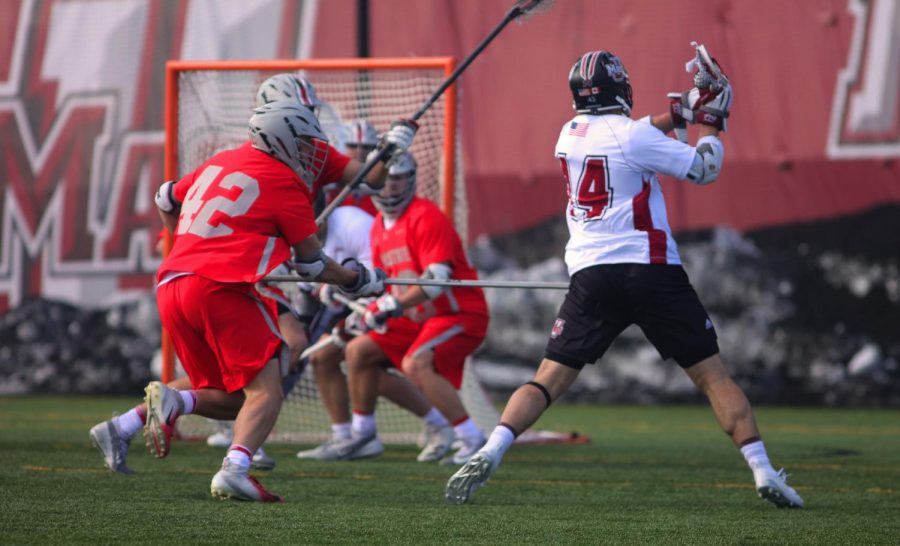 The Massachusetts men’s lacrosse team is about to face one of the more trying stretches of its season, playing four road games over the next three weeks. After losing their first two games at home, the Minutemen will look to build some momentum for the rest of their road stretch with a win over Harvard on Saturday.

In the first half of their most recent contest versus Ohio State, the Minutemen were able to generate fast breaks and transition opportunities, leading to quick-hitting goals. In the second, though, these opportunities were harder to come by and UMass struggled with its set offense, only scoring one goal in the second half after recording six in the first.

Fortunately for the Minutemen, Harvard is coming off a shaky outing versus North Carolina that saw the Crimson commit 24 turnovers — partially due to weather conditions — and let up 16 goals.

“I expect [the Minutemen] to, especially being at home, be more in control,” said Cannella. “But we want to be aggressive every game, every chance we can get to get the ball on the ground and get it up. We’re not a ten man ride team — we’re ready to do it — but not necessarily our forte. Something that we want to do, but we want to zone ride and try to turn the ball over.”

The Minutemen plan to be aggressive when riding Harvard, but at the same time want to play things the right way, the way they always do it.

“Harvard’s a good team,” defenseman Jackson Subach said. “They’re gonna have some skilled guys, and we can’t take that lightly. Especially in the clear game, we got to make things tough on them.”

Harvard’s goalkeeper, Kyle Mullin, is inexperienced. Prior to his first career start versus UNC last weekend, he saw just 1:09 minutes of action as a freshman.

Pressured by UNC’s 10 man ride (an aggressive defensive strategy which involves every player on the field engaging in one-on-one coverage), Mullin’s inexperience showed last Saturday in clearing situations. The sophomore made some questionable decisions, such as on this play when a UNC player intercepted his pass and took it back up the field to set up a goal.

Cannella believes Mullin is better than the UNC game might suggest, though he does take note of his inexperience. Regardless, Cannella isn’t so much preoccupied with Harvard’s goalkeeping as he is with putting the ball in the back of the net.

“We know he’s a good goalie but honestly, I don’t think it really matters about his experience,” said Procyk. “I think if we shoot the ball well it’s going to go in.”

Looking to the other end of the field, Harvard’s scoring is spearheaded by attack Ryan Graff who scored five of the Crimson’s 11 goals versus the Tar Heels. At 6-foot-4, 190 pounds, the junior is big and skilled. He uses his body well when driving to the net, as he does on this play, finishing his shooting motion despite being whacked from behind by a UNC defenseman.

“Graff uses his body really well to score it, to feed it,” said Cannella. “The other guys are — #33 [Austin] Madronic is a finisher, a great finisher, but he also had three assists the other day in transition. And [Kyle] Anderson is a playmaker in general, so we have to play well against all those guys. It’s a strong group. They scored 11 goals [against UNC], nine of them were from their attack.”

Face off is set for 1 p.m. at Jordan Field in Cambridge, Mass.