With a major target on its back, UMass softball is motivated to win it all in 2019 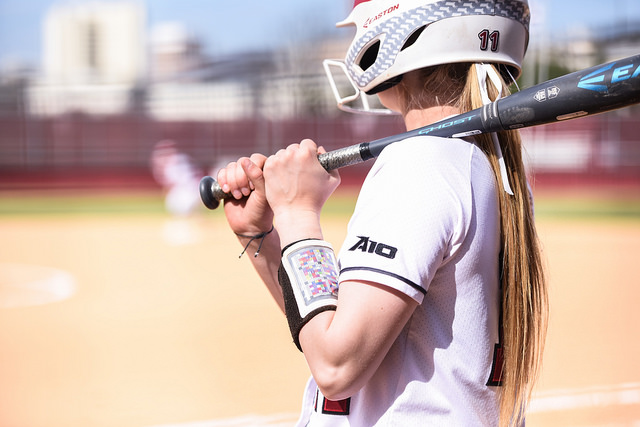 There’s two on and two out. Trailing 6-4 in the bottom of the seventh inning, Kaitlyn Stavinoha steps up to the plate.

Representing the game-winning run in the final inning of the Atlantic 10 championship game against Fordham, Stavinoha digs into the left-handed batter’s box and readies for the pitch. Like many young ball players, Stavinoha dreamt of a moment like this her entire life. The opportunity to change the fate of the championship is in her hands.

And all it could take is one swing of the bat.

The count is 2-2. The Ram pitcher winds up and fires a ball toward the outside corner of the plate.

The ball soars through the air the opposite way to left field.

Backpedaling, the Fordham left-fielder reaches her glove hand across her body. Up against the towering left field wall at Fordham’s Bahoshy Field, she secures the ball in her glove for out number three.

Nine months removed from their A-10 championship loss, the Minutewomen are back in the batting cages at Boyden Gymnasium, hammering softballs like it’s the Home Run Derby. They’ve just returned from a weekend playing preseason games in Florida. There’s a distinct sense of determination in the air.

Following its second consecutive A-10 championship loss to Fordham in as many years, the Minutewomen are ready to get revenge in 2019. With Stavinoha at the top of the UMass batting order, they are poised for another title run.

The UMass senior class has certainly been through a lot together. During their freshman season, they finished third in the A-10 tournament, losing to Fordham in the consolation bracket. After losing in the championship game during its sophomore and junior years to Fordham, the seniors know it all comes down to this final season.

“It has to be [our year],” said Stavinoha. “This is our last year, it’s been our main goal ever since our class came in. This is it, we got to give it everything we have, and I definitely think this is the year we can do it.”

After finishing a historic 21-0 last season and retaining most of its talent, UMass knows any championship run they make comes with a major target on their back. Preseason polls have the Minutewomen favored to win the Atlantic 10 conference.

“We know we’re the team everyone is gunning for this year,” said Carbone. “You have to use that to your advantage. You have to be a little, not cocky, but confident for sure.

“We knew last year we really should have won the title. This year, we have a ton of returners, so we’re confident we’ll win it this year.”

The confidence shown by UMass is warranted. It finished first in the A-10 last season hitting .355 in conference games, first in ERA at 1.23 and first in fielding percentage at .979. Leading in statistical categories in each major facet of the game, it’s hard to find much room for improvement. However, the mindset for the Minutewomen hasn’t changed a bit.

“I think we’re trying to keep up what we did last year because it was such a good season,” said Carbone. “That and making sure everyone is doing extra.”

“The expectation as an individual and as a team is to do extra always and then just make this program a priority,” Carbone continued. “Keeping in mind that every year we’ve gotten better, that’s always the goal. We’re just always trying to get better.”

Doing a little bit extra is certainly going to be necessary for the Minutewomen this season, as the stacked roster loses All-American third baseman Jena Cozza to graduation. The presence of Cozza—who set the highest single-season marks at UMass in slugging percentage at .978, on-base percentage at .636, runs with 63, and walks with 34—will certainly be missed at the top of the UMass lineup. Often getting the Barry Bonds treatment, including being intentionally walked with the bases loaded in the A-10 championship game, Cozza was named Player of the Year for the A-10 last season, slugging a conference-leading 17 home runs.

Carbone, who ranked second on the team in home runs last season with seven, thinks it’s going to take a group effort to make up for Cozza’s absence.

“I know that it’s going to be several of us replacing what we lost out of Jena,” said Carbone. “Just stepping up even more from last year. I’m not trying to be Jena but I definitely [expect to] step up and provide a little more power this year.”

Coach Kristi Stefanoni doesn’t believe filling Cozza’s shoes will be too much of a burden either. Stefanoni thinks filling Cozza’s power hitter role will have a trickle-down effect from the top of the roster, to the newcomers at the bottom.

“I think a couple of veteran players that have the capability to step up for us and be big for us in that role,” said Stefanoni. “Kaitlyn is one of them, I think Kaycee is another one. Melissa is another one. I think if they can kind of set the tone for the younger kids, you’ll see those younger kids step up and fulfill those roles as well.”

Stavinoha could be vital toward setting the tone for the younger players on the team. Known for her competitive spirit both on and off the field, Stavinoha’s intensity could prove contagious to the newcomers.

“I think that Kaitlyn has always been a really great example of what competitiveness looks like on and off the field for this program,” said Stefanoni. “She takes everything she does within softball very seriously. She’s always looking to get better, watching out for her teammates to see if they can get better. I think she’s a great role model for the younger kids to see a player like that and succeed.”

While roster turnover is expected from year-to-year, following the same mantras as years past has continuously propelled the Minutewomen to its success.

Entering each season, Stefanoni picks out words for the team to live by. For the 2019 season, she’s kept some of the same ones that led to the team’s success last season: family, trust and blue-collar.

Cultivating a trusting, family like culture has always been a priority for Stefanoni. Knowing that her team will have each other’s backs on and off the field, Stefanoni promotes a team culture that sets and accomplishes goals together as a unit.

For the players, cultivating a family like atmosphere has helped them cherish the moments they spend together.

“We’re all so close and we all just have an amazing relationship,” said Stavinoha. “It’s the best part about being here. The relationships you make with your teammates, your coaches, everyone involved. That’s awesome.”

Keeping a blue-collar attitude has also propelled the Minutewomen to their success. Playing most of its preseason tournaments against Power-Five schools, UMass’ gritty attitude knows they must work their heart out to compete.

“We just go out there and work hard every day,” added Stavinoha. “Obviously, we’re a mid-major. These tournaments we’re playing against these big teams and no one is giving us the expectation to win but we’re always expecting ourselves to win. We just go out and play hard and grind it out.”

At the end of the day, the Minutewomen know they don’t want to feel the same upsetting, disgusted feeling at the end of the season like they have the past few years. Finishing five-feet away from being crowned 2018 Atlantic 10 champions, Stavinoha and the Minutewomen are using last year’s failures to drive themselves this season.

“You just have to take the mindset of: Yeah, it sucks, yeah you lost and yeah you made the last out,” said Stavinoha. “But it puts a fire under your butt. It makes you want to come out and dominate this year.”

As ultra-competitive as she is, a fire under her only intensifies Stavinoha’s desire to be crowned a champion. And with her leading the way, the Minutewomen are poised for revenge in 2019.