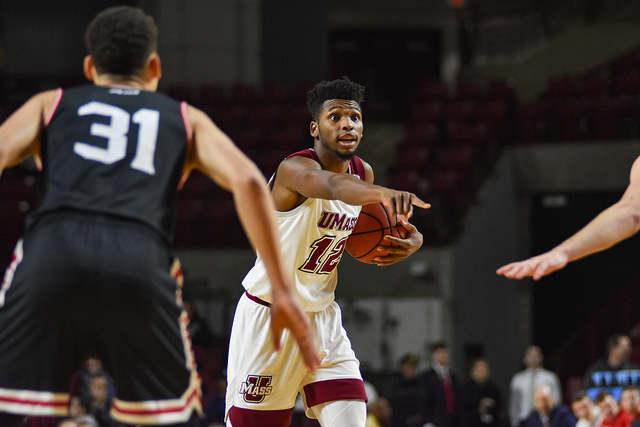 Despite holding a four-point lead with less than a minute to play in regulation, the Massachusetts men’s basketball team dropped a heartbreaker to George Mason Wednesday night, falling 80-75 on the road.

UMass (9-16, 2-10 Atlantic 10) gave up a layup to Jordan Miller with just under a minute in regulation, then missed on the other end to give George Mason (15-10, 9-3 A-10) a chance. Otis Livingston II found Justin Kier on the breakaway to tie the game with 21 seconds left and Keon Clergeot threw up a wild three at the buzzer that didn’t fall.

“We should have found a way to close the game out in regulation, and we didn’t do that,” coach Matt McCall said to the Daily Hampshire Gazette. “And we had chances to, and we just didn’t get enough stops in overtime.”

Although the Minutemen scored first in overtime, George Mason pulled away, scoring 20 points and shooting 11-of-12 from the foul line in overtime to preserve the win.

UMass trailed by just one with 18 seconds to play in OT, but the Patriots knocked down enough free throws to hold on. The one miss came with eight seconds left and a three-point deficit for the Minutemen, but the ball got knocked into the air and George Mason’s Javon Greene came down with the rebound. Greene then stepped up and hit two free throws to stretch the lead to five and effectively end the game.

“I don’t think we got a stop in overtime,” McCall said. “They scored 20 points in overtime. Our defense in overtime was really, really bad. Blew away too many pick-and-roll coverages there, and just couldn’t find a stop.”

While George Mason shot well from the line late in the game, UMass gave away a plethora of fouls. A month after the Patriots went 20-of-22 from the charity stripe in a win at the Mullins Center, George Mason went to the line 37 times, making 27 of those and shooting 21-of-24 on free throws after halftime.

“The minus-21 free throw margin, it’s hard to win,” McCall said to the Gazette. “That was a big key in the first time we played them, that was a huge key tonight. They shot 27 free throws to our 16, they made 27 of them. That’s a huge discrepancy, especially on the road.”

With the loss, UMass squandered a fine game from Carl Pierre, who scored a career-high 26 points on 10-of-20 shooting, including 6-of-12 shooting from 3-point range. On the defensive end, freshman Samba Diallo stepped up, pulling down 12 rebounds and three steals before foul trouble and a brief knee injury forced him to the bench.

In the absence of Luwane Pipkins, freshman Tre Wood led the offense for much of the night, recording eight assists and playing 37 minutes despite battling cramps throughout the second half.

“Whatever I got to do to win, I just got to push through it,” Wood said to the Gazette. “I know I’m a freshman and I got time and all that, but I’m just really tired of losing to be honest. I’m ready to win. I feel like as a team, we can really turn it around.”

Although UMass held a seven-point lead with three minutes to go in the first half, a series of mental gaffes, including a technical foul for six men on the court, allowed George Mason to tie the game by halftime. The Patriots then ripped off a six-point run in the first two minutes of the second half, forcing McCall to burn a timeout to resettle his defense.

“We can’t just keep coming out flat at the beginning of every half,” Wood said to the Gazette. “We played a good half the first half, came out a little flat the second half, and that’s something we just can’t do.”

Despite the loss, the effort level was still high, which was a serious enough concern after last week’s loss to Fordham that McCall moved practices out of the Champions Center.

“I thought our effort level was good,” McCall said. “Especially considering the day that we had yesterday, not being able to practice yesterday and getting here late, and coming out here and having a great spirited shootaround this morning. But we just couldn’t get the stops we needed to in overtime.”

UMass has a week off to rest and recover before its next game, a road contest against George Washington.