UMass students to vote on education, environment and funding in 2019 ballot questions

University students will vote this week 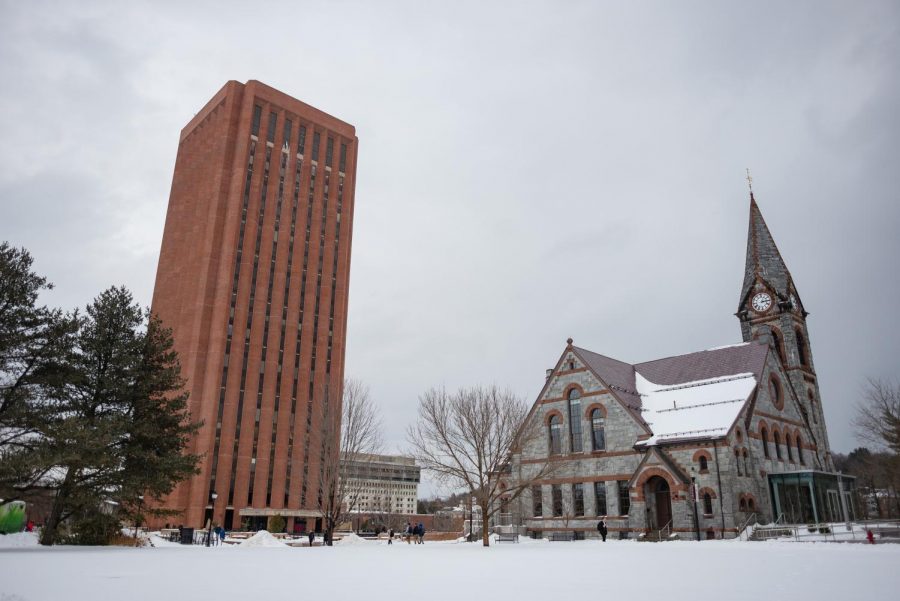 By Irina Costache, Will Katcher, Leticia Medeiros , and Kathrine Esten

University of Massachusetts students will vote on three ballot questions regarding a fee toward funding a student organization research chapter, higher education funding and renewable energy.

The voting period will open on Tuesday Feb. 19 and last until Thursday Feb. 21. During this time, students can cast their ballot online through logging into Campus Pulse.

The first ballot question up for a vote concerns the $11 waivable fee that students pay on their tuition bill. This $11 fee currently goes toward funding both the UMass chapter of the Massachusetts Public Interest Research Group (known as MASSPIRG) and other chapters across the state. The UMass chapter has been running since 1972, making it one of the oldest PIRG chapters in the state.

“Every two years, we choose to run a campaign to reaffirm student support for our chapter,” said Gabriela Colmenares, a campaign coordinator with MASSPIRG. “We always run a petition drive during our reaffirmation vote in order to educate as many people about our work and what we’re able to accomplish because of the $11 student fee that supports our work.”

“Often, we hear this narrative that you are not going to be able to be an activist or advocate until you’re out of college, and we disagree with that narrative,” said Ferrara-Lawlor, who is a sophomore psychology major. “We want our organization to be a resource so that college students can actually stand up for their beliefs before they exit into the real world,” Ferrara-Lawlor said.

Ferrara-Lawlor said that she sees the group as a resource for students, adding that “students can walk in and say, ‘Hey, I want to learn how to be an activist, or run a campaign,’ and we’d happily assist them with that.”

Sarah Vonck, campus organizer for the UMass chapter, says there are over 100 students consistently involved with the organization.

“That doesn’t mean that they are doing it every single day, but, maybe like once a week, they come to a meeting on a campaign they’re working on,” Vonck said.

Currently, the chapter is working on five campaigns: the “New Voters Project,” “100% Renewable Energy,” “Hunger and Homelessness,” “Save the Bees” and “Affordable Textbooks.”

According to Colmenares, the initiatives on using open educational resources “[have] already saved students over $2 million in the last 8 years.”

In the future, the organization is looking at a campaign to reduce plastic usage on campuses around the country, but Vonck added that they are open to hearing students’ concerns about issues on campus.

Voting “yes” on the ballot question would keep the $11 waivable fee in place on student tuition bills and continue funding MASSPIRG.

“Vote yes for MASSPIRG so we can continue to make tangible social change on issues that we care about,” Colmenares said. “The decisions made today about how we tackle climate change, poverty and threats to our public health will affect us long into the future and long after we graduate.”

A second ballot question concerns the use of renewable energy on the UMass campus.

According to SGA President Timmy Sullivan, a “yes” vote would encourage the University to transition to using 100 percent renewable energy. Sullivan’s office placed the question on the ballot directly.

Samantha Gibb, the state MASSPIRG organizing coordinator, said that MASSPIRG endorsed Sullivan’s ballot initiative, noting that the statewide organization “helped to introduce the 100 percent Renewable Energy Act at the statewide level that was recently co-sponsored by 113 legislators in the MA legislature.”

The third ballot question concerns the “Fund our Future” bills – the PROMISE Act and CHERISH Act – currently in the Massachusetts state legislature. A “yes” vote on the ballot asks UMass President Marty Meehan, Chancellor Kumble Subbaswamy and the University Board of Trustees to endorse the bills.

If passed, the bills would update the formula used for public education in Massachusetts, dramatically increasing investments at all levels of education. Specifically, the CHERISH Act – Bill SD.740- would restore UMass funding to 2001 levels ($574 million per year over the course of five years), allowing for a tuition and fees freeze.

According to James Cordero, an organizer with the Center for Education Policy & Advocacy and an SGA senator, the bill would be a “huge victory for affordability.”

“…as students lobby the legislature to pass these bills during Advocacy Day on [March 21], having the Board of Trustees’ public support would be a great showing of unity between students and administrators,” Cordero wrote in an email.

“This question is important because affordability is a huge issue for UMass students, as [three in four] UMass students graduate with debt, and the average UMass student graduates with $30,000 in student debt,” he added.

In an article by the Massachusetts Teachers Association, SGA President Timmy Sullivan said that in public colleges and universities, “too many students are burdened with tens of thousands of dollars in debt, whether or not they receive a degree.”

“We need legislators to fund our future. We can’t afford to wait any longer,” Sullivan added.