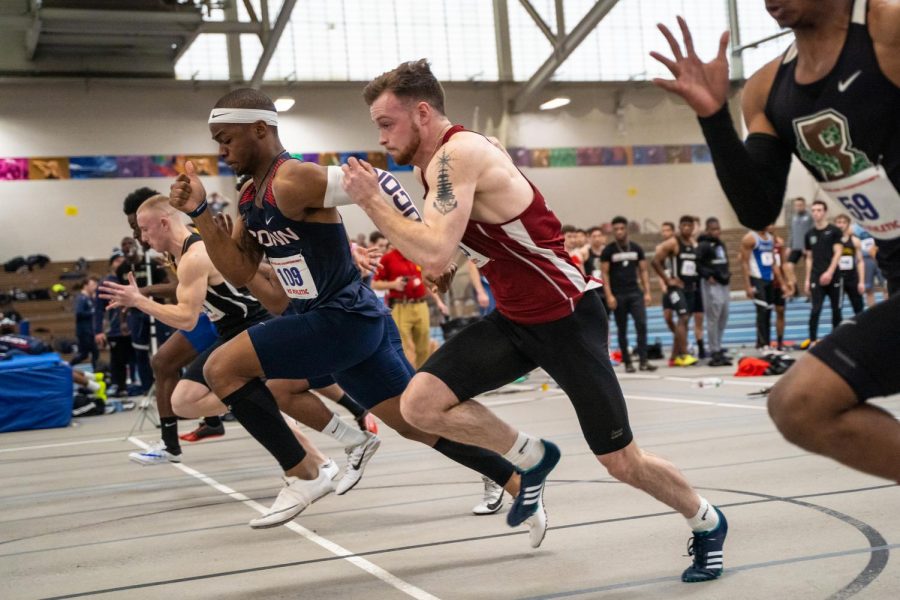 This weekend will mark the last time the Massachusetts men’s and women’s track teams will be competing before the Atlantic 10 championships in two weeks at George Mason. A-10s are the focal point of each team’s season and what their training regimens have been building toward since the fall.

Distance, mid-distance and oval sprinters will be traveling to the David Hemery Valentine Invitational at Boston University, while straightaway sprinters, hurdlers and field athletes will travel to Rhode Island to compete in the Coaches Tribute meet.

The women competing at the Valentine Invitational will start the action at 2 p.m. on Friday, while the men will continue the action at 11 a.m. the next day. For the Coaches Tribute meet, events will start on Saturday at 10 a.m. for each squad.

Coming off a sixth-place finish at the New England Championships last week, the Minutewomen have no lack of confidence and are sure to use this weekend’s meets to fine tune each athlete’s plan for success.

It will be interesting to see if coach Julie LaFreniere races her top athletes, such as senior Emile Cowan and junior Jada Harris, or opts to hold them out of the meets to give extra rest before A-10s. Either way, the Minutewomen have a plethora of talent and are sure to post solid results.

One athlete to look out for, if she sees action, is sophomore Bryanna Rivers. The Tampa native earned a silver medal in the 800 meters for her performance at the New England Championships last week and ran a season-best 2:12.16 the week prior. Rivers is beginning to perform at a high-level for the Minutewomen and could take the A-10 by storm.

Just like the women’s team, the Minutemen are looking to continue a string of successful meets. The men finished with three different relay teams in the top eight at New Englands last weekend, including the 4×800 team who finished second.

“We’re just looking to continue to sharpen up,” Minutemen coach David Jackson said. “Each week has been a building week, so every week we need to be a bit better and that’s what we’re looking for this upcoming weekend. This way we be our best and compete our best before conferences.”

Jackson is planning to let his top athletes compete to make sure that each one is continuing to progress.

Michael Cuthbert is a competitor to watch for the Minutemen after he didn’t see action at the New England Championships. Cuthbert posted a 21.74 200-meter time earlier in the campaign which is the second-best mark in the Atlantic 10 conference this season. If the junior sees action, he could easily achieve a season-best, which would give him plenty of confidence heading into conferences.

Sean Richardson can be reached by email at [email protected]