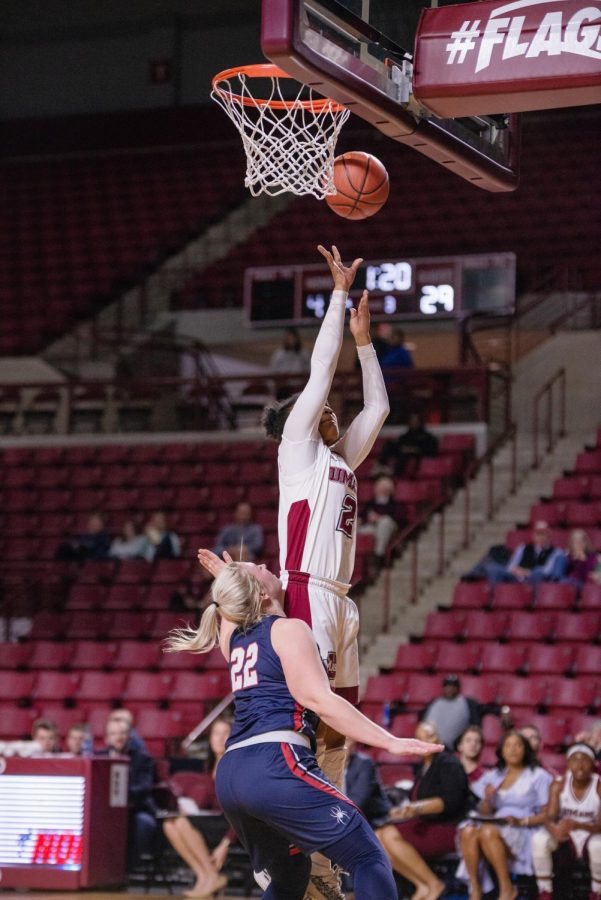 Thanks to a strong second half performance, the Massachusetts women’s basketball team was able to cruise to a 64-38 victory over Richmond Wednesday night.

Senior Jessica George scored a game-high 15 points on her birthday which also served as her final home game with the Minutewomen (14-15, 6-9 A-10).

“I think I just got hot, honestly,” George said. “I just kept going with the flow of the game. My teammates were hyping me up and I felt the energy.”

George got especially hot in the fourth quarter, making three 3-pointers to score nine of her 15 in the final frame.

The Spiders (8-20, 5-10 A-10) struggled to get anything going offensively after the first quarter, scoring single digits in each of the final three frames. Richmond only managed 24 points across the final three quarters of play as opposed to UMass’ 46.

“I thought it was a great total team win,” head coach Tory Verdi said. “I thought our players did a great job following the game plan.”

The Minutewomen were able to completely take Jaide Hinds-Clarke out of the game, only allowing the Richmond star to score six points and tally seven rebounds.

“We wanted to double their best post player [Hinds-Clarke],” Verdi said, “and we totally took her out of the game and took away what they wanted to do.”

On the night, the Minutewomen outrebounded the Spiders 41-to-23, including 13 offensive rebounds. The extra possessions netted UMass 10 second-chance points to Richmond’s two.

“Boxing out and rebounding were two key things we had to focus on,” George said. “From the jump, that’s what we focused on and it showed throughout the whole game.”

Hailey Leidel did not have a huge scoring output but managed to contribute for the Minutewomen in other facets of the game. The junior scored seven points but also added 10 rebounds, three of which were on the offensive end of the court.

The Minutewomen were effective at moving the basketball Wednesday night, having assists on 18 of their 26 field goals.

As a team the Minutewomen caught fire from behind the arc. UMass shot 10-for-24 from three, accounting for 30 of their 64 points.

Heading into the final minute of the contest, UMass had yet to get to the free throw line, a feat that had never happened dating back to at least 2002.

That is until senior Mackenzie Sullivan got fouled on a layup and was sent to the line. With under a minute remaining in her Mullins Center career, the senior calmly sunk two free throws to record the first two points of her UMass career.

As well as Sullivan, sophomore Lauraine Joensen also tallied the first two points as a Minutewomen with a jump shot from the paint in the final minute of play.

“It was great, it was emotional,” Verdi said. “Those are two players who come to practice just like everyone else every single day, especially Mackenzie, this is her last home game and to score two points from the free throw line I was so excited for her.”

The Minutewomen wrap up their regular season schedule against Rhode Island on Saturday. Tip-off is set for 2 p.m. in Kingston.