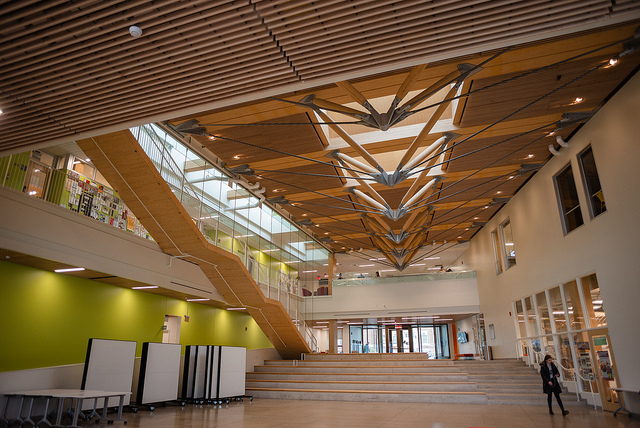 Phillip Langdon, journalist and author of “Within Walking Distance: Creating Livable Communities for All,” gave this semester’s fourth Zube Lecture Series presentation on Wednesday afternoon in the design building.

Using various American cities such as Portland, Philadelphia and Chicago as examples, Langdon analyzed the components of a less car-driven and pedestrian-friendly city.

“Walkable communities are better for the environment,” Langdon said. “Knowing full well about climate change and global warming, living in communities where we are walking more or using public transport rather than cars is huge.”

Along with the environmental aspects, Langdon discussed the benefits walking could have on public health.

“Having walkable communities gets people to get a little more physical exercise in their life,” Langdon explained.

Even though social media and the internet might connect people through technology, taking a walk outside could help in strengthening personal connections between neighbors, Langdon said.

“A lot of people nowadays feel somewhat disconnected from their neighbors, and we’ve learned that being within walking distance to many helps people feel like they’re part of a community,” Langdon said. “They’re also good for civic problem solving in that once people do come together, they end up inevitably talking about civic issues and what’s happening in their city.”

Langdon argued that if people are more inclined to take a stroll down the street, smaller businesses might feel significant positive economic impact. More people on the street could equal greater cash flow, he said.

“Some of these walkable communities [that] I will present have been able to keep some of their small businesses even when the economy has been bad around them,” he said.

Traditional methods of transportation like cars are becoming less popular in cities that have put a greater emphasis on walking, he said, using the example of Portland, Oregon.

“In 2004, 2.8 percent of Portlanders biked to work, and by 2014, 7.2 percent did — the rate almost tripled. As for another example, in 2005 to 2015 the vehicle miles in travel per person in the Portland area dropped by 12 percent,” Langdon said. “It completely went against what we thought was an inevitable upward trend — that the amount of vehicle miles traveled per person has been on an upward trend.”

Regarding Langdon’s research on walkable communities, Georgy Shukaylo, a senior sports management and operations and information management double major, was optimistic in the future of pedestrian-focused city planning.

“I think the Pacific coast has a lot of opportunity to become walkable communities. Cities with strong university cores such as Eugene, Oregon or Seattle, or California in general, all could be viable options,” Shukaylo said.

Translating these ideas to big cities on the east coast might be easier than smaller towns like Amherst, assistant professor of regional planning Michael DiPasquale said.

But the west coast seems to be ahead of the curve on becoming more pedestrian-focused, Langdon explained.

“Out of any of the cities I surveyed, I think I would most want to live in Portland. It has done so much over the past 30 to 40 years, and they just keep learning and advancing, and putting what they have learned into practice,” he said.