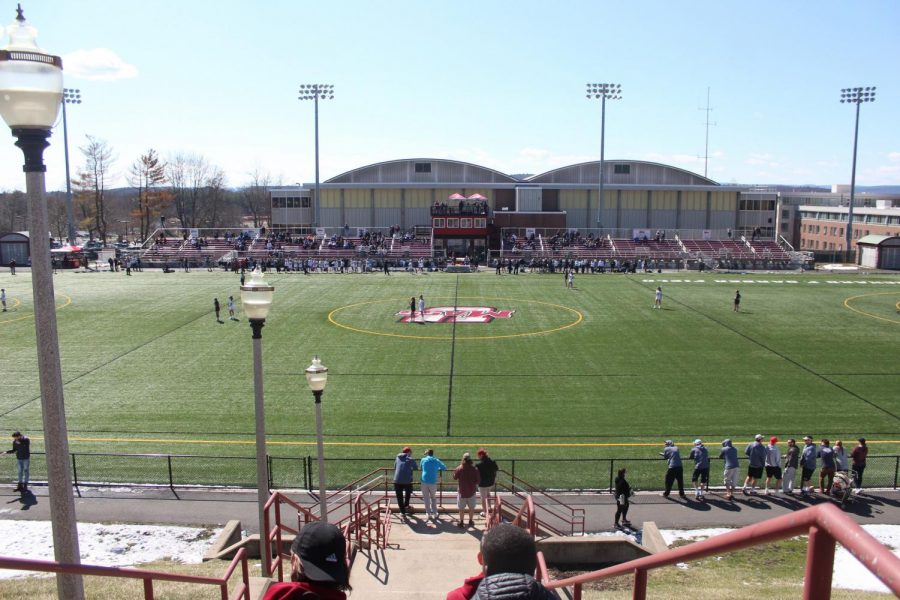 Outside of the coaching staff whom they work for, few people are aware of their value to the Massachusetts men’s lacrosse program.

The part that they play in the day-to-day operation of UMass men’s lacrosse is essential, but not the most glamorous. Throughout much of the school year, they adhere to the coaches’ needs, taking on much of the grunt work of the program while getting paid little to nothing.

Their names are Jack Schille and Geof Kidger, and they are student assistants to UMass men’s lacrosse. To be more precise, they are the director and assistant director of operations, respectively. In plainer, more colloquial terms, they are the team’s managers.

Whatever their designation, Schille, a sophomore natural resource economics major, and Kidger, a senior sport management major, are viewed as godsends by the coaches.

Without Schille and Kidger, there would be “a lot less time for us to be able to focus on coaching the guys, doing the recruiting stuff that we do, the administrative stuff that we have as well,” said associate head coach Craig McDonald.

Kidger’s services are entirely voluntary, and Schille is compensated with minimum wage, able to max out his hours at 20 per week, though he is not paid for travel time to away games. Head coach Greg Cannella believes that Schille performs the kind of work that a full-time director of operations would typically be paid “$75, $80K a year for.”

So, what exactly do Schille and Kidger do for the team?

A typical day of practice involves Schille and Kidger getting to the coaches’ offices in Boyden Gym about 30 minutes before the players take Garber Field. They’ll check out the practice plan that’s laid out, conferring with McDonald and fellow associate head coach Doc Schneider about which drills they want filmed for the day. In the time between then and practice, they’ll hang out in the office, with Schille cutting film and Kidger working on stats.

From all the time they spend together in the offices, Schille and Kidger’s relationships with the assistants have extended beyond lacrosse.

“We’re playing basketball with Doc and Mac a few days a week, so we’re with them a lot of the time,” said Schille, who was notified about his current position through a Sport Management Club email chain and was brought along by former director of ops Will Homsy as a freshman.

Kidger, who obtained his volunteer position after emailing Cannella directly, doesn’t record official stats; what he does is more of an independent project. Kidger makes shot charts for both the team and individual players, configuring players’ shooting percentages from certain zones on the field once he has a large enough sample size. From there, Kidger can calculate offensive players’ expected goal value and expected goal value per opportunity for dodgers, shooters and passers.

For instance, if Chris Connolly were to pass to Billy Philpott for a shot in an area where Philpott shoots 40 percent, Kidger would reward .4 of a goal to Connolly and Philpott, regardless of whether or not the shot finds the back of the cage.

“With Sean [Sconone] and his development — and obviously, as coaches you see stuff and you have ideas and notions about what to work on — but when you present facts to guys, it helps you a lot,” said Schneider.

“So, when I was able to say to Sean, ‘Hey, listen. This isn’t coming from me, but Geof was able to chart this. This is really where your weakest spot is,’ showing that kind of thing…it really helps us support what we want to work on with the guys.”

Once the team takes the field to begin its dynamic stretches, Kidger and Schille head up to the press box to set up the game clock, shot clock and camera. After they’re done filming practice, they’ll upload the film to the team’s Hudl account.

“Generally, we’ll take turns with the camera and shot clock and things like that,” said Kidger, but Schille takes on the task of cutting the film, while Kidger does the stats. The addition of freshman Adriel Pacheco to their two-man manager team in the past week has alleviated some of Schille and Kidger’s duties.

“Now that we have Adriel to help us, he can kind of be the middleman who does a lot of the filming, while Geof is busy with stats and I’m busy with the cutting,” said Schille.

“We used to do all [the film cutting] ourselves,” said Cannella. “We had back-to-back VCRs, we put the [tape] in there and watch it, then – clip, clip – this part of it, but you had no opportunities to diagram, to make drawings, to make comments.”

Though the job requires some technical skills with camerawork, cutting and stat-crunching, communication is “a huge part of this,” Schille said. Being on-time and updated with the schedule means Schille and Kidger must have clear lines of communication with the coaches and players.

On game days, Schille and Kidger aren’t responsible for operating the shot and game clocks, but they do pick up other practical duties, like meal preparation and coordination. Additionally, as they film games, they send video clips down to the coaches’ iPads so that the coaches can review plays on the sideline. Per McDonald, this is a new system the team has used for two years now.

To Schille, the hardest part about the job is the commitment.

For Kidger, the hardest part is having to deal with challenges posed by the technology.

The track record of the men’s lacrosse team’s student assistants graduating to significant positions in sports is impressive.

Tim Tracey ‘12 previously worked in the University of Kentucky’s athletics tickets office, Carl Uttaro ’06 was once the director of ops for Major League Lacrosse, and Lenny Paoletta III ’17 — whom Schneider called the “godfather” of UMass men’s lacrosse student managers — worked for the Allstate Sugar Bowl and is now an Events Coordinator for the Kansas City Chiefs. All three had previously served as director of ops for UMass men’s lacrosse, and that’s only to name a few.

In his time with the team, Paoletta actually put together a manual — it’s over 60 pages, according to Schneider — which Schille and Kidger refer to for advice on “anything from all of our softwares that we use” to “how to use specific softwares” to “what cords [are needed],” said McDonald.

As a sport management major, Kidger hopes to follow in the footsteps of these recent alumni and work in sports for a living. Schille, on the other hand, doesn’t see sports playing into his professional aspirations, but he’s already seeing tremendous crossover between the skills he’s acquired from his role with the team and the skills that internships are looking for.

“I’m applying for internships this summer, and the big thing is the sense of responsibility,” Schille said. “I’m making it clear to these potential employers that we are in charge of a lot on this team, and it’s kind of up to us to work through it with our problem-solving skills, our communication skills.”

The resume-building impact of the position has been nice but moreover, being the director of ops has given Schille the opportunity to continue to be around lacrosse. A member of the club team at UMass, Schille has played the sport since around fourth grade and called lacrosse “a big part of [his] life.”

Kidger has never played lacrosse, though his dad was an assistant high school lacrosse coach and one of his brothers played Division III lacrosse. “I just like the game,” said Kidger.

Their time with the team has given them a lot, but Schille and Kidger have given even more to the team.

“They mean a ton to us, probably more than they know,” said Cannella.