Across the sheet: Q&A with Spencer R. Morris of the Harvard Crimson

UMass and Harvard head to NCAA tournament this Friday 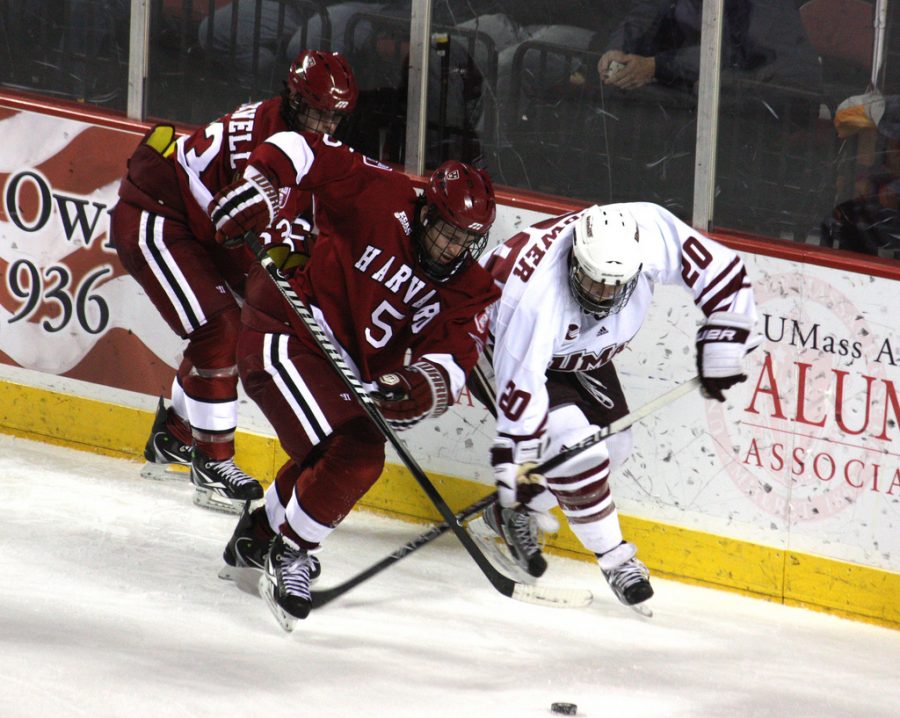 The Massachusetts hockey team is set to battle Harvard in the NCAA Northeast regional first round this upcoming Friday in Manchester, New Hampshire. UMass and the Crimson meet for the first time since 2012 when the two teams skated to a 4-4 tie at the Mullins Center.

I spoke with Spencer R. Morris of the Harvard Crimson to get a feel for Harvard ahead of the matinee at SNHU Arena.

Question: Harvard fell to Clarkson in the ECAC semifinals, 5-2, last Friday. What went wrong for the Crimson against the Golden Knights?

Answer: First and foremost, the team’s start was what did it in. Conceding two goals by the time the game is just five minutes old is not a winning formula. Coach Donato has harped on it since last season, when it was a huge problem for the squad: The team needs to “start on time.” Clarkson’s early tallies were particularly disadvantageous for a Crimson team trying to ease its starting net-minder, Michael Lackey, back into game action after he missed the last month of the season with a knee injury. A crucial theme for Lackey’s game throughout his career at Harvard has been stability — or the lack thereof — and ceding two goals early on certainly did not help him regain the confidence or stability he had earned throughout the regular season. Clarkson and Harvard are both skilled, possession-based teams (although the Golden Knights have size going for them), and it seemed like only Clarkson “played their game” through the first 30-35 minutes of the contest on Friday.

Q: Adam Fox is the top point-getter for Harvard and one of 10 Hobey Baker Award finalists. What makes Fox one of the best defensemen in the country?

A: Fox is one of the most talented college hockey players to ever wear the Crimson jersey. He’s the main cog in a prolific offensive and quarterbacks what has consistently been the best power play in the league in 2018-19.

I think two things make Fox so dangerous: For one, he is such a level-headed player. He responds the same to all situations, and his poise on the ice is an asset for the entire team. Additionally, Adam Fox has the best vision I’ve seen at the college level. Sure, his quick dekes and stick skills wow the audience on a nightly basis. But his ability to thread breakout passes that nobody else can pull off, to have the patience to wait for the perfect timing on a set-up pass and to command so much attention because of these skills are what make him lethal. He slows the game down to a crawl while he picks the perfect feed. This is especially apparent on the power play, where Fox spaces the penalty killers and opens seams by drawing all four pairs of defending eyes. A pretty underrated aspect of Fox’s game is his ability to keep the puck in the zone, especially on the man advantage. It often seems like Harvard’s No. 1 power play unit has two minutes of uninterrupted zone time (unless, of course, the group cashes in before then).

And Fox is more than serviceable defensively. People who don’t watch him every night assume that his offensive upside comes at the expense of his defensive integrity. But the same stick skills that help him create offense also help him disrupt plays on the defensive end. As a reporter from the ECAC (compared to you, from Hockey East), I also want to stress that Adam Fox has put up close to 50 points in a much more defensive, physical league than Hockey East or the Big Ten, for example. While there’s plenty of skill in the ECAC, the conference at large plays a more balanced style. A guy like Fox on a team like Penn State, for example, might put up 60-70 points (and would have a few more games to do so, since the Ivy League teams play a maximum of 29 regular-season games).

Q: The Crimson’s power play has been potent all season and currently ranks first in the country. How have they been able to stay so consistent on the man-advantage?

A: Easiest answer is Adam Fox. Not to beat a dead horse, but the guy is the secret sauce on the power play. That being said, each member of the No. 1 unit plays a vital role. Reilly Walsh players the other point and threatens PK units with his clapper of a slapshot (usually teed up by Fox). He’s also a very above-average puck-mover, but he gets overlooked because he might be the third-best puck-moving defenseman on his team (behind Fox and Rathbone). Jack Drury does the gritty work, winning draws and screening goaltenders. Lewis Zerter-Gossage uses his big body to provide screens and regain possession on loose pucks, while also having a potent shot of his own from the high slot. Casey Dornbach, arguably the biggest surprise of the Crimson’s season (ECAC ROY despite being undrafted, etc.), is a really effective distributor. He patrols the half-wall looking for Drury down low, LZG in the middle, Fox up top, or Walsh through the seam. These five guys work so well together, and unlike last year where Ryan Donato was the option on the power play, all five players on the first unit can make a PK unit pay.

Q: UMass and Harvard meet in the NCAA Northeast regional this Friday at 3 p.m. at SNHU Arena in Manchester, New Hampshire. Any thoughts on how that one shakes out?

A: It’s tough to say. Obviously, UMass enters as the favorite. They’ve been great all year, and they have a Fox of their own (perhaps a bit more well-rounded of a player, too) in Makar. I think these teams will play an offensive game, and since the styles are similar enough, I would not be the least bit surprised if it comes down to who executes their chances and who does not. Could see it going either way, maybe with a score of 4-3 or 5-3. In the spirit of March Madness, I’ll take the underdog. Harvard, 4-3.

Ryan Ames can be reached at [email protected] or followed on Twitter @_RyanAmes.