Ames: What went wrong Friday, and where UMass hockey goes from here 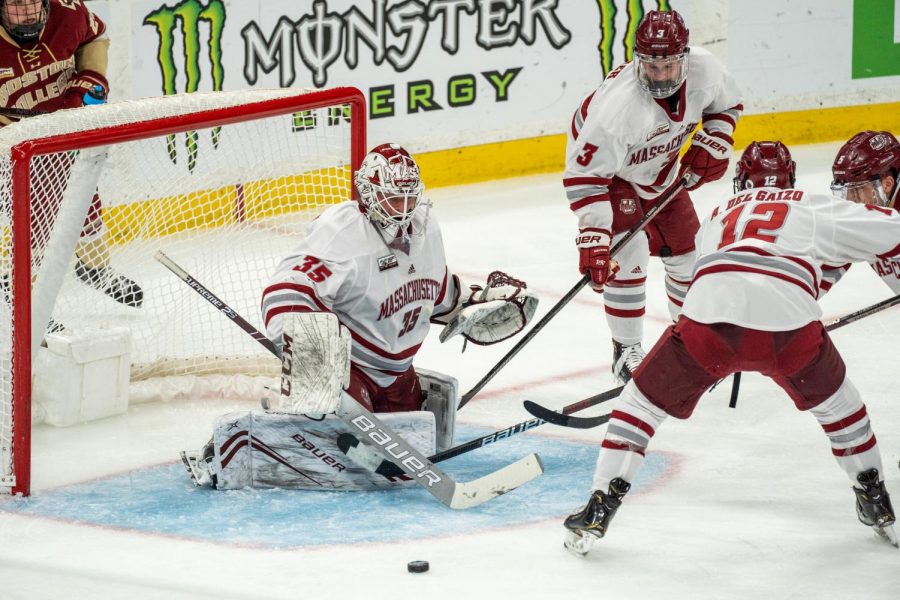 The Massachusetts hockey team looked out of sorts Friday night.

That’s the simplest, shortest way I can put it.

Its confidence was missing, its execution was off and its game plan was completely overrun by a Boston College team fighting to keep its season alive.

Playing its first game at the TD Garden since 2007, a jittery first period was expected. UMass didn’t have the experience of playing in such a high-profile Hockey East contest and the atmosphere wasn’t something any of the players on the roster—save for maybe Cale Makar and Filip Lindberg—were used to.

I expected the nerves to get the better of the Minutemen in the opening period as the adjustment usually takes 20 minutes. The thing that really hurt them was that they never seemed to snap out of that “Wow, we’re playing at TD Garden” feeling.

Coach Greg Carvel summed it up perfectly in the post-game press conference when he said that he felt nobody seemed to want the puck on their stick. Pucks were being dumped in on almost every zone entry and UMass relied way too heavily on chipping pucks off the glass for its breakouts.

In essence, the Minutemen struggled maintaining possession and when they did, they gave it right back to the ever-so-patient Eagles. UMass’ forecheck suffered because of this as BC counteracted with stretch passes through the middle of the ice after collecting the loose pucks.

The Minutemen tried mirroring the Eagles with long outlet passes into the neutral zone, but BC was there at the red line, waiting for a UMass forward every time.

UMass’ lack of possession was compounded when BC scored a late goal in the first period, forcing the Minutemen to chase the score the rest of the way. Spurts of momentum gave the appearance that a goal was coming soon for UMass, but those moments were fleeting with not much substance behind it.

If the Minutemen had found a way to score a goal, I would have bet another one would have followed shortly thereafter. All season, UMass has used that first goal as a kickstarter for its offense, with multiple goals coming not too long after that initial strike.

The obvious problem on Friday was that that never came, and the Minutemen couldn’t swing the flow their way long enough. Learning how to tilt the ice in their favor without scoring a goal will be key in the NCAA tournament.

Now, there are some positives to take away from the loss.

First, Filip Lindberg made it clear he was the right choice in net. The freshman didn’t seem fazed by the bright lights and was as calm as ever in the UMass crease. His second-period pad save on an Eagles power play brought the Minutemen faithful to their feet and kept the deficit at just one goal. Losing in the fashion UMass did is tough to swallow, but knowing your goalie played about as well as he could have helps a ton.

I really liked Jake Gaudet’s line, Bobby Trivigno and Marc Del Gaizo too. They all appeared to have relished in the circumstance of playing in such a big game. I believe just about every scoring chance came from either Gaudet or Mitchell Chaffee, Trivigno was actively making things happen all over the ice and Marc Del Gaizo took open ice in front of him and had a few good rushes into the attacking zone.

The Minutemen clearly needed more than a handful of guys to be on their game, but having some as opposed to none shouldn’t be overlooked.

Finally, UMass has not lost back-to-back games this year. Fact. Every lost game has been turned into a motivator for the next one and I expect the same thing to happen this time around. Granted, it’s not the most ideal situation, but it’s been proven effective.

The Minutemen realize they had a let-down in Boston and that should fuel the fire for the run in the NCAAs. I guess they really don’t have a choice at this point because there’s no more learning from losing opportunities from here on out. A loss ends their season so it’s hard to imagine any scenario where they aren’t completely locked in this Friday.

Sticking to its standard has been a trademark of UMass hockey all season, so if it can get back to that then it’ll be fine, no matter what stage it’s on.