An interview with FiveThirtyEight’s Clare Malone

Malone is a senior political writer at the site 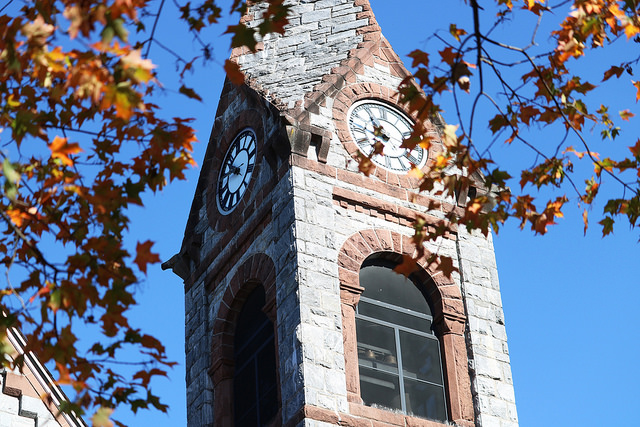 Clare Malone is a senior political writer for FiveThirtyEight.com, a data and analysis website primarily covering politics and sports. She visited Amherst College on Tuesday night as a guest of the Amherst College Democrats. After her talk, she spoke with the Massachusetts Daily Collegian. Remarks are edited for length and clarity.

Will Katcher: I wanted to start with the FiveThirtyEight Politics Podcast that came out earlier this week or last week – the live one – and about the draft you guys did. I had that you picked [former congressman from Texas] Beto [O’Rourke] and [Minnesota senator] Amy Klobuchar. I was just wondering how you saw that play out – the draft as a whole, why you specifically liked those two.

Clare Malone: So the draft is something sort of fun, and I wouldn’t call it quite goofy, but it’s our way to think out, I guess theories of the case for what might win the presidential election, and I think that O’Rourke might have been my first round pick. If we’re going off one of the theories of the case for winning the Democratic primary is appeal to the millennials and urban demographic that has such growing strength in the Democratic Party, but also to try to give a nod to the white demographic that the Democrats have struggled with a little bit in, say, the Upper Midwest, then O’Rourke is sort of an interesting marriage of the two. So that I think is why I chose him. Klobuchar – I guess that night I was thinking about the Midwest – is pretty openly and proactively moderate. She’s a woman falling on the heels of the year of the woman. The Democratic primary electorate being so predominantly women-led, that I just find her to be an interesting pick. So that was my thought, is that’s one theory of the case, is those white moderates.

WK: So you mentioned Amy Klobuchar, I wanted to know what you thought of the initial stories that came out when she announced her run about how she treats her staff, whether you thought that tied into how women are covered in presidential campaigns or if it’s a valid thing to look at?

CM: It seemed like a valid story, given that it was reportedly sort of giving her campaign staffing trouble. But it’s also been interesting to watch how much it’s maybe not mattering to voters. And I think that you see this during campaigns, that some stories are like ‘Washington stories’ that political types are really interested in reading and some stories just don’t make it down to voters because they don’t care.

WK: And then going off that to the two controversies you mentioned surrounding Harris and Gillibrand about Kamala Harris’ prosecutorial record, Gillibrand’s Al Franken record – is there evidence that you’ve seen that voters are really focused on that or is that another one of those ‘Washington stories?’

CM: The Harris prosecutorial thing, I think it’s kind of too early to say. I think that certain parts of the left just won’t vote for her on principle because of that. I was talking before about, you know as a Black woman, I think Harris had to come up through more establishment halls of power to get to the position that she held. So I think there might be certain voting groups in the Democratic Party that will say ‘we’ll give you a mulligan on that.’ With Gillibrand, it seems to be a pretty clear case of a) I think she’s gotten probably a little bit of a bad rap from some Democratic insiders who liked Franken, but also I do think that to go back to the gender gap in America and the gendered lenses on news stories and I think a lot of men and maybe people of a different generation saw Gillibrand calling out Franken as unfair. A lot of those people exist in the Democratic primary electorate. So in some ways I think Gillibrand has a steeper hill to climb, because she’s less known than Harris and because that was such a high profile story that made a lot of partisans angry.

WK: As a woman working for a major political news site, how did you think other news sites, or the ‘media,’ if I can use that term in general, covered the Kavanaugh hearings?

CM: The Kavanaugh hearings were – in some ways the testimonies spoke for themselves. Whether or not you liked what [Brett] Kavanaugh had to say or whether or not you liked what [Christine] Blasey Ford had to say. The testimonies were compelling in and of themselves, so as far as televised media went, you kind of just had to point the camera and everything flowed from there. I think, you know, you’ve got opinion journalism and you’ve got news journalism and a lot of news journalism really focused on how people’s votes on Kavanaugh would affect their midterm results. So, it was actually sort of interesting media coverage because it was a different way – besides the presidential election – to talk about the way that Americans view things through a gendered lens. And then how it sort of directly translated a few weeks later in November to those gendered partisan gaps in the election. Because a lot of sort of on the margin senators who voted against Kavanaugh lost.

WK: I just want to briefly shift focus to the work you guys are doing at FiveThirtyEight. So I know you guys are giving media grades during the podcast – how do you see your role as being different than a more traditional outlet, beyond being a statistical analysis site?

CM: I think of us as actually sort of more like a magazine than anything else, because some people do analysis, I try to write stories with narrative that have their basis in data, and I think it’s the kind of journalism that’s gaining traction. But we kind of refer to it as ‘empirical journalism.’ Because I think that there can be a lot of sloppy facts or sloppy theses in stories, and we have a very rigorous fact checking process. We have a quantitative editor who makes sure everything is sound math and that the data sets that we use are sound. So I think that we have that, which sets us apart from a lot of other news sites or political sites. And we also have a really wonderful data visualization team that I think for people who think visually and who need to see those numbers in beautiful graphic form, we do that for you. So I think that those are kind of competitive advantages, but I will say – I’ll toot FiveThirtyEight’s horn – I think it’s trickling down to other places and I think that’s really good. I think its a form of journalism that wasn’t well liked not that long ago, or sort of viewed with suspicion from inside more traditional journalism, and I think it’s being welcomed and imitated, and that’s great.

WK: You said you kind of cover more of these narrative pieces. What are a few topics you really like right now that you’re interested in covering?

CM: The demographics of the Democratic primary electorate and the way they view candidates is a really broad topic that I think will be really fruitful for the next year of coverage. So that’s stuff I think about a lot.

WK: Right now, who are one or two journalists or analysts covering politics who you really admire or like their work?

CM: I think Jill Lepore, who’s a writer for the New Yorker, always has pieces that are very thoughtful about American society, and also tie in politics, but go beyond the sort of close-up, to-your-face view of American politics that lot of us have, that kind of pulls back and gives cultural and historical context. So she’s someone who I really admire her work.

WK: Is there anything around the corner that FiveThirtyEight is introducing for this next cycle that kind of came out of 2016 or came out of 2018. What’s the next big step for your coverage?

CM: So we are doing an endorsement tracker, which we’ve done before. I don’t know, actually.

WK: Maybe I can shift the question. What would you like to see the wider media do for the next two years.

CM: I think just be more conscientious – and I think this will happen – about our own role in a campaign, and the way that the media confers status on certain candidates, or takes it away from certain candidates. And thinking about the kind of stories that are assigned. Those are sort of meta things to think about, when a news event is happening you just cover the news event, but then there’s quite a bit in our current media market of analysis stories, and narrative stories about a demographic group, or a certain campaign’s supporters. I think that people in the media need to be really conscientious about the weight that we carry in American society. And I think a lot of us are, and are sort of hip to that now.

WK: Well I know it was a big list of questions but thank you for taking the time to speak to me.

CM: No it was good, it was really nice to meet you. Thanks for coming.