‘Why is it not illegal to sell or trade personal financial information?’ 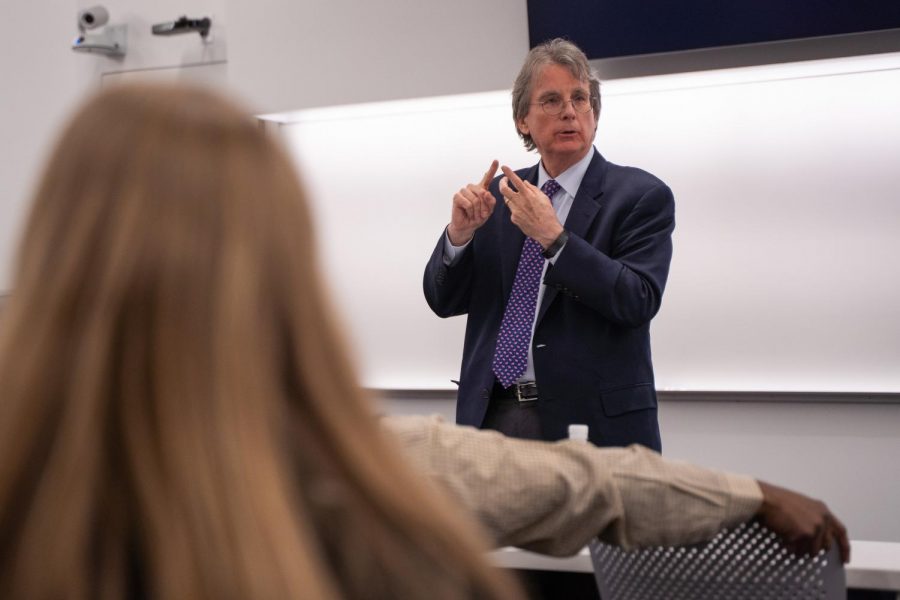 Roger McNamee, a former venture capitalist and author, gave a talk at the University of Massachusetts Tuesday on the dangers of data acquisition by large corporations.

The event, which was a part of the 2019 Spring Management Department Ethics Speaker series, was based around McNamee’s new book “Zucked: Waking Up to the Facebook Catastrophe.” The book chronicles McNamee’s involvement with Facebook and his realization that the platform “is being manipulated by some very bad actors.”

In his talk, McNamee argued that various corporations have been able to effectively collect data from its users using digital surveillance techniques. The data that is collected can be used by the companies or even sold, according to McNamee.

McNamee also discussed his own personal connection to Facebook. According to McNamee, he served as a “mentor” to Mark Zuckerberg, the founder of Facebook, during Facebook’s early years, convincing Zuckerberg to not sell the business to Microsoft and Yahoo and rather seek to expand the business himself.

“I was convinced that any [social media site] who required authenticated identity had a better opportunity to succeed because you could prevent trolls from happening,” he said. “It would be a social stigma to be a bad person.”

McNamee also noted that Facebook allowed users to set restrictions on who could see a users’ posts, which he felt was a “huge advantage” over other platforms.

However, according to McNamee, Facebook’s success led to the company’s mass-use of data collection, citing specific instances in recent elections. McNamee first observed this data collection when he noticed various political memes that attacked candidates during the 2016 presidential election.

His concerns were exacerbated during the 2016 Brexit vote, where the United Kingdom voted in favor of leaving the European Union.

To McNamee, Facebook was being used to appeal to “lizard brain” emotions such as “fear and outrage, because when we are afraid and we are angry, we want to make sure other people share our fear and anger because that is what makes us feel better.”

According to McNamee, Bannon targeted “suburban white people, people of color and idealistic young people” in an attempt to “suppress” their vote by using advertisements and social media campaigns to push those groups not to vote.

Aaron Soto-Karlin, an Amherst resident attending the talk, said that he enjoyed the details McNamee presented in his lecture, “particularly with regards to how a range of actors used very targeted ads around the 2016 election.”

Stefania Patinella, another Amherst resident who was a member of the audience for the event, said that she is not a Facebook user and “never has been.”

“I’ve been thinking like this for a while. I’m kind of a skeptic about many things, and I don’t like when I feel advertised to, and I feel constantly advertised to on social media,” Patinella said. “This is like ‘Oh, finally somebody is saying things out loud that I have thought about for a while.’”