The freshman posted a three-point performance with two crucial goals 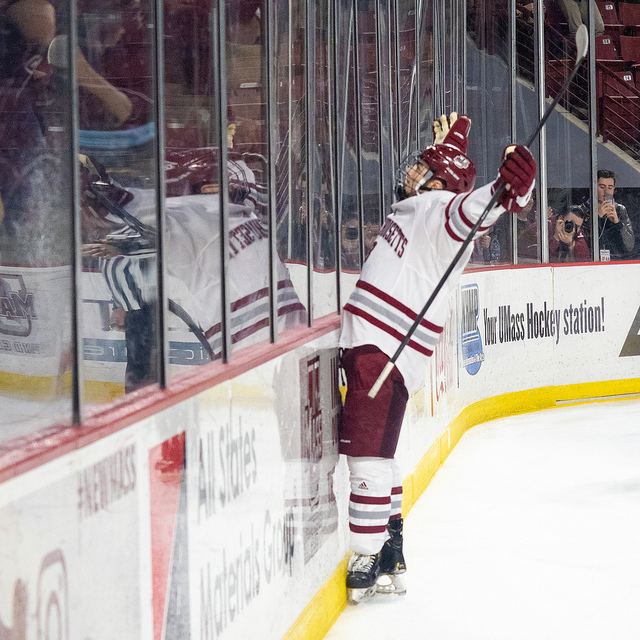 Coach Greg Carvel knows you know about Cale Makar, but he wants to make sure you know Bobby Trivigno, too.

Because the Massachusetts hockey team’s 5-4 double overtime victory over New Hampshire Friday night probably would not have happened without the 5-foot-8 forward.

“He’s probably our most important player,” Carvel said of Trivigno. “I don’t know if you guys notice, but every line he goes to, that line scores all the goals – gets all the chances. He’s the best forward on our team. He’s outstanding.

The freshman capitalized on half of his shots on goal (2-for-4), accumulated a plus-two rating and added an assist, all in Game 1 of the Hockey East quarterfinals. Trivigno has served as a catalyst all season, and he lived up to his reputation despite facing a dreadful 3-0 deficit in the second period.

Just as the Minutemen (27-8-0, 18-6-0 Hockey East Association) were about to slip into the second intermission down by three, Trivigno kept up the pressure and managed to deflect an initial shot from Jacob Pritchard off his skate past UNH (12-14-9, 8-10-6 HEA) netminder Mike Robinson 57 seconds before the horn blew.

After celebrating into the boards and receiving an energetic reaction from the 3,000 fans in attendance, Trivigno ignited a fire in the UMass roster that carried over seamlessly into the final frame. Mitchell Chaffee, who eventually scored the game winner in the second OT, considered it the most important goal of the game.

“Just getting the first one,” Trivigno said of his emotional celebration. “Honestly, I did nothing there. It just hit off of me, but it just felt really good to get the boys going.”

A minute and change into the third, Pritchard made it 3-2 on his 15th goal of the season. But not without No. 8 sending the initial feed right to Pritchard’s stick.

“I give Trivigno a lot of credit, he goes to the net-front on the first one,” Carvel said, “And Pritch is a good offensive player from the top of the circle to the net, he’s very good. He sniffs out the game, he scores that goal from the back post.

“[Pritchard] does a good job getting pucks to the net, but to me it’s really Trivigno that kick-started us.”

And even after the Wildcats put themselves up by two again off a tally from Chris Miller, Trivigno did something about it and quickly answered a little over two minutes later. The New York native crashed the crease from center ice and one-timed a pass from Pritchard to make it a one-goal game once again.

Trivigno has posted three two-goal games this season, coming against Ohio State, Connecticut and now UNH. It was also his second three-point performance of 2018-19, with the last one occurring against Northeastern in January.

He’s been a crucial, versatile player for Carvel to plug into each and every line all season long. Carvel has recognized Trivigno’s ability to make any player next to him better or provide the spark needed to finish out the game strong.

In a game where any team could’ve drowned under a 3-0 deficit before the third period, Trivigno kept the Minutemen above water.

“You have to throw rankings out the window, you need saves,” Carvel said. “You need gritty effort. And tonight Bobby Trivigno was that gritty difference in the game.”