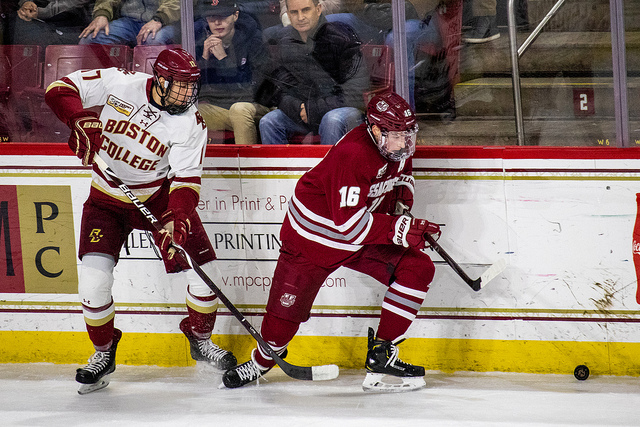 It’s late March and there’s a buzz around college hockey in Amherst that hasn’t been felt in years.

For good reason, too.

To start, the Massachusetts hockey team won its first Hockey East regular season title. Then, it hosted a quarterfinal sweep over New Hampshire. A week later, the Minutemen are set to appear in their first conference semifinal since 2007.

The last time No. 3 (26-6-0, 18-6-0 HEA) UMass had the chance to chase the Lamoriello Trophy at TD Garden, future NHLers Jonathan Quick and Justin Braun were at the front of the Boston-bound charge.

Twelve years after that pursuit to capture their first Hockey East title fell short, the Minutemen look to do what only one other UMass team has done: win the semifinal for a shot at the Hockey East crown.

Ever since the Calgary, Alberta native first threw on the sweater and took the ice at the Mullins Center in 2017, the Minutemen have transformed from a five-win team to one of the best in all of college hockey.

With a chance to advance to the finals on Saturday, only Boston College stands in UMass’ way on Friday.

“It’s pretty special,” Makar said after practice Tuesday. “This team hasn’t been there since 2007 so it’ll be cool to see all the alumni and [fans] come out in the Boston area. But, at the end of the day we’re focused on winning games and nothing’s different. We just know this team’s special and hope we can continue it.”

On Wednesday, the sophomore standout was named a Top-10 candidate for the 2019 Hobey Baker Award, given to the player that best exemplifies outstanding skills on the ice and character off of it.

With elite skating and stickhandling abilities, as well as a top-notch hockey IQ and the speed to embark on end-to-end rushes, No. 16 is the best player on the ice when he’s out there; and it’s hard to dispute.

In 70 career games donning the maroon and white, the sophomore, alternate captain, and 2017 fourth-overall draft pick of the Colorado Avalanche accumulated 67 points on 20 goals and 47 assists.

He picked up 21 of those points as a freshman and more than doubled that total in his come-back year, surpassing Brian Leetch’s 1987 Hockey East record (39) for most single-season points by a defenseman.

During the series sweep of New Hampshire, Makar was at the front and center, posting four key points.

After potting the equalizer in Game 1, which erased a 3-0 deficit, and kickstarting the Minutemen on the power play in the first period of Game 2, Makar was named Co-Player of the Week by Hockey East.

It’s his fifth weekly accolade of the season, co-owned by Eagles’ (13-21-3, 10-11-3 HEA) forward Logan Hutsko, who net a pair of game-winners in BC’s upset of Providence to send the Eagles to the Garden.

“Scoring the game-tying goal and the first goal the next night, those are big goals,” Carvel said on Tuesday. “It’s funny, we went back and looked at his line-by-line stats and the games that we lose, he’s usually a minus player and the games we win, he’s a plus. So, he always has a big impact on the game.”

Although the two-way blueliner typically wows crowds with his quick decisions and an ability to turn on the jets at any moment to jumpstart a highlight-reel play, Makar brings a lot more to the ice, Carvel said.

Just as Makar’s been on fire all season, BC hit its offensive stride against the Friars, scoring 10 goals.

Although it entered the postseason tournament as the seven seed, the Eagles still pose a dangerous threat, comprised of several experienced scorers, like Hutsko, Oliver Wahlstrom and David Cotton.

“I think the biggest thing for us is just going to be playing consistent and playing to our strengths.”

Makar, who was one of the top NCAA prospects entering college, took a chance on Carvel and UMass when he stuck with his commitment to the prior staff in hopes of doing something special in Amherst.

Safe to say, it’s worked out pretty well for both sides, so far.

“I really embrace challenges and [coming in] I knew it was going to be a challenge to turn this around,” he said. “In a certain respect I like being an underdog. It kind of makes it fun to play. When that coaching change happened, I just wanted to stay loyal and I knew they were going to get somebody good, so I wanted to wait it out and fortunately I did, because they hired three great coaches and a great staff.”

Less than two seasons removed from the 17-game losing streak that capped Carvel’s first season at the helm before bringing in Makar, the Minutemen are one step closer to completing their ultimate goal under ‘NewMass’: gaining respectability in Hockey East and securing the coveted Lamoriello Trophy.

“It’s a pretty special time,” Makar said with a smile, before disappearing into the locker room.