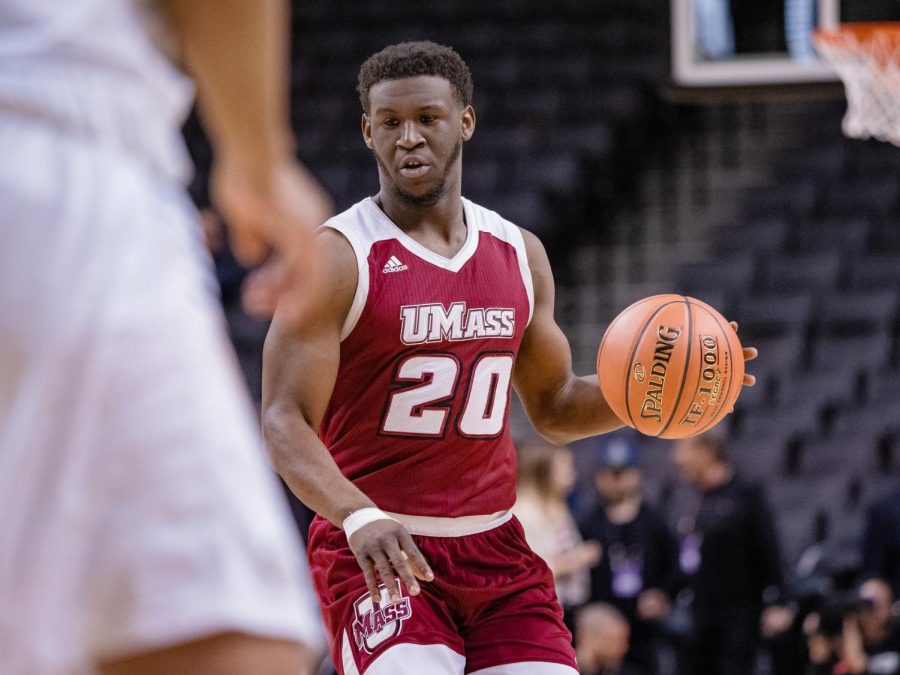 BROOKLYN, NEW YORK — Down five points with less than two and a half minutes to go in overtime, the Massachusetts men’s basketball team made one last run at a win in the first round of the Atlantic 10 tournament.

Once again, with the season on the brink, it was Keon Clergeot who stepped up for the Minutemen. His first basket, a jumper in the lane, cut the lead to three with 2:16 left and gave him a career-high 23 points on the day. But it was the second, a tough contested layup with 1:13 left after a free throw on the other end, that gave UMass (11-21, 4-14 A-10) one last chance at the win.

“We just didn’t keep playing hard,” a morose Clergeot said after the game. “But, you know, very disappointed that – how it ended.”

The disappointment was palpable for Clergeot, who finished with 25 points and directed the offense for most of the game. For a UMass team missing dynamic point guard Luwane Pipkins and top defender Samba Diallo, Clergeot was the one who picked up the slack.

It was Clergeot who led the charge for UMass in the opening minutes, hitting three shots from deep in the first eight minutes to stake the Minutemen to a 25-14 lead. Clergeot’s shooting forced the Colonials to abandon their 2-3 zone less than halfway through the first half, after it had stifled UMass three weeks before.

“They shot us out of our zone really quickly,” GW coach Maurice Joseph said. “Clergeot came out and played really, really well for them.”

UMass’ hot start faded as the first half went along and the offense started to stagnate, and Clergeot was shut out until halftime. In the second half, he hit a three with just under fourteen minutes remaining to stave off the Colonials’ comeback and finished with 10 more points.

“We come out there to play hard at the beginning,” Clergeot said. “But then we just really came flat at the second half.”

In the end, Clergeot shot 44 percent while everyone else combined for 32 percent, hit five of UMass’ eight threes, and, on a day when the Minutemen went just 10-22 from the line, Clergeot hit four of five. On the other end of the floor, he turned in a typically strong defensive performance as the Minutemen held GW under 60 points in regulation.

But the moments that may have meant the most to the Minutemen were the ones where he slammed into the ground after a layup, or nearly tumbled into the seats under the basket trying to save a ball from going out of bounds. After a trying conference season that led coach Matt McCall to repeatedly question his team’s effort, Clergeot exemplified a motivated, invested UMass team that just didn’t execute well enough to pull out the win.

“He’s always played the game with such a chip on his shoulder and such passion,” McCall said. “I was always adamant when he wanted to come here after he decided to leave Memphis – not necessarily because he’s a talented player, but it was more about that [passion], and we need more of that.”

But that passion wasn’t enough on Wednesday afternoon.

On the final play of regulation, with the game tied, Clergeot ended up with the ball coming out of a UMass timeout. With confusion in the UMass offense, Clergeot heaved up a desperation three with a hand in his face, but just like his career day, it fell just short.