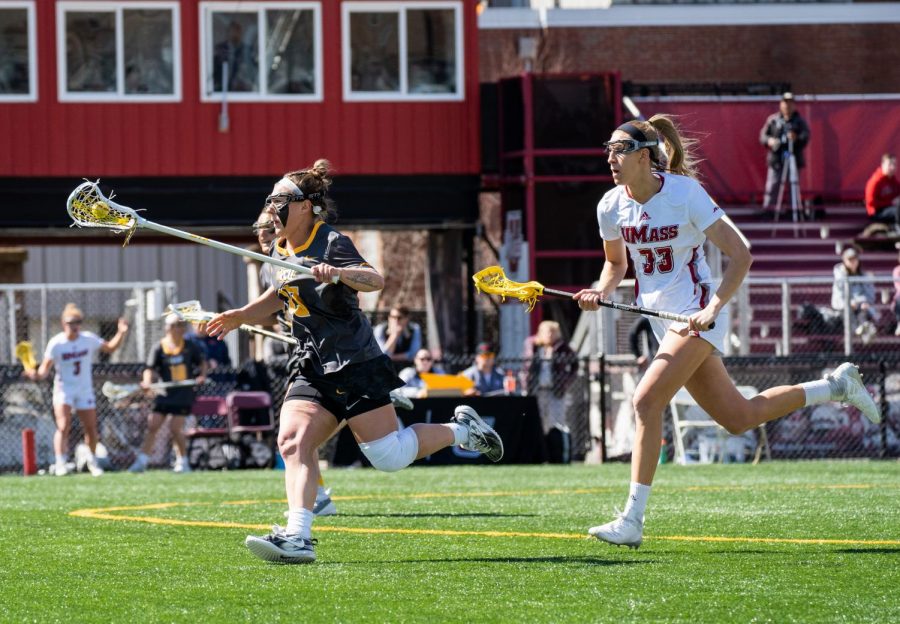 In 2018, the Massachusetts women’s lacrosse team only lost one game during Atlantic 10 play. It came at the hands of the Virginia Commonwealth, which the Minutewomen defeated handily 22-14 on Sunday.

Now, UMass (7-3, 2-0 A-10) looks ahead to Friday’s matchup against George Mason. That game will be the second leg of a three-game homestand for UMass, which rounds out on Sunday against Saint Joseph’s on Garber Field at 1 p.m.

Against VCU, Stephanie Croke and Kaitlyn Cerasi were among the leading scorers, providing eight and seven points respectively. Senior Kiley Anderson also drove the attack against VCU scoring four points, but it was on the draw where Anderson’s impact was most felt. Anderson won 16 draw controls, an area that has become a focal point for this team as the Minutewomen emphasize holding possession over their opponents.

“If we can put ourselves in a position where we’re winning that possession game, I think against anyone that we play, we can have a lot of success,” coach Angela McMahon said.

Like UMass, George Mason is yet to be defeated in conference play, and will be looking to slow the offensive onslaught the Minutewomen have sprung on their opponents in their last two games. Against Davidson and VCU, UMass scored 42 goals, with 31 coming in the first half.

For the Patriots, sophomore defender Natalya Moody will be leading the charge in stopping that attack. Moody has 14 caused-turnovers so far this season.

“I think George Mason has always been a tough game for us – very competitive – and I think they’re well coached and put a lot of passion and effort out there on the field when they play,” McMahon said. “If we can just buckle down coming off this weekend, honing in and even improving on, you know, whether it’s draws or ground balls and 50/50 opportunities, that’s going to be our main sticking point.”

Junior goalkeeper Lauren Hiller, in her second game back from injury, made the start for UMass against VCU and finished with a win after allowing 10 goals and making four saves.

“We’re really happy Lauren’s back playing,” McMahon said. “Again, going back to her leadership and what she brings in her communication, but also just how she carries herself. She’s just sort of a leader by example, and some of that I think everyone on our team responds too.”

For the Patriots, Deanna Balsama has been that leader by example. With at least one goal in every game this season, Balsama leads George Mason with 38 points on 26 goals and 12 assists. Balsama is one half of a pair with Chachi Kelehan, who has 33 points on 24 goals, that leads the Patriot offensive attack.

All season, the Minutewomen have had an emphasis on ball control and trying to limit turnovers so they can win the possession battle.

“I want to see an improvement on unforced errors,” McMahon said. “We can’t give another team that’s talented – as talented as George Mason – an opportunity to have the ball, when they’re not forcing that. If someone’s going to make a play, we want to make them work for it.”

Friday’s matchup with George Mason is set for 3 p.m. on Garber Field as both teams fight to stay undefeated in the A-10.

Cameron Sibert can be reached at [email protected] or followed on twitter @cameron_sibert.