Matt Gaudet scored the game-winning goal in OT for Yale 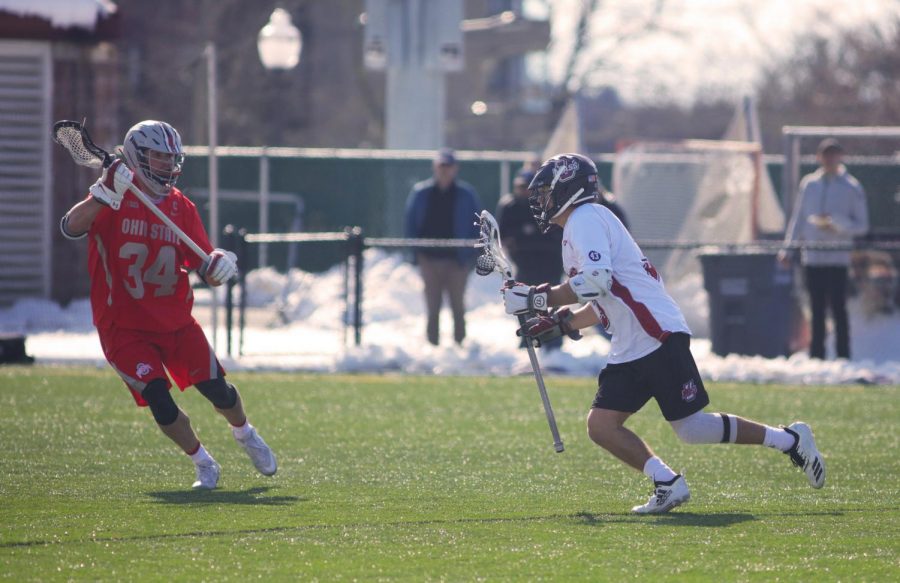 NEW HAVEN, CT–There must be something about 11-11 games that go to OT that just doesn’t agree with the Massachusetts men’s lacrosse team. After falling to Army 12-11 in OT in its season-opener, UMass fell just short of upsetting No. 4 Yale on Saturday, losing 12-11 after a hard-fought contest.

After FOGO Tom Meyers came up big and won the overtime face-off, UMass (1-3) had multiple opportunities to seal the deal, but Yale (2-1) hung tough on the defensive end. With 54 seconds left in OT, Brian Tevlin fed an open Matt Gaudet at the front-left of the crease, and the junior stuck it in the net, giving Yale the 12-11 win.

UMass came out to a roaring start and was up 4-1 at the end of the first quarter, thanks to two goals from Ben Spencer, one from Jeff Trainor, and another from Billy Philpott. The Minutemen’s midfield group led the way in the scoring department, responsible for eight of the team’s 11 goals on the day.

“They did a nice job on our attack in terms of scoring, and our middies were able to score,” said head coach Greg Cannella. “They would slide to them, we told them ‘keep working, try to get underneath them.’ Jeff did it a couple of times, Ben did it early, Billy did it, and their opportunities went in the cage.”

Each team scored two apiece in the second quarter, with the score 6-3 UMass going into the half. Meyers played Yale’s TD Ierlan fiercely, coming up with five of 11 face-offs in the first half.

The UMass defense was stifling through two quarters. Yale went only 1-4 on man-up situations in the first half. Minutemen goalie Sean Sconone played out of his mind, making three saves during a two-minute long man-up window for the Bulldogs in the second quarter which saw Yale get numerous open looks to score.

“Those guys—Jack Suboch, Isaac [Paparo], and Sammy [Eisenstadt]—those guys are great,” said Sconone. “They got my back, I got their back, but we got to make their team play a full 60 as a team. We were so close.”

As has been an issue all year, though, the Minutemen faltered in the third quarter. Not five minutes into the second half and UMass had scored twice, with goals from Scott Del Zotto and Devin Spencer. The Bulldogs then proceeded to score four unanswered, finding success by going lower with their shots on Sconone, and the UMass lead was cut to one going into the fourth quarter.

After a left-handed Gabe Procyk rocket found the back of the cage with 7:57 to go, Yale ripped off three unanswered goals, and things looked bleak for the Minutemen.

Yet, with less than a minute to go, Jeff Trainor took matters into his own hands, twice diving left through traffic to punch in shots right at the crease, and the game was sent to overtime.

“The first one, I felt the poles were kind of shading me top side, so I was able to go underneath and kind of pump the scrape there and was able to get out in front,” said Trainor. “And then the second one was the same thing. Benny had the pole deep…and I was able to take the alley and do almost the exact same thing.”

The Minutemen have a quick turnaround in schedule, with the team traveling to Albany on Tuesday for what will be its second game in four days. After that, UMass will head south to NJIT next Saturday to wrap up its four-game road stretch.