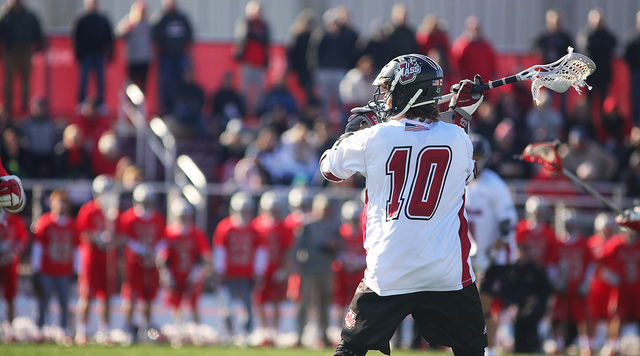 With its dominant 14-8 win over Albany on Tuesday, the Massachusetts men’s lacrosse team looks as if it’s beginning to hunker down and play with better consistency.

A poor third quarter plagued UMass (2-5) last Saturday at Yale, but the Minutemen turned in a much better third quarter against Albany, scoring five goals to lead Albany 10-6 going into the fourth.

In the third, UMass had three more shots on goal, came up with six more ground balls, and won 5-7 face-offs. The Minutemen were only assessed one penalty in the quarter after being assessed three in the third against Yale.

“I think we just kept playing,” said head coach Greg Cannella. “Fortunately for us, we were able to score the ball, and that’s what the difference in the game is. You don’t score and you put a lot of pressure on your defense.”

Goaltender Sean Sconone continued to block seemingly everything that came his way against the Great Danes, chipping in 16 saves.

“The shots get easier for me as we move on throughout the season here, they get better,” Sconone said. “They get comfortable with each other—Jackson, Isaac and Sammy. They get more comfortable together. Coach Mac puts in a great game plan, so the defense stays tight and we keep outside shots. I do my job, those guys do their job.”

Cannella believes Sconone’s terrific play has had a reassuring effect on the rest of the defense.

“When you play in front of a guy like that…people play more relaxed, because they know if they slip up, if they make a mistake, that Sean has their back,” Cannella said. “We don’t want them to play uptight, feeling like if their guy gets an inch, it’s going to be a goal.”

Coming off a tough match up with arguably the best FOGO in college lacrosse in TD Ierlan, Tom Meyers had an uplifting day against Albany, securing 19-26 face-offs.

UMass continued to show improvement on extra man opportunities, going 2-3, while also stifling its opponent on man-ups (Albany went 0-5). Part of that success can be attributed to Albany simply missing the cage on their opportunities, but it also had to do with UMass “staying out of the box for the most part,” according to Sconone.

“We worked on it during the week. We had two days to prep, so it was just mano y mano, pretty much…our guys got their sticks up and did a good job,” he added.

One minor weakness for UMass in the Albany game, however, was that its short-stick defensive middies were beaten or run over on drives on a few instances, setting up goals.

The “shorties”—as they’re referred to by most coaches and players—are typically already at a disadvantage in one-one-one situations. So, the defensemen must be ready to slide quickly to make up for a possible slip in coverage. Thus, communication is critical.

“It’s a unit, so once one guy gets beat, we all play on a string,” Sconone said. “Everyone just rotates around it and [if] guys do a good job of communicating, then we’ll be good. If we don’t communicate, then we’ll get bad situations.”