UMass knocked out of Hockey East Tournament by BC

UM fell 3-0 to the Eagles inside TD Garden 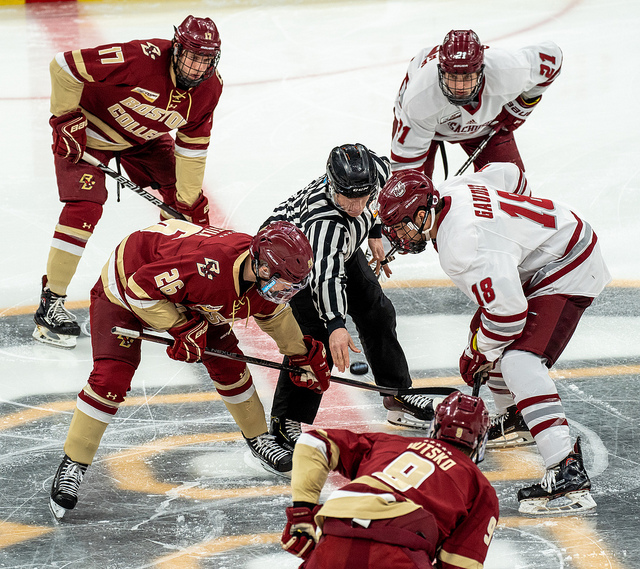 BOSTON – It was an uncharacteristic night for the Massachusetts hockey team.

The Eagles advance to play Northeastern in the championship matchup Saturday.

The Minutemen had a difficult time controlling the pace of play as BC dominated most of the puck possession and offensive opportunities throughout the night. Despite outshooting the Eagles two out of the three periods, UMass couldn’t generate anything offensively.

“Full credit to Boston College. They looked like a team playing with a purpose tonight,” coach Greg Carvel said in the postgame press conference. “With desperation and the appropriate enthusiasm for a game of this magnitude and my team just wasn’t. Very discouraging. It was a big opportunity for our program and honestly, it was one of the poorer games we’ve played this year.”

Cale Makar led the Minutemen with six shots on net, while Mitchell Chaffee chipped in five. Filip Lindberg stopped 29 of the 31 shots he faced, earning the lone compliment from Carvel in the press conference.

It took both teams a handful of minutes to adjust to the arena’s atmosphere, with the pace of play not picking up until around six minutes were left in the first. Jack Suter put up the Minutemen’s best chance all period after Chaffee sent the initial shot on BC netminder Joseph Woll.

But David Cotton sent UMass into the first intermission down one after capitalizing on a wraparound and flipping the puck over Lindberg’s right shoulder with 12.3 seconds left before the second.

“A big part of it was how well BC played. I thought they had a very strong game plan,” Carvel said. “They competed hard and we didn’t. And again, there are not many nights this year that I can say we got outcompeted.

UMass found itself in a tough spot after Jake Gaudet and Brett Boeing were called for penalties seconds apart, and the Eagles went to work with the 5-on-3 man-advantage. Just as the penalties expired, Lindberg robbed Julius Mattila with a swift shift to the other side of the cage to swallow the potential two-goal deficit.

At the 15:22 mark, UMass earned its first power play of the night. But poor passes and a lack of urgency prevented the Minutemen from generating any signs of life.

A few minutes into the final period, the Minutemen looked to have tied the game at one but a quick whistle from the referees deemed the play over.

UMass earned another man-advantage opportunity at the 8:26 mark but could barely generate a shot on goal throughout the entire two minutes. It didn’t take much longer after that for the Eagles to make a two-on-one rush, that ended with Chris Grando putting the puck in the back in the net.

Carvel pulled Lindberg with around two and half minutes left in the third, but Mattila managed to register the third and final tally of the night on the empty net.

The Minutemen continue their postseason next weekend in the NCAA tournament.