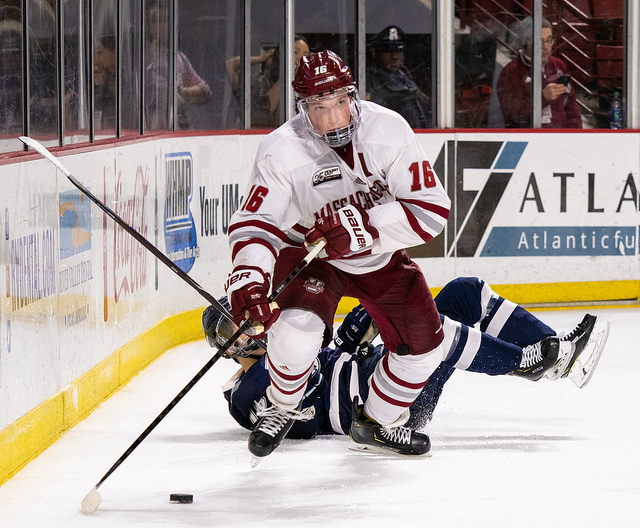 The game was all but decided before the horn could even sound to mark the end of the first period.

After battling back from three goals down against New Hampshire to pull out a 5-4, comeback victory in double-overtime on Friday, the Massachusetts hockey team made things a lot easier on itself in Game 2.

Leading up to the 6-0 win, Mitchell Chaffee, who ended Friday’s thriller in double overtime, said No. 3 UMass had to learn from its goalless start in Game 1 to have a successful Game 2; and it did in a big way.

“The first goal is so important,” coach Greg Carvel said after the win, sending the Minutemen to their first Hockey East semifinal at TD Garden since 2007. “It’s usually the team that’s ready to play that scores the first goal and then that just carries through the 60 minutes. We were ready to go tonight.”

“I think we just wanted to come out with a little extra oomph in our game,” Makar added. “At the end of the day, I think we were a little lazy at the beginning of the first period on the first night, but today we really focused on just being able to come out and really force them to make plays towards our systems.”

Makar got UMass going with the crucial first goal of the night less than five minutes into the first period.

Setting up behind Mike Robinson (5 saves) in net, Pritchard sent a pass to Marc Del Gaizo positioned at the blue line, who slid a pass over to Makar that the sophomore snapped into the net for a 1-0 lead.

After Trivigno buried his third of the series to extend the first-period lead to 4-0, Robinson was pulled.

“That’s a big boost when your power play can go out there,” Carvel said after the win. “That’s one of the more effective PKs that we’ve dealt with this year, so when they make that nice tic-tac-toe play and Cale snaps it into the back of the net, that’s a real boost. Especially after last night when it took us almost 40 minutes to score, to score that quickly into the game, our bench got juiced up pretty much off of that.”

As if scoring four goals in the first wasn’t enough, the Minutemen did it after Friday’s marathon thriller.

“The 85-minute game last night, I think that played to our favor,” Carvel said of the team’s bounce back effort. “I think as a road team it’s hard to recover when you’re not at home, so that was an advantage for us. But we were able to solve [Robinson] pretty quickly tonight and that was extremely beneficial.”

According to Carvel, being at the helm of a group that knows what needs to be done and what it takes to continually find improvements – like focusing on the first goal – is extremely beneficial as a head coach.

“This is a wonderful time of year because your players are completely locked in,” he said, “and they have been all year. This group’s outstanding. Just how easy it is to coach them. So, I’m excited. I’m really excited we’re all going to get rewarded with this experience that this program hasn’t had in 10 years.”