Minutewomen gear up for A-10 women’s basketball playoffs

UMass is out for revenge against George Mason 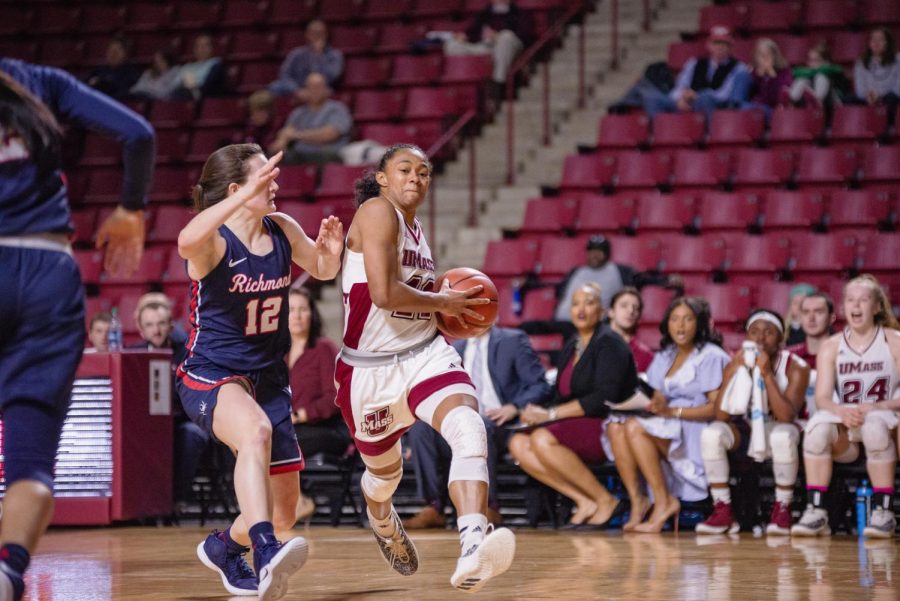 The Massachusetts women’s basketball team begins its quest for a championship in the Atlantic 10 playoffs on Tuesday with a matchup against George Mason.

The main theme of this one for the Minutewomen? Revenge.

Back on Jan. 16, in their only matchup of the season, UMass was trounced by the Patriots 70-52 at Mullins Center.

“The last time we played them, we did not play well whatsoever,” said coach Tory Verdi. “We didn’t execute offensively; we didn’t execute defensively. It was quite disappointing.”

Four different Patriots turned in double-digit performances in that game, highlighted by Nicole Cardano-Hillary with 22 points. She also leads the A-10 in scoring with 20.4 points per game.

“We just have to play really hard against her,” said Hailey Leidel. “Contest every shot; don’t let her get the easy looks that a lot of players like that tend to get throughout a game. Just making her earn every point.”

Verdi said that the Minutewomen hope that containing Cardano-Hillary will slow down the high-flying Patriots’ offense.

George Mason also has guard Jacy Bolton, who ranks second in the A-10 in rebounds per game with 8.9. Although the Patriots only pulled down two more rebounds than UMass in the first matchup, Verdi said that the Minutewomen would be focusing on toughness around the basket.

“We have to contain the dribble penetration, we have to box out and rebound,” Verdi said. “I felt that they just out-toughed us the last time we played and I thought they did a great job of executing offensively, and we have to be a bit more disruptive defensively and we can’t allow them to execute their sets.”

In that January loss, they only put up 14 points in the opening quarter and were down by seven at the beginning of the second, a deficit from which they never recovered. That one quarter is part of a much larger problem for the Minutewomen that they hope to quell on Tuesday: coming out slow.

“We definitely acknowledge it as a team and you can’t really help it,” said Leidel of her team’s struggles early in games. “No matter what, even in our last couple of games, making sure we know that it’s okay. Even if we come off to a slow start, making sure everyone’s still focused and focused on defense still and not letting them get hot. Just keep running our offense the way we know we can — don’t get pressured and don’t get overwhelmed.”

Verdi had a very different answer.

“We’re not going to start off cold this game,” he said. “We’re going to get off to a great start.”

For Bre Hampton-Bey and other Minutewomen, this game will have some special spectators in the crowd who could provide the extra motivation to come out on top.

The Minutewomen enter Tuesday on a two-game winning streak, but prior to that, they had dropped four straight. Despite the inconsistencies, the Minutewomen remain confident they can continue the upward trend.

“I think this is our time where we’re really focused,” Hampton-Bey said. “If we keep being consistent by coming into practice with a lot of energy and it just carries over to the game, we’re starting to get that consistency he’s looking for.”

At the end of the day, the Minutewomen are eager to get a second chance at beating the Patriots.

They’ll get that opportunity on Tuesday in Fairfax, Virginia. Tip-off is slated for noon.

Evan Marinofsky can be reached at [email protected] followed on Twitter @emarinofsky.