‘Mercy, compassion and kindness:’ UMass community comes out in support of Muslim community after the Christchurch attack 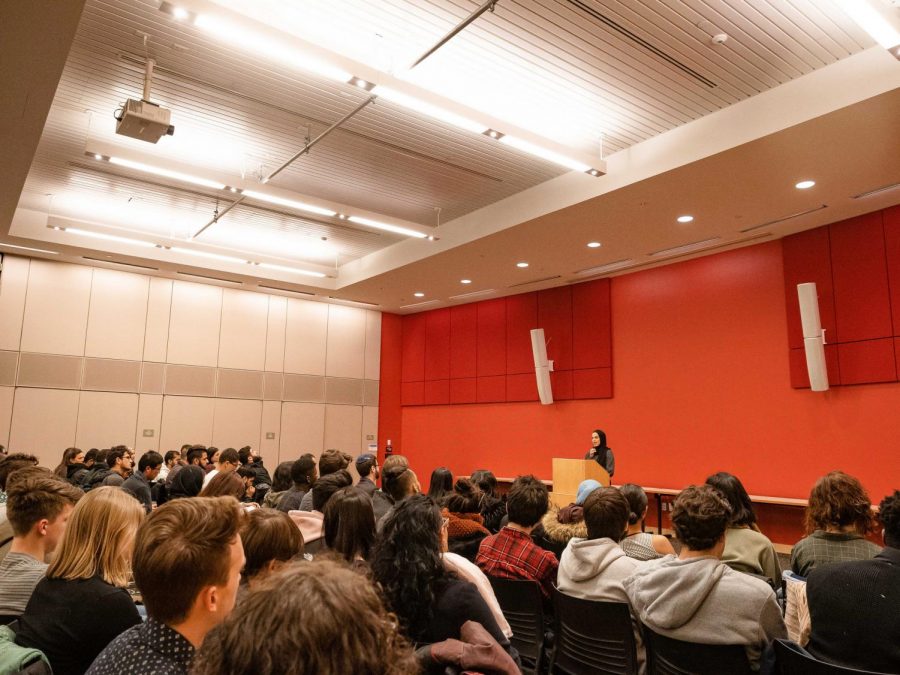 Following a terrorist attack on two New Zealand mosques last week, a vigil held in solidarity with the Muslim community filled almost every seat in the Commonwealth Honors College on Monday night.

The University of Massachusetts Muslim Students Association organized the event, and the group’s co-president, Sana Gilani, greeted them all.

“Assalamu alaikum wa rahmatullahi wa barakatuhu” – May the peace, mercy and blessings of Allah be with you, too – Gilani said.

The vigil commemorated those whose lives were lost, but also to “come together as a community to pray and cope with this tragedy affecting our Muslim brothers and sisters worldwide,” according to the event’s Facebook page.

The MSA came up with the idea for the remembrance on Friday night. By Saturday, the club had managed to secure a room.

At 7 p.m., the event began with speeches from members of the Muslim, Christian and Jewish communities, as well as Students for Justice in Palestine, the Interfaith Opportunities Network and the UMass administration.

Gilani, a senior electrical engineering major, told the attendees that the event was about more than this specific shooting; that it was about people being murdered for being Muslim and, more broadly, about Islamophobia.

“It is horrific and unfair,” Gilani told the crowd. “But this is what hate can do.”

She added, “I don’t want my fellow MSA members to stand up here again.”

MSA Co-President Raya Husami, a junior biochemistry and molecular biology major, then spoke the names of some of the lives lost. She spoke about 71-year old Daoud Nabi, who died while greeting the shooter into a mosque with “Hello, brother.”

“I could not imagine welcoming someone in my place of worship and be responded to with deep hatred,” Husami said.

Husami ended her speech saying that the Muslim community will continue to be “unapologetically Muslim” and practice “mercy, compassion and kindness.”

Junior engineering major Nabeel Areiqat spoke next. Citing verse 2:214 from the Quran, he encouraged the audience not to be deterred by hate.

“We should not be afraid to go any houses of worship, even though anyone who has hate wants us to be,” Areiqat said.

He then thanked all non-Muslims in attendance for showing their support and “solidarity.”

Yasmine El-Kattan, a freshman engineering major, shared an early experience of Islamophobia in the United States.

El-Kattan recalled a moment when she was nine years old in a store where she felt that “all the eyes” were upon her. When she realized that it was because she was wearing a hijab on her head, she asked her father if she could remove it.

“No, don’t take it off,” El-Kattan remembers her father saying. “You’re representing Islam…Welcome them with open arms.”

Nora Cameron, as a representative for SJP, called for an end to white supremacy.

“It strips us from an unjust world,” the senior public health major said.

Rabbi Aaron Fine, executive director of UMass Hillel, stated that the attack was “an affront to not only Muslims, but all good people and the soul.”

According to the MSA co-presidents Fine was one of the first people to send an email after the attack.

Fine urged the audience to stand in power and define humanity “in good news and generosity.”

Due to an out-of-state visit, Chancellor Subbaswamy was not in attendance. His Chief of Staff, Rolanda Burney, spoke in his place.

Burney said that Subbaswamy condemns all forms of hatred.

“We add our voice to those worldwide who reject hate,” Burney said.

Amar Paratha, a UMass alum, said that he appreciated this event because, “when events like this [the Christchurch shooting] happen, the focus can be on the tragedy, but the positive of the communities coming together [at this event] is also important.

“When something like this happens, you feel alone…but seeing the support here, it means a lot,” Paratha said.

The event ended with Maghrib, the sunset prayer.