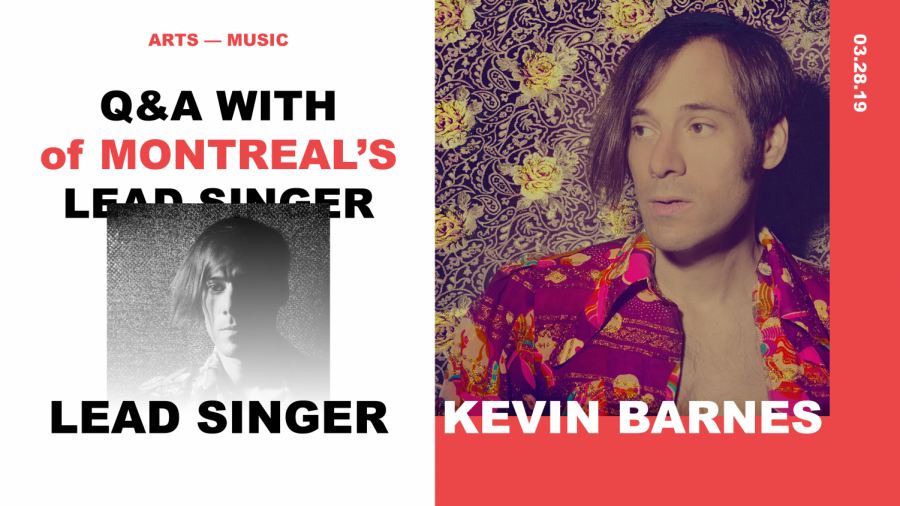 Psychedelic pop band “of Montreal” has gone places that few bands have before. Led by iconic front man Kevin Barnes, the Athens, Georgia band has released a total of 22 albums spanning their 23-year career. Launching his career in the Elephant 6 collective, a recording company that included indie rock pioneers Neutral Milk Hotel, Barnes has proven himself to be innovative and original throughout his career. He has worked with Solange Knowles, Janelle Monae and MGMT, along with various other artists, either producing for or crafting songs with them. of Montreal will be performing at the Pearl Street Nightclub in Northampton on April 13.

Matt Berg: This is your second tour in one year, and it seems like you’re always doing something, whether it be touring or making music. How many times have you been to Northampton on tour?

MB: What makes you want to come back here, being such a small city with small venues?

KB: Well, we try to hit as many places as possible, we don’t take days off or anything. When you find a place that is friendly and enjoys your music, you stay loyal to it. I like the city, I think it’s got a good vibe, it feels like a pretty progressive place.

MB: You’ve created more music in two decades than most musicians do in their whole lives. With 15 studio albums and multiple compilations, how do you do it? Where does the inspiration come from?

KB: I guess I just find it endlessly challenging and fulfilling to try and create new things, and I never really feel that satisfied with the albums that I’ve made after a couple months. It just feels good and, for whatever reason, I’m organically driven to keep producing more songs, so yeah, I can’t really say, it’s just my life’s passion.

MB: You’ve created this alter-ego named Georgie Fruit. Who is he? How did you create this character?

KB: In the past, I’ve had other alter-egos that I use as song writing devices or just different ways to get into a different headspace when I’m working or performing. And the Georgie Fruit character was basically a way for me to step outside of my personal life at that time, which had become very intense psychologically and difficult. So, I wanted to create this alter-ego that was more light-hearted and more, sort of, like a party boy.

MB: Do you feel that performing as Georgie helps you perform better, or express yourself better? How is he different than Kevin Barnes?

MB: Your newer songs, notably “It’s Different for Girls,” boldly take on social issues. What caused you to take this more political path?

KB: I guess, for whatever reason, I just moved more in that direction of becoming more woke, or more conscious of my contemporary moment, you know? And wanting to write things that were more universal and more relatable.

MB: In the song “Plateau Phase/No Careerism No Corruption,” you mention how you can hear the government “breathing” if you put your ear to the ceiling. You also talk about being in a simulation and the concept of a multiverse. Do you believe that we’re in a simulation, or that the multiverse theory is true?

KB: It’s really hard to say. It’s hard to have conviction in that kind of belief because it’s impossible to prove. So, it’s just like a sense maybe. I’ve kind of resigned myself to not knowing, not being able to really put my finger on exactly what existence is or what reality is. But, you know, these are the questions that people grapple with internally, so I don’t really expect to be the one human that figures it out.

MB: What do you hope your fans take away from your music?