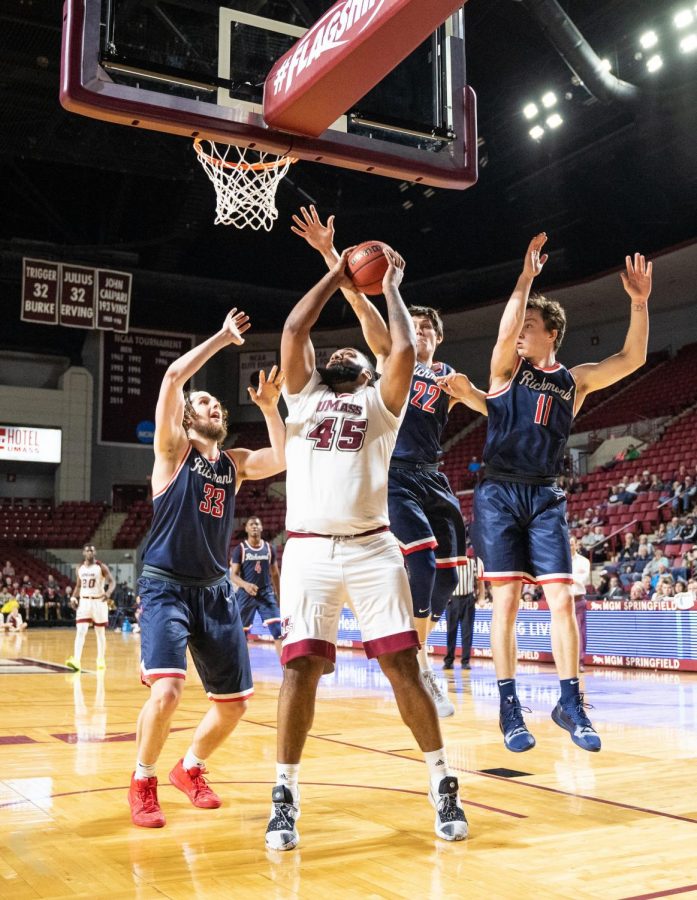 Rashaan Holloway’s time at UMass has been a mixed bag.

On some nights, the big man looks like the most dominant player on the court, using his menacing size to bully opponents in the post.  Other nights, though, he has simply disappeared.

Wednesday was the latter.

Holloway arguably saved his best game for his final appearance at the Mullins Center, as the graduate senior capped off his senior night with a career-high 28 points to lead the Minutemen to victory over Richmond.

“I had [senior night] on my mind, but when I’m in the game, I just want to win the game,” Holloway said. “We needed a win, it happened to be on senior night and it gave me a little extra motivation to go hard for my team and win.”

The Elmer, New Jersey native had it going early and often, scoring back-to-back baskets in the opening three minutes to give UMass the early lead. He showed an array of post moves throughout the night, using his uncanny athleticism and strength to get easy baskets in the post.

His strength was on full display, getting to the free throw line four times in the game.

Not only did Holloway have it going from the field, but he was also feeling his touch from the charity stripe. A 47.5 percent free throw shooter on the season, Holloway went 4-for-6 from the line to add to his impressive night.

“For Rashaan to go out that way and really dominate the game from start to finish the way he did, I thought was terrific,” UMass coach McCall said. “I thought our guys knew the ball needed to get inside. That was something we talked about before the game.”

While the fifth-year senior had it going offensively, he was also a force on the glass, pulling down 12 rebounds, six on the offensive end, to help give the Minutemen a 20-rebound advantage over the Spiders.

Going up against Richmond big man Grant Golden, listed at 6-foot-10 and 265 pounds, Holloway was given an opportunity to go against another big who was willing to play physical in the post.

It was a matchup he relished, as he would win the game in the paint, going 12-for-17 from the field.

“I liked that matchup,” Holloway said. “It gave me an opportunity to play and use moves against somebody just as big as me and him not fall all the way back and I get offensive fouls. It was fun. The refs let us play and it was a good game.”

Holloway capped off his night with an emphatic dunk on a 2-on-1 fast break, leaving the backboard rocking as he has so many times in his UMass career.

During the flow of the game, Holloway did not realize he had a career high, or the number of shots he had taken.

“Sometimes I get into the game, I don’t realize that I touched the ball that many times or scored as many points as I did,” Holloway said. “It just happens through the flow of the offense. Once I score, I have to get back on D, so there’s no time to really think about how I got that bucket, I just have to keep working to get new ones.”

For players like Jonathan Laurent, who finished with 20 points, having Holloway going in the paint opens things up, as the Spiders were forced to collapse their defense to stop him, leaving shooters open on the perimeter.

“When he’s playing like that, best player in the country, best big in the country,” Laurent said. “You got to focus on him. Them starting to double team, back rotations, late rotations gave me my chance to get some open shots, some layups here and there. Definitely need him to play like that every single game he can.

When Holloway plays like he did tonight, UMass has a chance against anybody in the A-10.