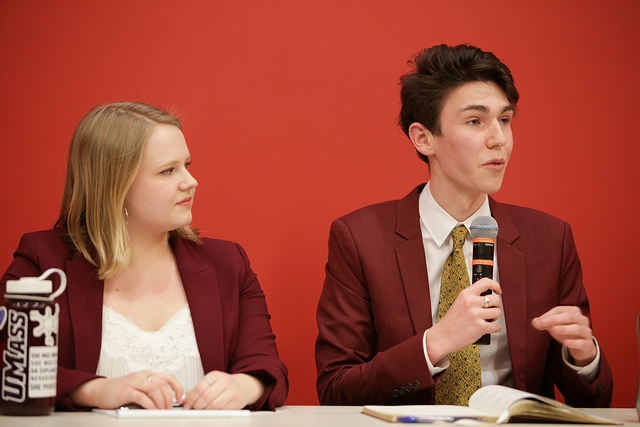 The Student Government Association at the University of Massachusetts passed a motion to ratify the results of the 2019 Spring Elections on Monday, March 18.

On March 4, the senators voted to table the motion to give the Elections Commission time to review additional evidence of campaign violations. A new reviewed report included 22 new campaign violations from several candidates, though none were considered severe enough to disqualify any candidates.

Three of the new campaign violations were allegedly committed by presidential candidate Timmy Sullivan and his running mate Hayden Latimer-Ireland. The commission ruled as if the elections were still ongoing and determined the Sullivan/Latimer-Ireland ticket would have received a three-hour suspension per violation. Including previous suspensions issued to the ticket, the Sullivan/Latimer-Ireland ticket would have been suspended for 39 hours out of the 72-hour election cycle had all the violations been filed during the election period.

Prior to the ratification of the report, presidential candidate Allie McCandless and vice presidential candidate Moksha Padmaraju filed appeals with the SGA judiciary on the decisions made by the Elections Commission regarding certain campaign violations. Following Monday night’s meeting, McCandless called the election “illegitimate” and referenced “illegal tactics and an avalanche of misconduct.”

“This election will forever be a stain on the reputation of the SGA, which is already held in incredibly low regard by students due to its inadequate leadership,” McCandless added.

In the end, the motion to ratify the elections report passed by a two-vote margin. The passing of the motion caused Unger to resign from his position.

“I resigned the moment the Senate voted to ratify the 2019 SGA election. This election exposed large flaws in our election system,” Unger said in a Facebook post. “Our system had a safeguard to prevent this election from going through. The Senate could reject the ratification of the election, and move to recast the ballots. The Senate failed their duty tonight.”

Chad Cordani, a political science sophomore, also showed disappointment in the SGA, but for a different reason than the election.

“Universities were created to promote freedom of thought and the denial of Mr. Cullen from the SGA undermines everything that Universities and liberalism in a true sense represent,” said Cordani. SGA Speaker Ryan Mahan said he could not comment on why the body denied Cullen, a political science sophomore, a seat as senator.

Two other students expressed regret that the SGA denied Cullen a seat as senator during the meeting, citing that they believed he was denied a seat due to his “Republican ideals.” Cullen also wrote a letter to the editor of the Collegian talking about his confirmation hearing.

To finalize the meeting, senators passed a motion to “recognize a professor for exceptional use of free and open materials in their courses,” to encourage other faculty members to do the same.

Leticia Medeiros can be reached at [email protected]