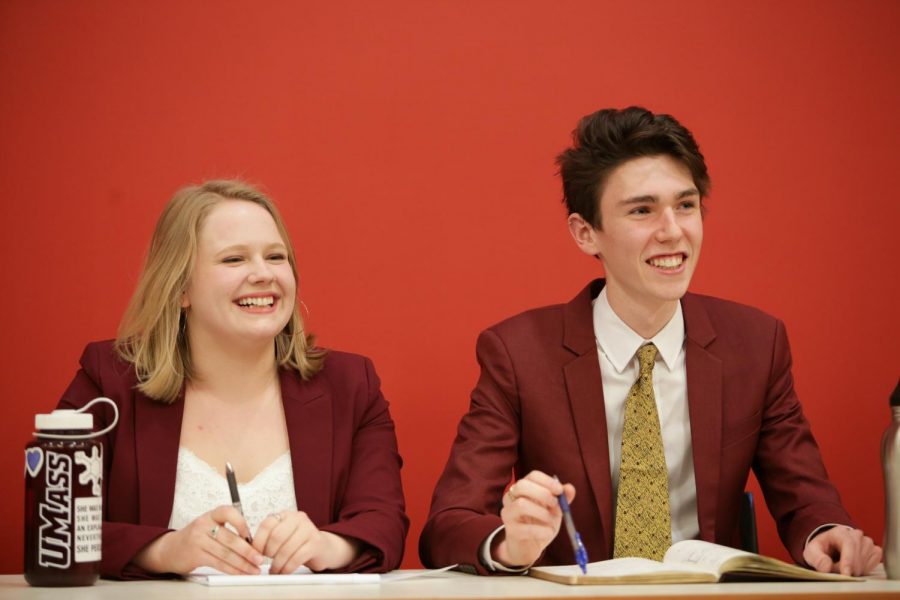 Two weeks ago the Sullivan/Latimer-Ireland ticket edged out a victory by 12 votes. The final elections report maintained the original vote results, with Sullivan and Latimer-Ireland receiving  1,523 votes, 40.8 percent of the total vote and the second-place ticket, Allie McCandless and Moksha Padmaraju, receiving 1,511 votes, 40.48 percent.

Phill Cross, the chancellor of the elections commission, wrote in an email that “after working with [their] legal counsel,” the commission found that in the absence of a majority victory, a winner could be chosen by plurality. They plan to discuss the issue more in Monday’s SGA meeting prior to senate vote on the ratification of election results.

Sullivan, in a private Twitter exchange after the release of the report, said that he and Latimer-Ireland were “incredibly excited to have earned the trust of the campus to continue leading on the very important and real issues that our students struggle every day with.”

“We are so incredibly proud of our team and all the time and soul they put into making this grassroots campaign a success,” he said.

However, McCandless said that her team “[does] not concede this election,” referring to the “numerous violations documented in the report.”

Additionally, she and Padmaraju have filed a petition for a ruling with the SGA judiciary on the matter.

The violations McCandless referred to were six out of 11 complaints that came in after the conclusion of the election, delaying the announcement of the results.

“After reviewing these complaints, the Commission determined that violations had occurred; however, the violations were not severe enough to warrant an invalidation of candidacy or the nullification of all the election results,” Cross said.

The six complaints included in the final elections report were all reported by McCandless concerning campaign activities of the Sullivan and Latimer-Ireland team.

One complaint, stating that the Sullivan/Latimer-Ireland ticket used a “CEPA GroupMe Chat,” a texting group under the control of the Center for Education Policy and Advocacy, for campaign organizing, would have resulted in a formal warning for the team if acted upon during the election, not impacting the ability to continue their campaign.

However, the five other complaints, if reported earlier, would have resulted in three-hour suspensions of the campaign, totaling 18 hours of suspensions. One incident resulted in two suspensions, as it involved unapproved material being distributed during a suspension, a double violation of the bylaws. As a result of previously reported complaints, the Sullivan/Latimer-Ireland team was suspended for 12 hours. If all suspensions had been issued during the campaign, the team would have been prevented from campaigning for a total 30) hours out of a 72-hour election cycle.

Out of the complaints that would have resulted in suspensions, two concerned residential assistants who sent out messages to their floors campaigning for the Sullivan/Latimer-Ireland ticket. Two complaints concerned social media; on Feb. 20, materials for the team were “shared on social media by non-[Registered Student Organizations]” and on Feb. 21, the “Nat & Timmy” Facebook page, which was created for Sullivan and his former vice-president, shared a link to the approved “Timmy and Hayden” page.

The final complaint took place on Feb. 21. Latimer-Ireland posted in a Moodle discussion page encouraging her classmates to vote for her and Sullivan.

“There is no doubt whatsoever that these violations made all of the difference in an election with a margin of only 12 votes,” McCandless argued.

When asked about the complaints, Sullivan commented that he thinks “generally” that “[SGA] bylaws need to be restructured in a way that is more conducive to grassroots campaigns.”

“I think current practice can be discouraging to people’s right to freely vocalize support for their candidate if that support (whether something as simple as ‘please vote for X!’) needs to be ‘registered and approved,’” Sullivan said.

In an interview on Thursday afternoon, prior to results being released, McCandless said that the delay of results “might be a blow” to the “legitimacy of the SGA.”

“I think anytime there’s a contentious election…whenever something goes wrong with an election, it obviously impacts the ability of the government to do work,” McCandless said. “It’ll be hard to [rebuild] trust in the SGA. There’s already been a lot of issues this year with people resigning and not seeing it as a body that can do as much change anymore, so I do think that’s going to be a big issue.”