To the SGA: Stop fighting over scraps

We all have a role 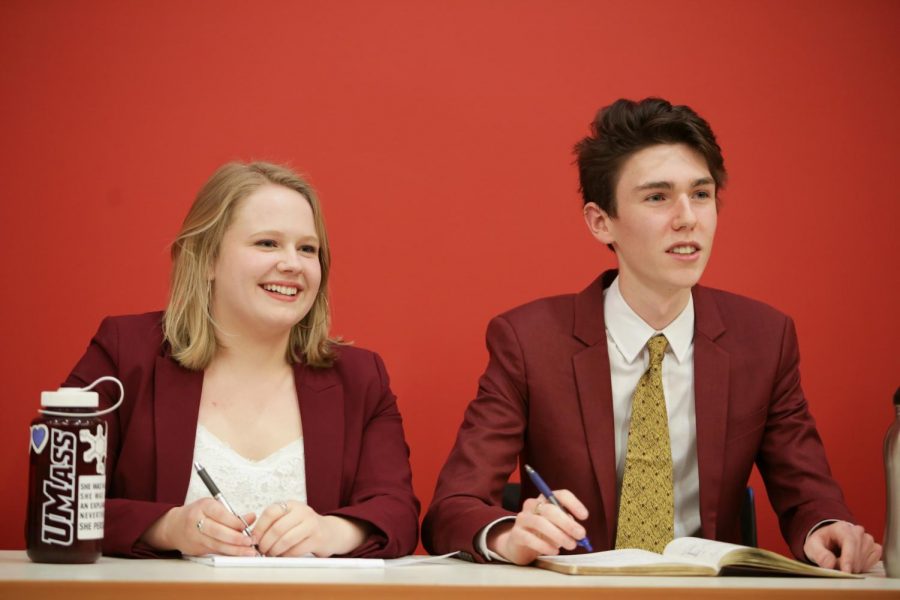 One close election and divisive debate later, the presidential ticket with Timmy Sullivan as president and Hayden Latimer-Ireland as vice president was ratified last week despite unreviewed campaign violations. One senator, Aron Unger, resigned in protest, claiming that “the Senate had failed their duty” to reject ratification.

Yet in all the hand-wringing, no one is bold enough to offer solutions. Allie McCandless, who received only 12 fewer votes than President-elect Timmy Sullivan, called the election “illegitimate” due to the winning ticket’s “illegal tactics,” but has hardly made a case to disqualify Sullivan outright. Sullivan, meanwhile, argued that the bylaws are too stringent and not “conducive to grassroots campaigns,” but is not in a position to make such a change.

The Student Government Association could not have made any choice but ratify the results of the election. Invalidating Sullivan’s campaign would have been unprecedented – at the council meeting on March 4, SGA Advisor Lydia Washington insisted that “the commission stays in warnings and suspensions, unless it’s something totally egregious.” That happened in 2014, when a candidate made a violation and, according to Washington, “did not tell the truth” to the council and was reprimanded before the voting period was over, leading to some bylaw reforms. Passionate voices on both sides make any new precedent unethical. Going forward, reforming our bylaws again is the easy answer.

It doesn’t feel easy, though. Otherwise simple debates have become placeholders for the divisive issues of our time like affordability and protecting our voice. We are hung up on counterproductive fights about what we can’t – or shouldn’t – change. To progress, the SGA and student body need to recognize our common challenges, cease the drama and stop blaming each other for campus issues that require our constructive unity.

The top two campaigns undoubtedly cared about affordability. In interviews with The Massachusetts Daily Collegian, Sullivan and Latimer-Ireland discussed their role in building coalitions with on-campus food access programs, while McCandless and Padmaraju discussed improving access to financial resources for registered student organizations and making SGA meetings more connected to the needs of students.

The Student Union renovation, meanwhile, has become a wedge. The McCandless/Padmaraju ticket was on the offensive, pointing to the report that the renovation is $12 million over budget and how the student government hasn’t been able to stop it. McCandless called the students’ move to Bartlett “a mess” in their interview. In fact, as an employee of a student business formerly occupying the Student Union, I would have to agree. Not only is the cost disconcerting, but the social fabric of the campus was disrupted in the confusion of the move.

That being said, this is an issue between students and the University of Massachusetts, not the SGA. Sullivan is not culpable for the University’s inefficiency, and his involvement as president is hardly a reason to argue such a claim. What would it look like for him to control the cost? Tell student groups participating in the development of new spaces ‘no’? Drafting a cheaper site plan? Tell the University to stop building? Clearly, it is the University that owes the student body an explanation for these added costs.

Behind this frustration seems to be a feeling that approving the renovation was a bad idea. But given the lack of space and the presence of asbestos in the former Student Union, I suspect a renovation would have been imminent anyway, so the opportunity for students, RSOs and student businesses to be involved in the design of the new location has been valuable. While it is valuable for the McCandless/Padmaraju platform to bring this to the forefront, college affordability is bigger than one of several construction projects the University faces. It is a national issue – one that will intensify as smaller colleges, like our neighbor Hampshire, falter because of a lack of funds while enrollments for existing colleges continue to rise.

I also see much frustration emerging from the way the SGA administration has handled issues with the University. In particular, President Sullivan has participated in protests at the Board of Trustees meeting, including one where he called Chairman Robert Manning “grossly uninformed” for saying there was not a “student debt crisis” in the country.

The truth is, there is no right way to deal with issues with UMass. Diplomatic relations should be the norm, but when the SGA does not seem to be fully utilizing its powers, or bureaucracy takes too long to solve problems, we need to know when to put our feet down. Consider when the Collegian office was almost unnecessarily taken away by the University, prompting a letter to the editor that rallied Collegian supporters action. Alumni and students were outraged. “Within hours,” a follow-up editorial read, “the newsroom was ours again.”

So putting pressure on institution works. It’s not the only thing we’ve tried, either. It may seem like a hot mess today, but once the Student Union opens, I believe that it will be a testament to negotiation between the University and students for the greater good. Many students, myself included, will not be able to fully enjoy these changes. Still, anyone who has a passion for any student groups on campus can appreciate how this will affect the next generation of UMass.

So, how should the SGA proceed? For one, the number of resignations is out of hand. Policies that require more commitment within the council will allow it to challenge the notion that it is sitting on its hands. More, it will encourage the president to better accommodate some of the critiques his administration received regarding campus-oriented projects.

Secondly, the feuding parties’ division can be leveraged to have a legitimate debate about election reform. What caused the elections commission to overlook a piece of evidence in a violation allegation? How much does it take for a campaign to be disqualified? What is the difference between coalition-building among RSOs and unfairly exploiting their resources, and how can we make those rules clear? These are questions that should be addressed long before the next election.

In the meantime, we need to move on from this election and work together on college affordability and making our voices heard. Those violations might have made a difference in the election, yes. But we are not dealing with extreme cheating or fraud. Unclear rules led to this controversy, and they will persist until we pursue reform. In the meantime, we have bigger fish to fry when it comes to making this campus more inclusive, safe and affordable.