Touri: UMass had its chances, but handed itself an A-10 Tournament exit 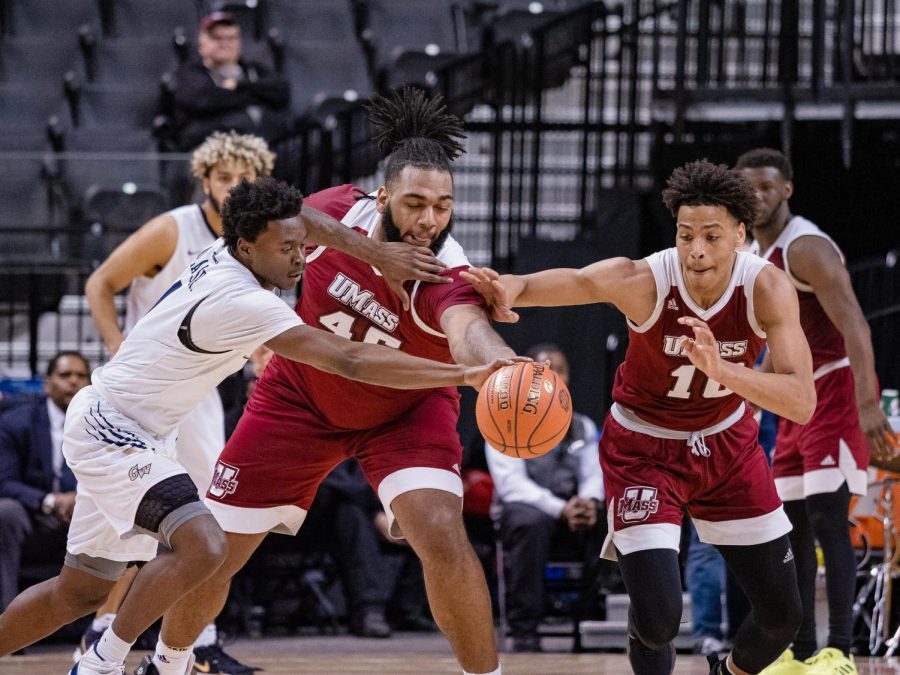 BROOKLYN, NEW YORK — It seems rather fitting that one of the most frustrating UMass seasons in recent memory would end so frustratingly.

The Massachusetts men’s basketball team saw its season come to an end on Wednesday after a 68-64 loss to George Washington in the first round of the Atlantic 10 Tournament. And if we’re being fully honest, the Minutemen (11-21, 4-14 A-10) beat themselves.

They had their chances. They really, truly did. UMass jumped out to a 25-11 lead early in the first half and it seemed like the start of a great performance — Keon Clergeot and Carl Pierre were hitting, Rashaan Holloway was a wrecking ball underneath and the Minutemen were getting stops on the other end time after time.

So imagine how frustrated Matt McCall was at halftime when the Colonials (9-23, 4-14 A-10) outscored his team 18-5 over the final 12:48 of the first half, and a 14-point lead dwindled and dwindled until it was just a one-point gap.

The thing is, it’s not like GW went on some big run; giving up 18 points in 13 minutes is perfectly fine, that comes out to 28 points in the space of a half which I’m sure McCall would be happy with.

But how do you score 25 points in seven minutes, and five in the following 13? How do you open the game shooting 10-of-13, then follow it up by hitting five of your next 29?

That was the sort of game it was for UMass. The Minutemen could’ve put it away then and there, they could’ve kept building that lead and gone into the half up 20, or at least up double-digits, or at least more than a single point.

The Colonials didn’t play well. They just didn’t. Their zone didn’t work early and they weren’t exactly stifling in man-to-man, they shot 31.3 percent from the field for the game and 23.5 percent from three. But they capitalized on offensive rebounds, they capitalized on bad free throw shooting — the Minutemen went 10-of-22 from the line — and hit their own, and they stayed in the game just long enough for Terry Nolan Jr. to make the difference late.

Despite blowing the early lead, the Minutemen still had chances. Up six with 10 minutes to play, and with a chance to open up a comfortable lead, UMass gave up three offensive rebounds on one possession before Justin Williams hit two free throws to cut the lead to four. Next possession, another offensive rebound sent Justin Mazzula to the line and he cut it to three. Sy Chatman takes a bad three, Javier Langarica hits a wide-open jumper, and the lead is suddenly down to one.

UMass had another six-point lead with just under six minutes to play that vanished by the 2:20 mark, Chatman stepped out of bounds on a crucial possession in a tie game with 1:22 to go, and nothing quite summed up UMass’ afternoon — and its season — like the final play of regulation.

UMass had a side out after a timeout with six seconds to go — the Minutemen stacked up, Pierre left early while the referee yelled at Mazzulla over his defense on the ball, Tre Wood just seemed a bit lost — he was actually quite good on Wednesday, bar this play — and Clergeot caught it on the right wing, wasted about five seconds while everyone tried to figure out what the play was, and then he hoisted a wild three at the buzzer that missed badly.

And even after all that, UMass still — still — had chances to win the game.

Down two with 11 seconds in overtime, Pierre drove right and got fouled and went to the line with a chance to tie it. He missed the first, and the Minutemen were forced to foul in the final seconds, and just ran out of time.

I struggle to blame Carl Pierre for anything because he’s been UMass’ best player this season full stop. He willed the Minutemen to huge wins against Providence and Davidson, he bailed them out against Saint Joseph’s and Rhode Island at home, and he was often the lone bright spots on some of the team’s toughest days this season.

But with 11 seconds to go, the Minutemen got one more opportunity to keep their season alive, and the opportunity passed them by.

On Wednesday, the Minutemen beat themselves. They’ve beat themselves all season. Howard, Harvard, Temple, La Salle (twice), St. Bonaventure, Fordham — you get the idea, and you can add George Washington (twice) to the list.

McCall was fairly dejected on Wednesday, but he spoke more about the program than he did the game — McCall knows there are some changes to be made, and he intends to change them.

“It’s a huge summer for us to become a real team, a connected team,” McCall said, “where everybody is pulling and everybody is rooting for each other.”

“This is the most important summer since I’ve been here, as a head coach, for our program going forward. And it’s time that this program takes a huge, huge step forward because we’ve been getting knocked back and getting our teeth set in, and it’s time that we march forward.”

I’m not ready to slaughter McCall yet — there was a lot of turnover where he took over and I don’t think the the right group of guys, though many people have (fairly) pointed out that most of these guys, aside from Pipkins, Holloway and McLean, are his guys. Guys he recruited, either out of high school or transfers.

Most college coaches get three years to prove something. McCall’s first year was tough, but promising. His second year was, for long stretches, a bit of a disaster.

So on to year three we go. McCall will try and get the right guys into the program this summer and do what he can to get the wrong guys out. He’s talked plenty about culture, and I imagine that’ll be his sole focus between today and the first week of November, above defensive coverages and offensive sets and the free throw shooting that killed UMass on Wednesday. Truthfully, I still believe that with the right guys, he can still get it done.

The next few months will make or break McCall’s tenure at UMass, and there’s no shortage of work to be done.

Year three is everything for McCall, and it’s going to be a long summer.