UMass baseball opens A-10 play against VCU this weekend 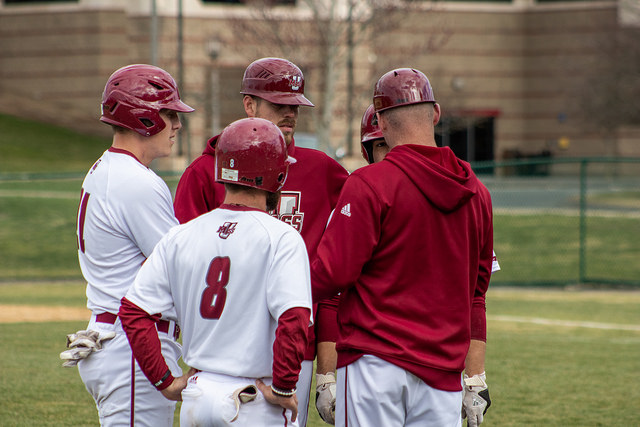 The Massachusetts baseball team looks to open Atlantic 10 play this weekend when it travels to Richmond, Virginia for a three-game set with Virginia Commonwealth.

With its struggles of late, UMass enters A-10 play with its focus fixed on one place.

“They’re a really good program in all aspects,” said head coach Matt Reynolds of VCU. “I think right now we need to focus a little bit more on ourselves right now, making sure we’re doing everything that we need to do. That’s where we’re at right now.”

The Minutemen have every opportunity to do so. For the first time in two weeks, they had a practice day on Wednesday as well as a lift.

“I think it’s a good chance to go over some things,” said Reynolds of practice days. “There’s still things that we need to add to our team in terms of different plays that we have purposely not got to yet. I think really today has to be a refresher course on a lot of different things that if you don’t go over them for an extended period of time and don’t come up in a game, they can get away from you.”

There are certainly things to clean up. Over the six-game skid, the Minutemen have been outscored 75-24.

Fortunately for UMass, it’ll have ace Justin Lasko pitching Friday to help get the squad back on track.

“Lasko has proven that he’s going to give us a chance to win every time,” Reynolds said. “We always feel good about going out there on Fridays with him. Hopefully he’s going to be a bit sharper than he was the last two times out. It wasn’t his best but still competitive and he still gave us a chance to be in the ball game which that’s the good thing with him.

“Even when he’s not at his absolute best, he’s going to give you a chance to win which always makes you feel good about heading into a series on Friday.”

On the offensive side of things, UMass has been underwhelming thus far. Their team batting average is at .251 with an on-base plus slugging of .698, both near the bottom of the A-10. The power hasn’t been there and neither has the contact. Reynolds believes that his team’s main form of attack won’t be their offense.

“If we’re going to win these games, it’s probably because we’re going to pitch well and play defense and win by a run or two or three,” he said. “It’s going to come down to execution and making sure we take advantage of the opportunities we have. I don’t think that our expectations should be we go into VCU and boat-race them. It’s just not going to happen, probably.”

One bright spot on the offensive end has been sophomore Anthony Videtto, whose .375 batting average is the best among all Minutemen. His OPS of .941 ranks him second only to senior Alec Norton.

“I think he’s doing a nice job for us,” said Reynolds. “He’s been pretty consistent the whole year so far which has been great to see. I think that he’s going back to what he’s done in the fall, post-fall and pre-season and he’s made some physical adjustments in his swing that have really helped him out a lot. He’s been doing a nice job of getting himself good pitches to hit.”

Even more surprising has been Videtto’s emergence from his role last year to the one he has this year.

“He’s been a huge plus for us offensively,” Reynolds said. “Of course, with Cooper Mrowka going down at first base, [Videtto’s] done a great job of not only filling that but I think he’s hit every single game for us in the four-hole. That’s huge to be able to just add somebody that was a non-factor in your lineup completely the previous year and all of a sudden, he’s in the four-hole every day. That’s a huge plus for us.”

The Minutemen travel to Richmond, Virginia on Friday. First pitch is slated for 6:30 p.m.