Minutemen looking to turn things around after rough start 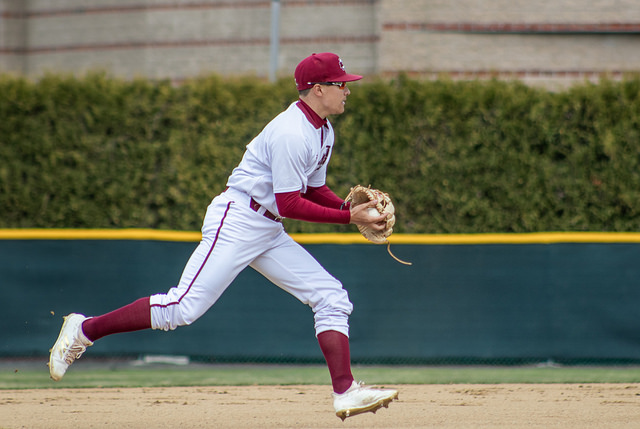 The Massachusetts baseball team will be looking to end a 10-game skid this weekend when they travel to Ohio to take on Dayton.

UMass coach Matt Reynolds is looking forward to the opportunity of getting back in the win column.

“This is a weekend where if we’re gonna get back on track in the A-10, we got to look to get two [wins] here,” Reynolds said. “If we could get two on the road here against Dayton, that would be good. Certainly, a sweep is difficult to do but we got to try to get two this weekend; get ourselves back on track.”

The Minutemen (4-13, 0-3 Atlantic 10) squandered a 5-3 lead to Albany late in the game on Tuesday before losing, 7-6. Reynolds is hoping that those kinds of games are a thing of the past.

“We’re all fed up with kind of giving games away and not being competitive,” said the second-year head coach. “There were things that we were doing that we can absolutely control and have nothing to do with the talent gap or anything like that. We just weren’t playing our best.”

Although the Minutemen have struggled at times, first baseman Anthony Videtto has been a bright spot on the offensive side of things. So far this year, he’s hitting .306 with a .419 on-base percentage.

“I think honestly just getting quality at-bats off their pitchers is a big key for us,” Videtto said about the upcoming series. “I think if we can get guys on base, if we can move guys over, if we can execute with runners in scoring position, I think we’ll be fine.

“A-10’s are obviously a little more serious but I think if we have the same mindset for every series — A-10, non-conference — I think we’ll be in a good spot,” he added.

The Flyers (10-11-1, 2-1 A10) are in the midst of a two-game winning streak coming off victories over Saint Louis and Kent State. Sophomore right-hander Sean Harney and the rest of the UMass pitching staff are hoping to slow down the Flyer’s offense.

“I feel like we’ll continue to compete as best we can,” Harney said. “I think the freshmen are starting to get adjusted and I think everyone’s gonna step up this weekend and I’m confident in how we’ll do.”

“I don’t think much has to change. We played a very good VCU team in our first Atlantic 10 series. We challenged them every single game this past weekend so if we bring the same mentality, I think we’ll be successful.”

Reynolds reiterated Harney’s comments about the mentality and the confidence level of the team.

“Our guys just got to go out there with that attitude that we’re gonna get it done and that we expect to win,” Reynolds said. “We started playing better in the VCU weekend which is something we needed to do, which was great. We just haven’t gotten the results just yet. Hopefully we can get some ‘Ws’ this weekend.”

First pitch is scheduled for 3 p.m. this Friday in Dayton.

Ethan Nash can be reached at [email protected] and followed on twitter @ethan_nash15.