Minuteman lose two out of three in Texas 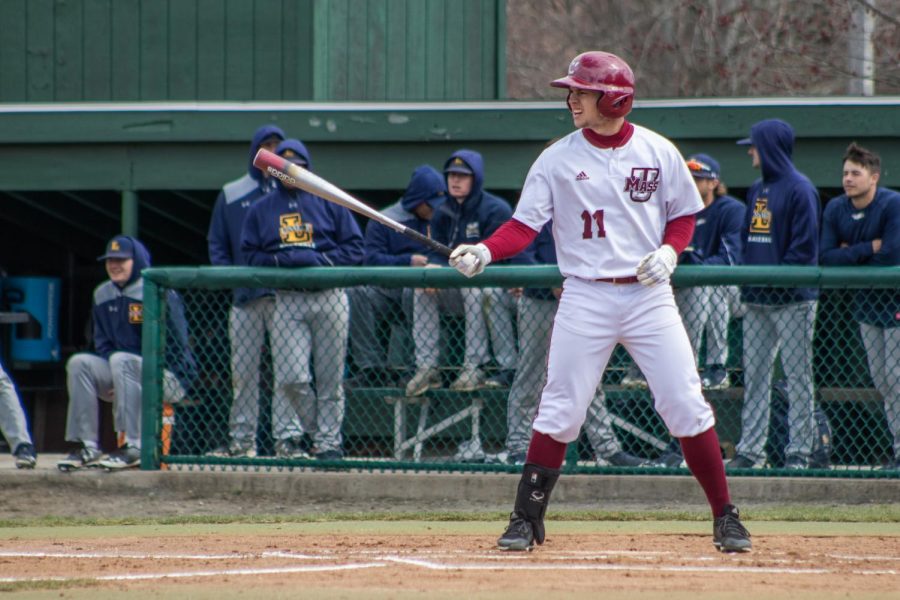 After back to back loses in the Rio Grande Valley, the UMass baseball team came out with a win to avoid being swept in the weekend series against the University of Texas Rio Grande Valley on Sunday. The Minutemen (4-3) came out on top after a slugfest of a game with the Vaqueros (11-5) which saw both sides scoring double digits in the run column. The win moved UMass back above .500 overall.

Coach Matt Reynolds was pleased with the team’s performance on Sunday after struggling to get things going on Friday and Saturday.

“It was really good to salvage something from the weekend; that’s something we talked about before the game,” said Reynolds. “I think we’ve really got some good momentum offensively, we’re grinding out every pitch.”

The Minutemen avoided the sweep on Sunday with a victory, winning 14-11 in a back and forth contest which saw both teams struggling to find consistent pitching, while Logan Greene had himself a day going 2-for-5 with 5 runs batted in and a home run as well. Reynolds alluded to the consistency from Greene which has helped this team out.

“He’s been really solid the past couple games at the plate, and he’s a really tough out right now. Even his outs he is forcing guys to make plays,” said Reynolds about his senior.

Despite going 1-for-6 at the plate, catcher Connor Smith had the loudest hit of the game with a grand slam in the top of the second to start things off for the Minutemen. UMass continued its dominance at the plate putting up six runs in the fourth and tacking on four more from the seventh to the eighth. UMass ended the game winning 14-11 to take the last game of the series.

“It was a really good example of how good he can be,” said Reynolds about the righty. “His ceiling is so much higher as he continues to get more and more refined here. He’s going to have a lot of success.”

UTRGV’s starting pitcher Trevelle Hill continued his dominance going seven innings allowing only one earned run, which gave him the win. Both sides struggled to get ahead offensively with pitchers from both teams limiting the opposing offense to only four hits apiece all game. The Vaqueros put up two runs in the seventh to pull away and win the game 4-1.

Friday night saw a close game come down to the wire all the way until the bottom of the eighth. Senior Justin Lasko got the ball for the start, and only went four innings allowing six runs — five earned — and giving up eight hits. Reynolds credited UTRGV for its offensive showcase from Friday to Sunday.

“We faced a pretty good offense and they did a nice job staying on some balls,” said Reynolds. “[Lasko] was pushing his changeup and didn’t have command of that……nothing to worry about as far as I’m concerned.”

The Minuteman saw themselves tied up at six runs a piece Friday night up until the eighth inning, when the Vaqueros pulled away sending 10 men to bat and plating six of them. The 1-2 combo of Andy Atwood and Anthony Gomez at the top of the lineup for UTRGV combined for six hits and six RBI’s to lead the way for the team.

Sophomore Luke Oliphant had a day at the plate finishing 3-for-5, with a key double and contributing three RBI’s. The contest was close throughout the game, but it was the explosive eighth inning from UTRGV that sealed the win for the hosts with a final score of 12-6.