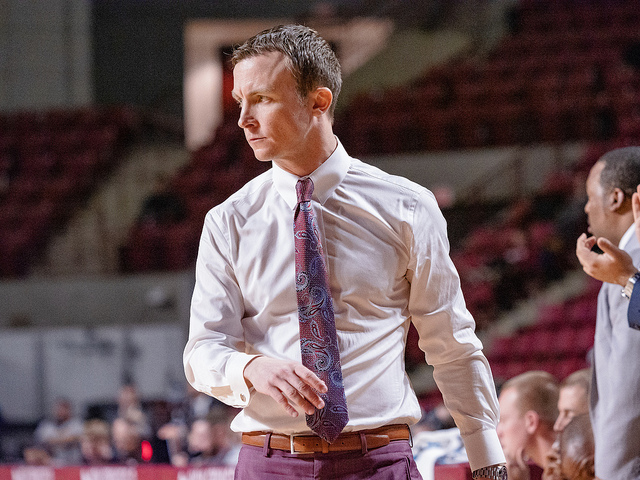 KINGSTON — If Wednesday was fairly encouraging, Saturday was extremely concerning.

Four days after one of its best performances of the season, a Senior Night win over Richmond, the Massachusetts men’s basketball team was embarrassed from start to finish by Rhode Island on Saturday, falling behind by as much as 31 late in the second half en route to a 94-75 blowout loss on the road.

“Really disappointed with our intensity, with our energy, with our effort,” said UMass coach Matt McCall. “I told them yesterday, because I think a lot of times, whether it’s fans or whoever, always curious as to why’s this guy’s starting, why’s that guy starting, why’s this guy not starting — I told our guys yesterday before practice that I was going to start the five guys that brought tremendous effort, brought tremendous energy in practice, the five guys that were out there on the floor to start the game had unbelievable effort, energy, positivity in practice, and we rolled with that group.

“With that being said, turnovers really, really killed us in the first half from a basketball standpoint, I just didn’t feel like we had the intensity level that we needed to win a game on the road, and that’s been, at times, a theme. At times we’ve had it, at times we haven’t.”

The first half turned into an endless cycle of bad passes and easy layups, with URI leading by 29 at halftime, though the lead ballooned to 31 on multiple occasions.

“It’s always come down to effort and energy, and I don’t think we were the team with the higher level of effort or energy, and it showed,” said sophomore Carl Pierre. “Rhode Island came out and played a great game, hats off to them, but we have to come out stronger.

“It was definitely us. We had 14 turnovers [in the first half]. At some point I don’t think it comes down to what they’re doing, it’s just us.”

Cyril Langevine was the main beneficiary of the turnover parade, scoring 12 points on 6-of-6 from the field — half post layups going to his right, half easy fast break dunks — while Fatts Russell’s 14 points led all scorers at the half.

They were the lone bright spots in UMass’ worst performance of the season, as Pierre led the Minutemen with 21 and Clergeot went 4-of-8 from 3-point range to add 16 of his own. The two were also among the only Minutemen who were consistently engaged defensively, as the Rams put on an offensive clinic.

Russell’s 27 led all scorers, while Langevine finished with 21 for URI. As a team, the Rams shot 77.4 percent from the field in the first half, and 68.4 percent for the game. They finished 52 points in the paint, 29 points off of turnovers, and 25 on the fastbreak, doubling UMass’ totals in the first column and more than quadrupling the Minutemen in the other two.

“Just the turnovers, they had 22 points off our turnovers [in the first half], we can never get our defense set, they just came down and were taking layups,” McCall said. “They shot 77 percent from the field, I mean that was all turnovers, those were all layups, there were no jump shots that they made until we decided to go zone.

“It was pretty frustrating.”

The final score was overly generous for the Minutemen, who made some buckets in the final 10 minutes to make the final tally more respectable. It was a thorough beating to cap off a difficult regular season.

“There’s a lot of things I got to look at once we’re finished here, but, keep fighting keep competing,” McCall said. “I was proud of some effort in the second half, out of certain guys I didn’t think there was any level of quit.

“It’s disappointing, I sound like a broken record from the ownership standpoint but I do [own it]. Stranger things have happened. We’ll go to Brooklyn, five games, five days. I’ll pack five shirts, five ties, couple suits, some workout gear for daily runs, and I’m going to play the group out there on the floor that plays the hardest, the next three days, plays with the most passion, plays with the best effort, plays with the best energy.”

The Minutemen will head to Brooklyn this week for the Atlantic 10 tournament as the No. 13 seed, where they’ll open the competition against No. 12 seed George Washington at 1 p.m. at the Barclays Center.