UMass left nine runners on base 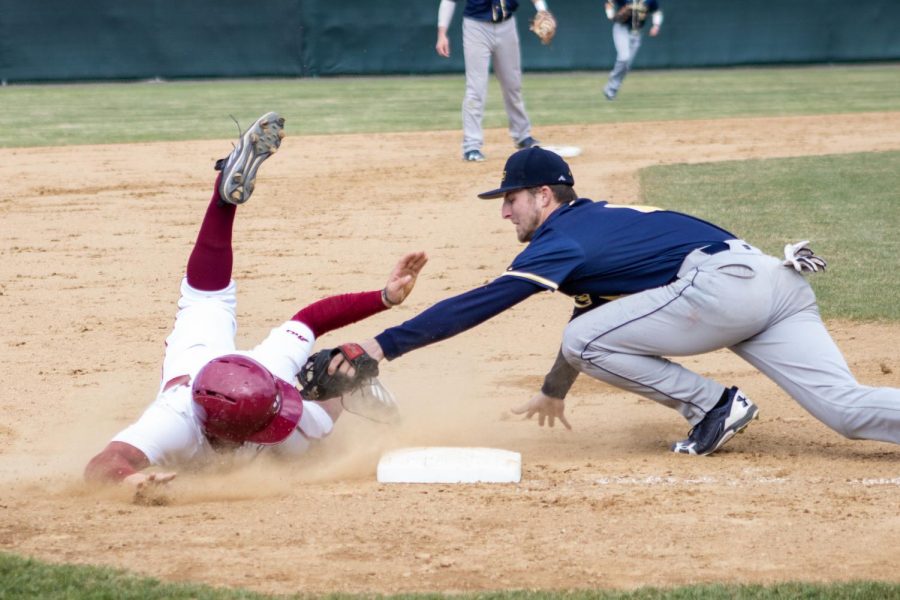 In the top of the ninth inning, tied at five runs apiece, the Massachusetts baseball team surrendered back-to-back home runs to give Albany the lead and ultimately the game, falling 7-6.

“It’s a disappointing loss,” head coach Matt Reynolds said. “We had the lead for most of the game and we just gave it away.”

Albany (7-11, 1-2 American East) nearly gave the lead right back in the bottom of the ninth, loading the bases with one out. UMass only managed to push one run across in the frame though, leaving two runners on base to end the ballgame.

“We needed one more hit there, and we didn’t get it,” Reynolds said. “We got ourselves down two and couldn’t really just play for one there in the ninth.”

Clinging to a 5-3 lead in the top of the eighth inning, UMass called upon Jack Steele to help escape from a no-out, bases loaded jam.

The right-hander almost succeeded, retiring the first two batters he faced before walking in a run and allowing the game-tying run to score by hitting Albany right fielder Marc Wangenstein with a pitch.

The Minutemen jumped to a 2-0 lead in the first inning and added two more runs in the third inning thanks to a Nolan Kessinger home run. The home run was one of Kessinger’s two hits and drove in two of his four RBIs.

Albany starter Daniel St. Clair struggled through his 2.2 innings of work, surrendering four earned runs on six hits and a walk. The rest of the Great Dane pitching staff picked up the slack, allowing only two more runs in 6.1 innings.

“It was good to see some runs up in the first innings,” Reynolds said. “We haven’t seen much of that this year so that was good, but we kind of let off the pedal.”

The Great Danes responded in the sixth inning with three runs of their own, cutting their deficit to one run. Zach Clevenger struggled in his one inning of work, allowing the three sixth-inning runs on three hits and putting two batters on with hit-by-pitches.

UMass pitchers excelled most of the afternoon at limiting damage, stranding 12 runners on base, but they could not work out of jams in the sixth and eighth innings.

“We had a couple guys come out today not quite ready to execute,” Reynolds said of his pitching staff’s performance. “Give Albany credit, they took advantage.”

The mid-week game meant that the Minutemen went with a ‘staff day,’ utilizing seven different pitchers, none lasting longer than two innings.

Collin Shapiro reached base three times on the afternoon, tallying two singles and a walk from the top of the UMass lineup. Connor Smith also had a strong day at the plate for UMass, going 2-4 including a double and scoring a run.

Multiple late chances to close out the Great Danes will haunt the Minutemen as the losing streak continues.

“That’s got to be a game that we win there,” Reynolds said.

The Minutemen next take the field Friday against Dayton as they open a three-game road series. The A-10 matchup is set to start at 3 p.m.