Minutemen turn in biggest win of the season 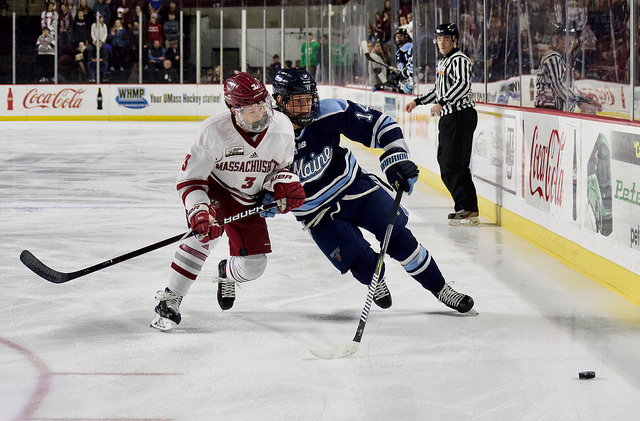 In its final home game of the season, the Massachusetts hockey team came out and steamrolled Maine on Saturday, riding a four-goal second period to a 6-0 blowout win.

Five different Minutemen chipped in with goals as UMass (26-7-0, 18-5-0 Hockey East) dominated from start to finish, with Filip Lindberg making 16 saves in his first career shutout.

“This is one of those trap games after an emotional game on Thursday to secure the regular season championship,” said coach Greg Carvel. “You’re always concerned about how your team’s going to come out, and I think we pushed the right buttons because the guys came out great, I thought [we] controlled the whole 60 minutes maybe as well as we have all year. Shot differential was quite extreme, we put up six, their goalie still made a lot of good saves.

“I was real happy, getting another shutout is a good sign, is that two shutouts in our last two home games? That’s a good sign that we’re playing better without the puck, and I thought other than our power play wasn’t very effective, 5-on-5 we were very good. I know Maine was shorthanded, missing some defensemen, so it was tough for them tonight, but as complete a victory as we’ve had this year.”

Oliver Chau opened the scoring seven minutes into the first period, skating in on a two-on-one and sliding a casual backhander past Maine (14-15-4, 10-9-4 HEA) goaltender Jeremy Swayman, the first of two goals for Chau and the start of a very long night for Swayman.

Ten minutes later, Mitchell Chaffee jumped on a loose puck on a 2-on-0 opportunity before dumping it off to Mario Ferraro on a platter at the last second, and Ferraro made it 2-0 with his second goal of the season.

Bobby Trivigno took up his usual position as UMass’ resident troublemaker, drawing a five-minute major and a game misconduct on Maine’s Rob Michel in the dying seconds of a fairly chippy first period.

The Minutemen couldn’t capitalize on the extended power play to open up the second, but it didn’t matter — UMass buried Maine in the middle frame, pumping four more goals past Swayman to turn a comfortable lead into a hammering.

Anthony Del Gaizo’s fifth of the season made it 3-0 just after the major expired, and midway through the second Ty Farmer managed to force home a rebound to extend the lead to four.

The Minutemen added two more in the last couple of minutes, as Oliver Chau added his second with 2:16 to play before Jake Gaudet finished off a pretty passing sequence to make it 6-0 after two periods. Swayman’s day was done after 40 minutes, as he allowed six goals on 33 shots for the evening.

Lindberg had a relatively quiet night between the posts as the Black Bears only managed 16 shots on goal but he came up big when called upon, his personal highlight coming midway through the second when the freshman netminder made a big save on a partial breakaway to keep his shutout alive.

The second was one of UMass’ finest periods of the season, as it went to the intermission having outshot Maine 19-3, putting the game away and then some.

Though they didn’t extend the lead past six in the final 20 minutes, it was a relentlessly dominant performance for the Minutemen, who posted their largest margin of victory all season.

“As you saw on video, we celebrated pretty hard [on Thursday],” Carvel said. “We wanted to get it out of our system. We told the guys, at 2:30 on Friday, we turn the page, and we did a good job. Assistants did a real good job. We weren’t great on Thursday night, we played well for a couple spurts, that was enough to win the game, there was a lot of video to prove that we needed to play better tonight.

“I think they’re locked into playoff mode now. They’re not going to ease into any games. We’re back to scoring the first goal of the game again, consistently… I think we’re pretty locked in right now.”

UMass will play its final game of the regular season against UConn on Friday, wrapping up the campaign on the road.