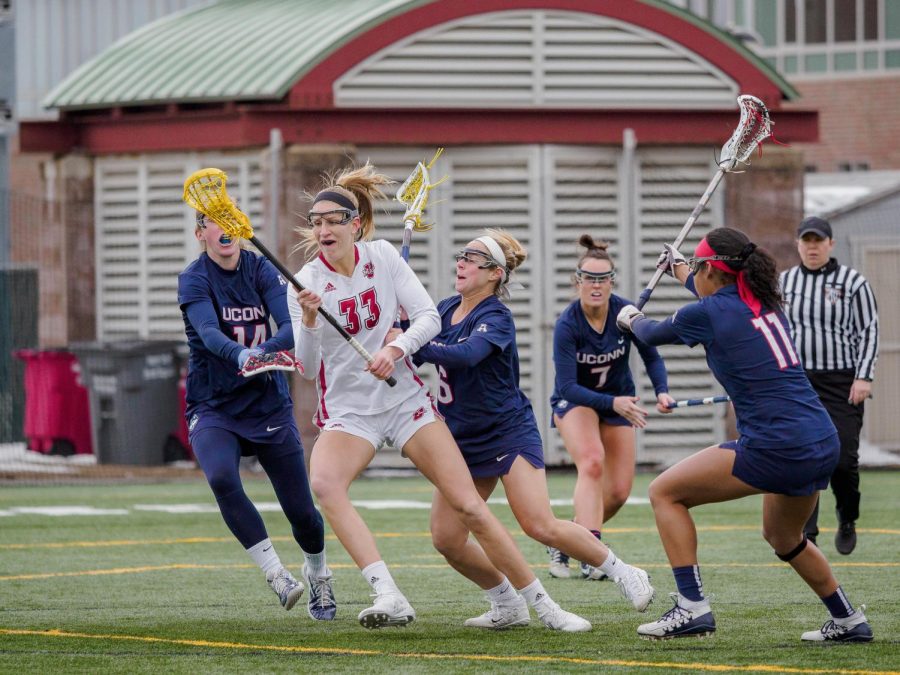 Coming off an impressive win over Connecticut, the Massachusetts women’s lacrosse team looks to keep rolling heading into a home game against Marist on Wednesday.

UMass (2-2) has played Marist (2-2) four times since their inaugural meeting in 2011, winning all five in total. After getting back on track against UConn, the Minutewomen face a potential trap game.

“The one thing I’ll say about Marist, and this has been pretty consistent every time that we’ve played them, is that they fight and they’re not going to back down,” coach Angela McMahon said. “They are going to give us a lot of challenges in a lot of areas of the field. So we need to make sure that we’re focusing on ourselves and keeping a really high level of intensity throughout the whole game.”

Last year, the Minutewomen earned a convincing 19-10 win over Marist on the road, winning nearly every statistical category. UMass’ high-powered offense was the story of the day, as the Minutewomen jumped out to a 7-0 lead and ultimately took 51 shots, 41 on goal, to overcome 22 saves by Marist goalkeeper Delaney Galvin.

A similar model has emerged over the first four games of 2019, as Harvard and UConn each notched 15 saves against UMass as the Minutewomen rely on a high volume of shots.

“We’re focusing on the efficiency,” McMahon said. “We’ve seen that we’re capable of getting a lot of shots and being really aggressive, but sometimes we need to make sure we’re working for the best shot. Making a goalie work for 17 saves, instead of just shooting at her stick.”

The primary beneficiary of that high-powered offense thus far has been redshirt senior Kiley Anderson, who scored nine goals against UConn to set a new program record. Anderson was unstoppable inside against the Huskies while also dominating the draw circle, as UMass pulled down 23 of 33 draw controls.

“Whether on the draw control, whether that’s her playing offense, I think we’re really going to see teams step up and focus in on her,” McMahon said. “But we feel really confident about the other people that are going to be out on offense with her, that anyone can score at any time.”

Draw controls have been a point of emphasis for UMass since losing to No. 1 Boston College, when the Eagles overpowered Anderson and the Minutewomen in the first half to control possession and build up an early lead. In that game, Anderson was ultimately switched out for Caitlyn Petro in the draw circle, in part to maximize Anderson’s ability on attack.

Since then, Anderson has taken most of the draws for UMass while continuing to lead the Minutewomen in scoring.

“She’s carrying a lot,” McMahon said. “She has a lot of weight on her shoulders right now in terms of the draw, but we’re trying to elevate others. When it comes to draws it’s not just that one person, it’s what the other people around them in the circle are doing, whether it’s to help them get the best advantage to get the ball or whether it’s them coming up with the ball themselves.”

On the defensive end, younger players are carrying the Minutewomen. Freshman Gina Carroll is slated to start in goal against Marist, her fifth straight start to open the season, as incumbent Lauren Hiller has been out with an injury without a concrete timeline to return. McMahon also highlighted freshman Amy Moreau, who started on defense against UConn.

“[Moreau] had limited time in the beginning, just kind of getting her feet wet, but she’s been stepping up,” McMahon said. “Being really aggressive and has played a great role for us, so we’re hoping she continues to do so, along with some of the other younger players, like Gina and other players that are getting opportunities out there.”

Game time is scheduled for 3 p.m.